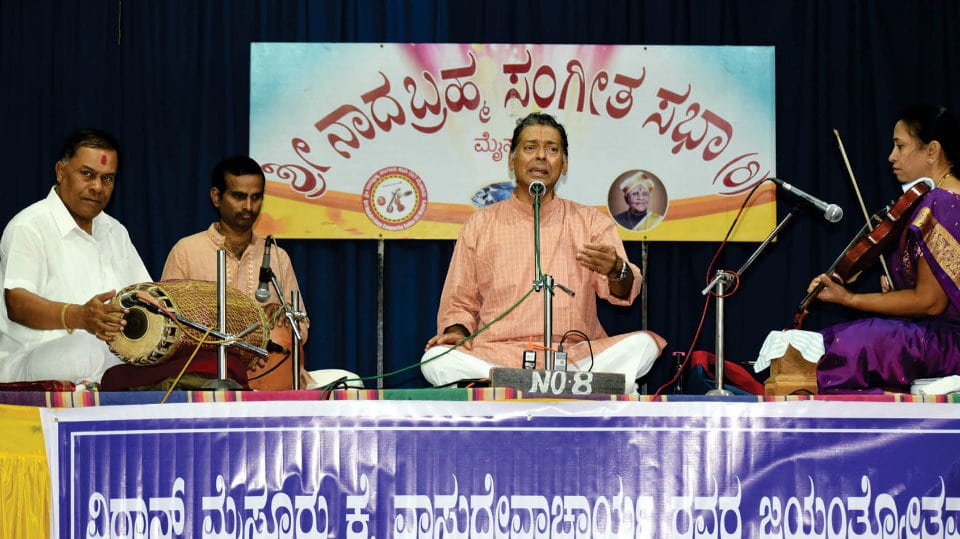 A powerful voice with effective vocalisation

N.R. Prashanth sang for Nadabrahma Sangeetha Sabha on the 28th of May. The occasion was 154th Jayantyotsava of Mysore Vasudevacharya, in whose name the auditorium is built. He was accompanied by Nalina Mohan from Bengaluru on the violin, Cheluvaraju, also from Bengaluru, on mridanga and S. Manjunath from Mysuru on the ghata.

Prashanth has many major assets to his credit — good coaching from stalwarts like Titte Krishna Iyengar, Neela Ramgopal and R. Vishweshwaran, a masculine and yet controlled voice, perfect shruti alignment, a powerful voice, sense of using gamakas in the right proportion, good imaginative skills, dignified stage manners,  a commendable hold on laya and the experience of performing for prestigious concert platforms.

Take for example his Ranjani, which had great appeal, in which he presented Mysore Vasudevacharya’s ‘Pranamamyaham Shri PraaNa natham Nirantaram’ in Mishra Triputa tala for which short but intellectual swaras were developed. If Arabhi  is hardly taken up by musicians today as a main item because it has less scope to elaborate, Prashanth proved it wrong. The ragalapana was marked with raga purity. ‘O Rajeevaksha’ by Tyagaraja was rendered beautifully with also a neraval and well-knit swaras at ‘Nera Nee NaPai’ followed by taniyavartanam. Nalina on the violin, Cheluvaraju on mridanga and Manjunath on ghata added a lot of sheen to the concert.

The RTP in Shanmukhapriya was set to Trishra Jati Jhampe tala. The raga was full of essence though the artiste faltered a couple of times during the tana rendition. ‘Sharavana Bhava Guhane Shiva Shanmukhane’ was the pallavi, rendered in a simple and traditional manner with no colours added.

A devaranama of Purandara Dasa, ‘Kaliyugada mahimeyu Kanabanteega jalajaksha Shree Venkatesha’ which is so well composed that it could even be taken up as a sub-main item in a concert and a tillana by Mysore Vasudevacharya formed the concluding part of the concert.