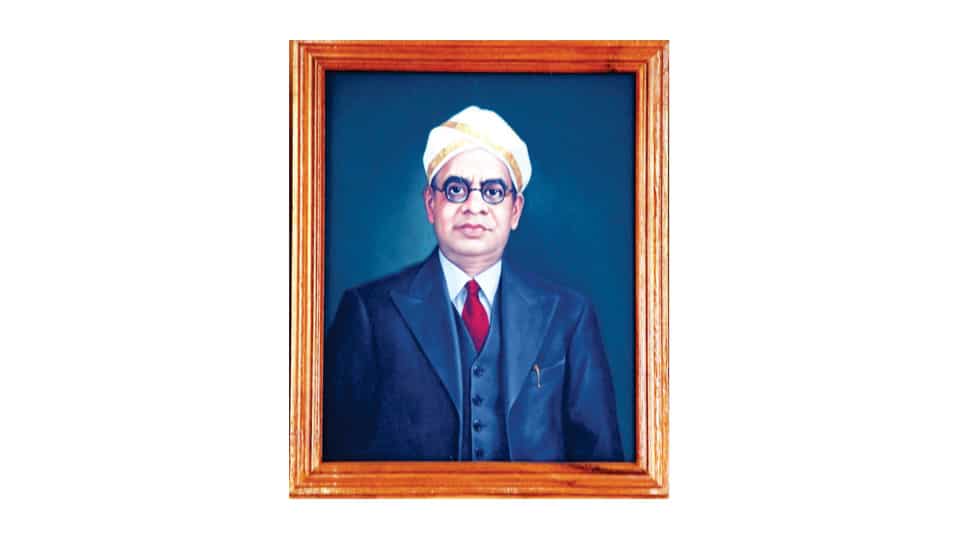 Poet Laureate Rabindranath Tagore described him as a Prince among Men! Trained under Alfred Marshall and a close friend of renowned economist Maynard Keynes, N. S. Subba Rao embodied the very best of the intellectual traditions of Cambridge University. He was a visionary educationist who served the University of Mysore as a Lecturer, Professor, Principal and Vice-Chancellor across three decades. His foresight and landmark contributions in shaping the nascent University paved the way for the next generation of poets, writers and intellectual giants to appear on the scene — the likes of Kuvempu, Ti Nam Sri, S. Srikanta Sastri, G.P. Rajarathnam, T.S. Venkannayya and so on. Here is a small tribute to this visionary genius. —Ed

N.S. Subba Rao was born on 14th March 1885 at Srirangapatnam. His father Nanjanagud Subba Raya was a lawyer by profession. N.S. Subba Rao’s elder brother N. Narasimha Murthy (M. A., B. L.) was also well-versed in law and worked in the British Resident Mr. Fraser’s office at Mysore. Subba Rao also had a younger sister by the name of Kaveramma.

He had his schooling at Sri-rangapatnam. Completing his matriculation exam in 1897, Subba Rao joined Central College, Bangalore for his F.A. course where he was nurtured well by Prof. J.C. Tate, who is believed to have counted him one among his favourite students ! N.S. Subba Rao with a letter of recommendation from J.C. Tate proceeded to Madras Christian College to pursue his B.A. degree. Here, he came under the influence of Rev. William Skinner and Rev. Earle Monteith MacPhail, who were senior members of the faculty.

He was conferred a Gold Medal in 1904 for securing highest marks in the B.A. exam, the award being Benjamin Jowett’s “Dialogues of Plato” volume, something which he treasured till the end. Following his commendable performance in the B.A. exam, he was able to secure from the Mysore Government the prestigious ‘Damodar Das Educational Scholarship’ which helped him on his way to England for further studies.

Armed with a scholarship, he was able to gain admission into St. John’s College, Cambridge, to pursue a M.A. degree in Economics. Here, he additionally learnt Latin and French. At Cambridge, Subba Rao came under the tutelage of Alfred Marshall and came in contact with Maynard Keynes. At the end of four years, Subba Rao completed his Tripos exam (M. A. Cantab.) in addition to securing a Bar at Law qualification. His essay titled “Political and Economic Conditions of Ancient India, as described in the Jatakas” earned him the prestigious ‘Le Bas’ award in 1909.

During his Cambridge years (1905-09), Subba Rao travelled to France, Germany and few other countries on the continent. The lasting impression that Subba Rao left behind at Cambridge would win him lifelong friends — the most prominent among these being Maynard Keynes, the great economist of his time! Keynes went so far as to recommend to the India Office at Calcutta, that a senior position be afforded to this fine gentleman in Her Majesty’s Government in India, an offer which Subba Rao kindly declined. His refusal was not so much a decision arising out of an inability to execute the new-found responsibility in governance, but more so an apprehension that his desertion of his obligation to the University of Mysore (UoM) would not go down well with the Maharaja, whose generosity had made his westward sojourn possible in the first place!

N.S. Subba Rao would write many a letter of introduction to successive students who wanted to study in England in the years to come. Many of them later expressed their surprise and amazement at the warmth and affection a simple letter from Subba Rao would elicit in the educational fraternity in England.

An eminent linguist A.N. Narasimaiah after experiencing such goodwill remarked thus: “I came to London through Germany and joined the Ph.D class at London University with the help of N.S. Subba Rao’s letter of introduction. He is so much loved and respected here by all the educationists.” Incidentally, upon his return to India, when the Diwan of Mysore assembled all the newly returned students from England and enquired as to what each wished to become in the years to come, Subba Rao’s answer was one that caught the Diwan’s undivided attention. He said, “I want to be the next Diwan of Mysore!”

N.S. Subba Rao returned to India on 28th October 1909. The next year, that is 1910 at the age of 25 years, he was appointed as a lecturer in Economics at Maharaja College, Mysore, which was then under Madras University. Here, he taught Economics, Political Science, European History and English literature. Among his foremost students during these years was V. Seetharamaiah.

The University of Mysore would formally come into existence on 25th July,1916. By 24th September of the succeeding year (1917), Subba Rao took charge of Principalship from C.R. Reddy and held the post till 1928. In 1919, he was invited to foresee the establishment of the State University in Ceylon — a task which won him much gratitude from the local Sinhalese intelligentsia. In July 1927, Subba Rao attended the Educational Conference as representative of the Mysore Government. His presentations and lectures won him considerable praise in Forewords written subsequently by K. Myathen and E. G. McAlpine.

In his years immediately after returning from Cambridge, Subba Rao maintained a close correspondence with Maynard Keynes and Arthur Cecil Pigou. In one such letter, Subba Rao laments thus:

I found that a good many officers in the Secretariat (in the Mysore State Government Offices) had read your papers in the ‘Economic Journal’ and in the ‘Madras Mail’— which surprised me, as we do not pretend to be up to date here! I miss Cambridge itself. I did not think I had become so fond of the place… You will not believe me if I tell you how often I am back at Cambridge in my waking thoughts and dreams.

N.S. Subba Rao served the University of Mysore for close to 32 years as Lecturer, Professor, Principal and eventually as its Vice-Chancellor from 1937 – 42. His contributions as an administrator while at the University are far too many to elaborate here. His encouragement for Scouts and Guides movement is well-remembered. The establishment of University Co-operative Society in 1923 was a positive step in the direction of looking after the financial travails of a poorly remunerated academic fraternity. Subba Rao unfailingly espoused the cause of Kannada language while championing the idea of imparting western scientific education in the native vernacular. In this direction, by July 1935 he introduced Kannada medium of instruction in High Schools across the State.

During his years as Vice- Chancellor of the University of Mysore, N.S. Subba Rao is remembered to have remarked thus to Ti. Nam. Sri: “Lectures and speeches, however well- delivered, last only for a brief period in the hearts and minds of people. If one were to create a lasting legacy, then one has to ‘publish’ these in print and hence a dedicated publishing division was required.” This longing resulted in Subba Rao foreseeing the establishment of a dedicated publishing and cataloguing wing, which would later come to be known as ‘Prasaranga’!

4 COMMENTS ON THIS POST To “A Visionary Educationist of Mysore -1: Rajakaryapraveena N.S. Subba Rao”