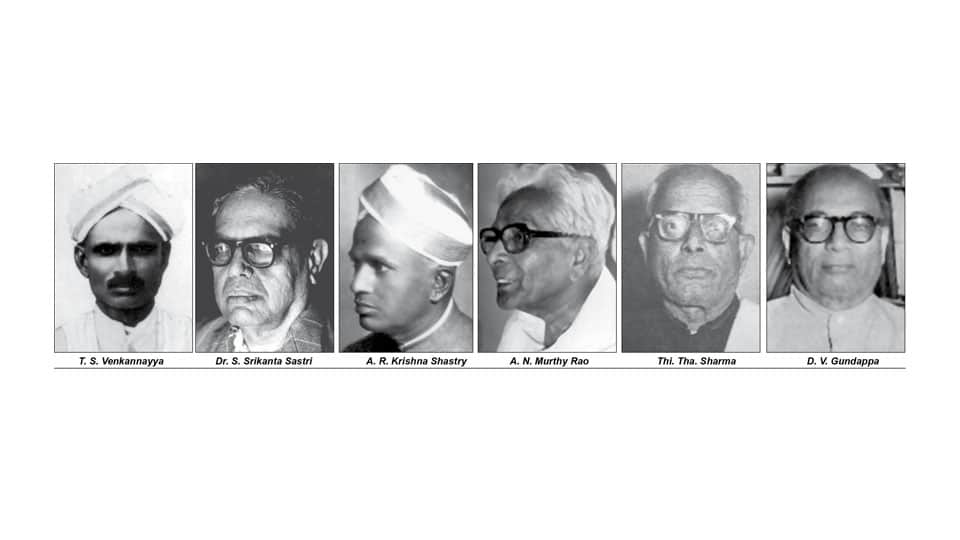 T.S. Venkannayya’s inclusion into the faculty at Maharaja College was thanks to Prof. N.S. Subba Rao’s foresight. When B. Krishnappa passed away, there was a vacant Assistant Professor position at Maharaja College, Mysore. While many candidates were considered in the meeting, Subba Rao is credited with the statement: “Venkannaya is a man with a feel for literature — of a very rare type. In many ways, he resembles the best Professors in the prestigious Universities of the West.” T. S. Venkannayya’s legacy on the Kannada Depart-ment and his subsequent nurturing of Kuvempu merit another article in its entirety!

Prof. N.S. Subba Rao’s good student Dr. S. Srikanta Sastri (the future historian) was awarded the first research scholarship of the University. He wrote “Sources of Karnataka History, Vol I” and it was meant to be published by Prasaranga. The manuscript was borrowed by an eminent scholar who lived in a far away city. Unfortunately, he never bothered to return it! Dr. Sastri wrote the book again and this time a famous archaeologist borrowed it on the pretext of reading it and never returned it.

When Prof. N.S. Subba Rao became the Vice-Chancellor of University of Mysore, he requested Dr. Sastri to write it for the third time. Because of Subba Rao, it came to be published by Prasaranga in 1940. Later Dr. Sastri wrote Vol 2. and Vol 3. in this series — sadly, these manuscripts are missing today.

During A.R. Krishna Shastry’s tenure as Editor of ‘Prabhuddha Karnataka’, it was at Subba Rao’s insistence that the magazine sought to follow certain tenets which would keep it in good stead over the next few decades — these being that the issue should always come out on time, that apart from literature it should also include content on non-literary aspects of political life and most importantly to include and involve people and contributions from areas immediately outside the Mysore princely area as well.

N.S. Subba Rao chaired a meeting with Thomas Denham and Radha Kumudh Mukherjee in 1918 towards establishment of University of Mysore library. Later, he would spearhead the development of Mysore Government Central Library along with B.M. Srikantaiah and M. Venkatakrishnayya.

All throughout his years at the University, people remember seeing him in a crisp navy-blue suit, moving about with an imposing stride with books clasped in both hands. Often criticised by his peers for being too anglicised in his ways and mannerisms, A.N. Murthy Rao notes that in the decades hence, Subba Rao did embrace Indian mannerisms in almost all walks of life, including his dress. Subba Rao entertained many students at his Lakshmipuram house in Mysore with witty banter and engaging intellectual conversations which would often grow late into the night. He would feed them sumptuous meals before seeing them off. His concern for poor students saw him come up with the ‘College Library Scholarship Fund.’

N.S. Subba Rao had an artistic conscience of his own! In a candid conversation with A.N. Murthy Rao, he is believed to have remarked thus: “Sometimes, positions of power — Professorship, Principalship and later Vice-Chancellorship — ought not to come early. Because they came in rapid succession and quite early on in my case, probably my creative and scholarly output fell short of what it could have been otherwise!” His lacking when it came to scholarly or creative output over the decades troubled him in his quieter moments. Along with Murthy Rao and B.M. Srikantaiah, Subba Rao is remembered to have frequented Rallapalli Anantha Krishna Sharma’s house quite often to listen to his music.

By 1930, it had become something of a staple feature for every budding theatre artiste to emulate and mimic the famous A.V. Varadachar. While this was no doubt a testament to the famous thespian’s enduring legacy, the all too repetitive enactments of Varadachar’s mannerisms on stage became an embarrassment to the University theatre scene. Subba Rao had to step in and politely remind the young artistes that to imitate the inimitable A.V. (Varadachar) was indeed a poor man’s game!

READ ALSO  A grandson's tribute to his dearest grandmother: A Silent Sentinel

In 1933, T.S. Venkannayya had arranged a debate competition on Hosa Kavya in front of the Central College campus at Bangalore. N.S. Subba Rao was the Chairperson and Maasti was the guest of honour. There ensued a heated debate between Thi. Tha. Sharma and B. M. Srikantaiah on Hosa Kavya poetry in Kannada. When things seemed to be getting out of hand, it was thanks to Subba Rao’s timely intervention, that Maasti was given the opportunity to deflect the entire course of the event with regaled humour and endless anecdotes. After a hiatus of about twenty minutes, the tense atmosphere seemed to ease a bit and both Sharma and Srikantaiah shook hands in a spirit of reconciliation!

When D. V. Gundappa (DVG) was Secretary of Kannada Sahitya Akademi and there was an opportunity to sponsor Subba Rao on a literary tour of Maharashtra at the Sahitya Akademi’s expense, D.V.G. was faced with a dilemma. The literary trip would entail a cost of nearly 600 rupees. This was at a time, when the Sahitya Akademi’s finances were looking quite bleak thanks to many wealthy merchant donors pulling out at the last moment!

D.V.G. did not have the heart to convey this predicament to Subba Rao. Yet, Subba Rao came to know about this through other sources and at once wrote to D.V.G. to abandon his attempts at financing his trip on behalf of the Akademi. Subba Rao took it upon himself to fund and plan the whole tour, hoping not to burden the Kannada Sahitya Akademi in any way! D.V.G. would remember this kind gesture for many years as a testament to this man’s spirit of generosity.