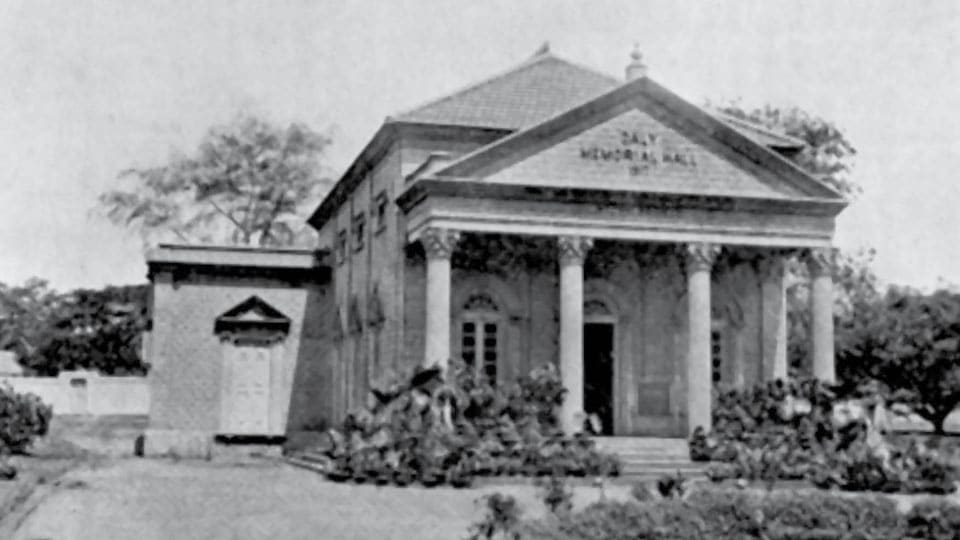 A Visionary Educationist of Mysore -3: Prof. N.S. Subba Rao, a Prince among Men

N.  Ananthachar following his marriage moved to Bangalore for better prospects. Apart from odd jobs at Government offices and the like, he was sadly unable to make a decent living in Bangalore. Not one to lose hope, he set up a vegetable shop next to present day ‘Vidyarthi Bhavan’ in Basavanagudi. His clientele included the likes of Divan Madhava Rao, M. Visweswaraiah, Garudachar, Kodanda Rao, N. S. Subba Rao, B.P. Wadia, Thathachar and Navarathna Ramarao! Impressed by Ananthachar’s diligence and reserve of knowledge, they introduced him to M.N. Krishna Rao who managed to source a loan of 100 rupees to help matters. Instead of investing this into his vegetable shop, Ananthachar persuaded his wife to use this start up fund to establish a small school which later mushroomed into a college and now stands as Acharya Patashala Institution. 5th cross road in Hanumanthanagar, Bangalore, still bears Subba Rao’s name to it as well.

In the Silver Jubilee year celebrations of the University of Mysore (1941), G. P.  Rajarathnam was to feature in a lead role in a drama competition. Among the guests of honour were the Chancellor himself, HH Nalwadi Krishna Raja Wodeyar. Knowing the Maharaja’s penchant for poems by Ranna, Subba Rao made his way into the green room minutes before the drama was supposed to begin and advised young Rajarathnam to recite two popular verses of Ranna at the end of his Act. Rajarathnam agreed to this and happily recited two verses from one of Ranna’s popular compositions at the end — this went down very well with the Maharaja causing him to break into a sly smile and a thunderous clap of his hands!

When G.P. Rajarathnam had completed writing “Purusha Saraswathi”, he had no idea as to how to get it into print. He decided to approach T.S. Venkannayya who in turn decided to take him to Subba Rao for further guidance. Subba Rao gave them a thirty-minute appointment on a Sunday morning. After some pleasantries, Subba Rao very tersely asked young Rajarathnam to read a few pages from the section on ‘Karna Nataka Purana’.  To put it into context, this was the time when a heated debate was going on between how ‘Karnataka’ ought to be spelt in Kannada script! Subba Rao was so impressed with the young writer’s rendition, that he asked him to read the whole script over the next two hours!! At the end of this, he looked at Venkannayya and instructed him to get it published in ‘Prabhuddha Karnataka’ and then to get 250 additional offset copies for circulation. Thus, came into print, Rajarathnam’s ‘Purusha Saraswathi’. Decades later, Rajarathnam would recollect this incident and remark thus: “I was but a meagre 60-rupee Kannada pandita at that time — nothing more! Thanks to Subba Rao’s impetus, I was launched on to the Kannada literary landscape.”

He had a lifelong association with B.M. Srikantaiah and both of them had been instrumental in founding the Srirangapatna chapter of ‘Tarunara Dandu’, many years ago. Now they would team up again to bring into existence a full-fledged Kannada Department at the University and in the constitution of a dedicated Kannada syllabus for the first time. They would also be instrumental in creating an intellectual space for the publication of Kannada writing by effectively bringing into existence ‘Prabhuddha Karnataka’.

B.M. Sri’s Kannada tran-slations of English poetry titled ‘English Geethegalu’ first came out in serial series in ‘Karnataka Granthamale’. Subba Rao zealously collected these and got them bound in a Gold tilted edition as a tribute to his good friend of yore. This was Subba Rao’s way of paying a tribute to his fond friend while expressing his unbridled joy at seeing some of his favourite pieces of English poetry appear in Kannada!

Subba Rao was Director of the Department of Education from 1928 till 1935. He was among the very few who held the rare distinction of having been a teacher for over three decades before adorning the post of Director of Department of Education! This unique vantage point gave him a priceless perspective both as a teacher and also as an administrator. This experience on both sides of the aisle, enabled him to come up with many insurance and monetary schemes, later on, which would enable many a discerning academician of the University find the much-needed financial succour for their personal expenses, which otherwise was out of their reach! During his tenure as Director, he invited Maasti to be one of the senior members in the sub-committee responsible for the formulation of Kannada syllabus for students.

When the Father of Modern Yoga – Tirumale Krishnamacharya approached Subba Rao with his unrequited wish of not having a dedicated school for Yoga in the Princely State of Mysore, he at once took it upon himself to persuade the Maharaja to personally help in any way possible. The Maharaja gave a portion of Jagan Mohan Palace to start a school of Yoga free of cost! — thus was born the first formal Yogashala in Mysore!

Under Sir Brajendranath Seal’s Vice-Chancellorship, Subba Rao contributed significantly as a member of the Council for Political Reforms from 1926 – 27. As Member of the Textile Tariff Board, he was able to bring to the table his expertise in economic theories and principles, managing to ensure a fair price for both cotton growers as well as textile merchants. Accompanying Sir Mirza Ismail to the London Round Table Conference (1930 – 32), Subba Rao played a crucial role in the eventual formulation of the landmark ‘Indian Constitution Act’ of 1935. His foreword to M.N. Srinivas’ “Marriage and Family in Mysore” is considered a seminal work in itself!

In 1929, he was invited to deliver a guest lecture at the ‘Indian Economic Association’, Allahabad. Between 1932 – 33, Subba Rao had the distinction of being invited to deliver a series of lectures on ‘Some Aspects of Economic Planning’ as part of the Madras University Sir William Meyer Lecture Series. Subba Rao presided over the twenty- first Kannada Sahitya Sammelan at Bombay in December 1935. Nicknamed ‘Raja’ by peers and alike at Cambridge, he was once described by Poet Laureate Tagore as thus: ‘He is a prince among men!’  He was appointed as Honorary Secretary of ‘Inter-University Association’ at the national-level between 1923-25. In recognition of his lifetime contribution to the Princely State of Mysore, HH Nalwadi Krishna Raja Wodeyar conferred on N.S. Subba Rao the title of ‘Rajakaryapraveena of Gandabherunda Order’ in 1937. He was later requested to preside over the ‘All India Educational Conference’ in 1931. In 1940, he delivered the inaugural address of the ‘All India Economic and Political Congress’ at Mysore. Three years later in 1943, he was invited to deliver ten successive lectures on ‘Rural reconstruction in India’ at Delhi University as part of ‘Sir Kikibhai Premchand lecture series’.

In 1910, he delivered a lecture at Mythic Society, Bangalore elaborating on the paper which he had published while at Cambridge and which had won him the prestigious ‘Le Bas’ award. His lecture would later be published in the Quarterly Journal of Mythic Society in the same year. Incidentally, Subba Rao would maintain a lifelong association with Mythic Society ultimately presiding over as its Secretary from 1939-42.

Subba Rao’s hectic lifestyle took a toll on his health. There was precious little time for exercise apart from some tennis which he enjoyed. Added to this already brutal regimen was many a successive trip abroad. In many respects, he was as busy or probably more so in his retirement as he was while in service! At the age of 58 years, Subba Rao breathed his last on 29th June 1943 at Bangalore. One of his close confidants described him thus in his obituary: “Mr. N. S. Subba Rao was a man of great parts, a large and generous heart, a loyal friend and above all a true patriot”. Men of his calibre, integrity and generosity of spirit are the need of the hour today!

A Visionary Educationist of Mysore Dr. Bhagirath S. Naganath Mysore Memories Prof. N.S. Subba Rao
Listen to Electron and his brothers
How To Turn Off Political Ads On Instagram

ONE COMMENT ON THIS POST To “A Visionary Educationist of Mysore -3: Prof. N.S. Subba Rao, a Prince among Men”