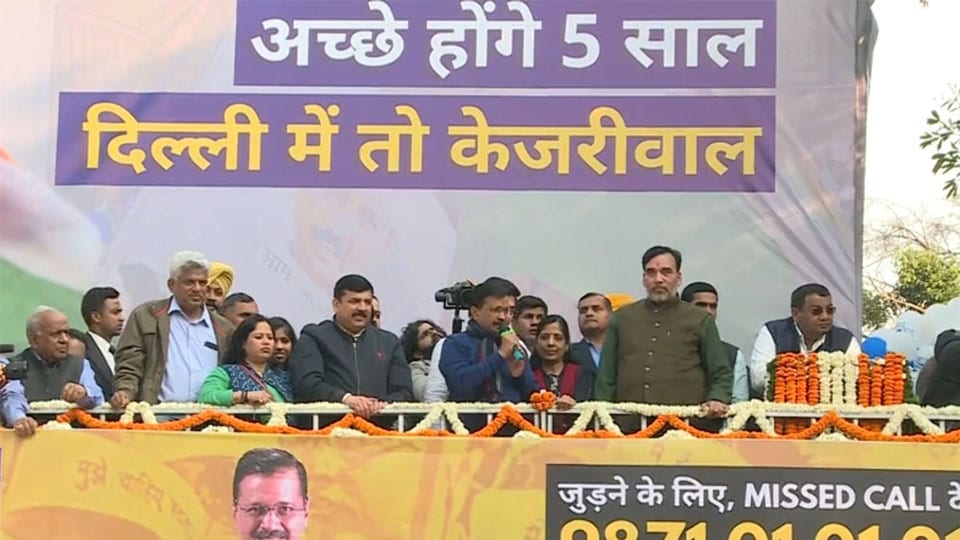 New Delhi: Arvind Kejriwal’s Aam Aadmi Party (AAP) surged ahead of BJP towards a thumping victory in Delhi — a hat-trick — as counting of votes progressed this morning, but remained short of the 67 it won in 2015.

An aggregate of five exit polls had given AAP 56 seats. The BJP, after a slow start, made steady gains but remained a distant second. And it is a duck for Congress for the second consecutive time. Interestingly, Congress had ruled Delhi for three consecutive terms from 1998 to 2013 under late Sheila Dixit.

As AAP started building a stage for its victory speech, State BJP Chief Manoj Tiwari, who predicted 55-odd seats for his Party, reminded supporters that many rounds of counting are still to come.

Among the heavyweights leading in various Constituencies are AAP’s Rakhi Birla, Ragav Chaddha, Satyender Jain and Kapil Misra who changed camp from AAP to BJP.

In an up-and-down battle, Manish Sisodia trailed by 1,427 votes from his nearest rival, BJP’s Ravinder Singh Negi around noon. Sisodia is number two leader in AAP and as Deputy Chief Minister of Delhi he held all key portfolios in the AAP Government.

AAP, which accused the BJP of polarising the voters over the Shaheen Bagh protests, said the results indicated that the “real nationalism is to work for the people”.

“Our victory will prove that real patriotism is that if you get the opportunity in politics, you must work for people. Work on education, hospitals… Delhi will prove that if a Government works sincerely, then it can win,” Sisodia said.