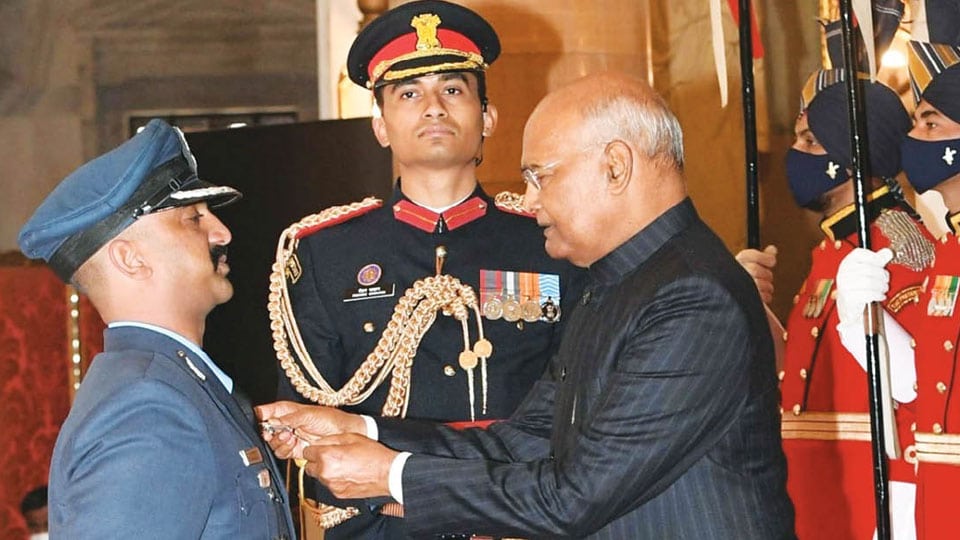 New Delhi:  Indian Air Force (IAF) Group Captain Abhinandan Varthaman, who downed a Pakistan jet during an aerial combat in February 2019 at the Line of Control (LoC) and was held captive for three days, was awarded the Vir Chakra by President Ram Nath Kovind in an investiture ceremony at Rashtrapati Bhavan in New Delhi this morning. Vir Chakra is India’s third highest wartime gallantry award after Param Vir Chakra and Maha Vir Chakra.

He was captured by Pak Army on Feb. 27 2019 after his MiG-21 Bison jet was shot down in a dogfight with Pak jets at Balakot sector. Before his jet was hit, he downed a Pakistani F-16 fighter.

Abhinandan, scripted military aviation history by downing an F-16, seconds before his own MiG-21 Bison was hit by a missile, forcing him to eject. Experts had hailed it as the first ever kill of an F-16 by a MiG-21 Bison – fighter jets. He was taken into custody by Pak Army. India demanded his safe return and Pakistan Army was forced to release him.

Abhinandan’s citation read, “Displaying exceptional air combat acumen and knowledge of the enemy’s tactics, Abhinandan scanned the low-altitude airspace with his airborne intercept (AI) radar and picked up an enemy aircraft that was flying low to ambush the Indian fighter interceptor aircraft… Abhinandan alerted the other formation pilots towards this surprise threat.”