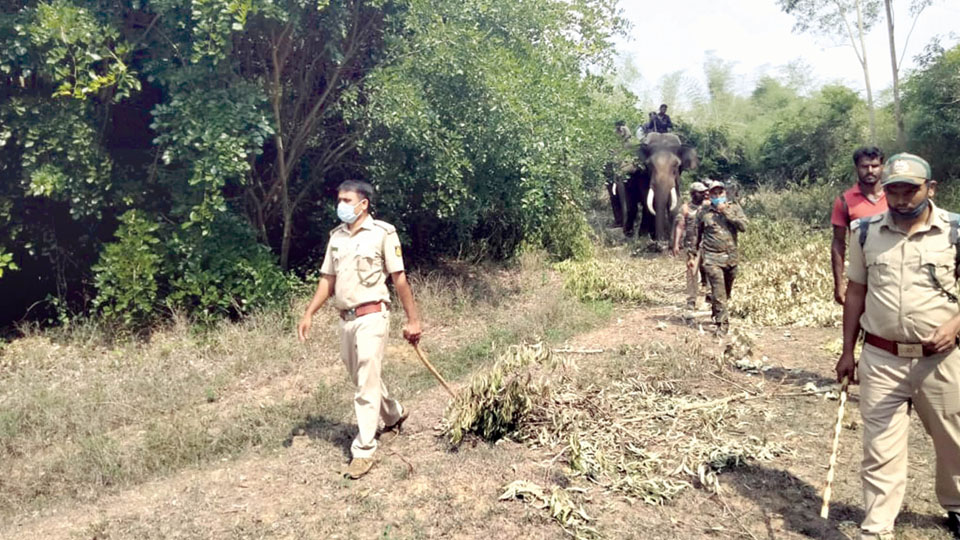 On Wednesday afternoon, the tiger attacked a herd of goats that were grazing at Hanumanthapura in Doddahejjur and killed a goat before fleeing into the forest. On Monday night, the tiger had entered the cowshed belonging to Devaraju at Dasanapura and killed a cow. The tiger had killed about four cows in this region since a week.

The goatherds, who had fled from the spot on seeing the tiger attacking the goats, informed the matter to the villagers, who rushed to the spot in large numbers. The tiger, which was hiding nearby, began to growl and roared numerous times giving a fright to the villagers who had assembled there. The villagers then demanded the Forest officials to trap the menacing tiger.

While they were inspecting the spot, where the tiger had killed a goat, the tiger, which was hiding nearby, attacked the ACF and the RFO, who escaped from the tiger miraculously.

Finally, tamed elephants Krishna (Mahout Chandra and Kavadi Harish) and Gopalaswamy (Mahout Srujan and Kavadi Manju) from Mathigodu Elephant Camp located at Thithimathi in Kodagu, were brought to the spot and a combing operation was conducted in the evening but was suspended following darkness.

The tiger combing operation once again resumed this morning and was in progress, when we went to the press at 2 pm.