Home » News » “First supply oxygen to Mysuru, then to other Districts” 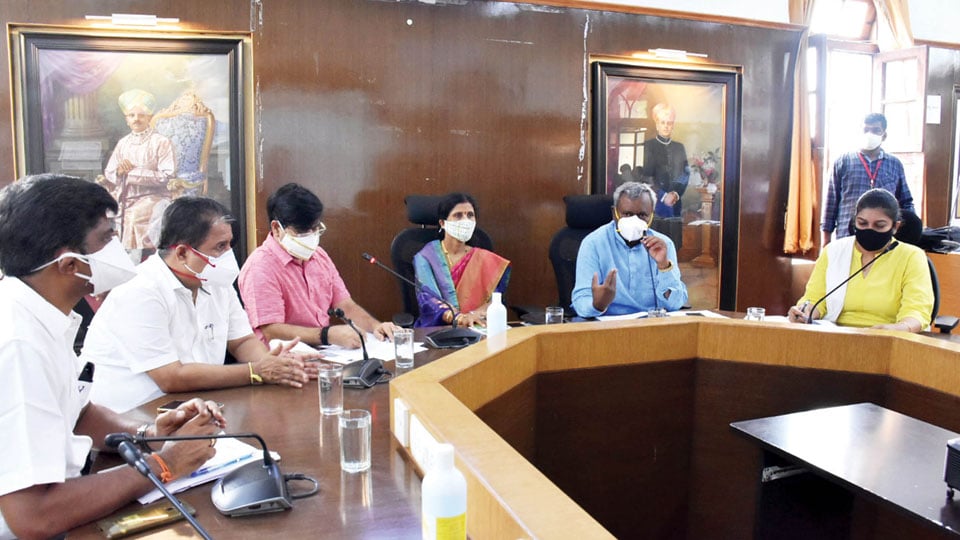 “First supply oxygen to Mysuru, then to other Districts”

Mysore/Mysuru: All medical oxygen manufacturing plants and refilling units have been strictly told to meet the demand of Mysuru District first and then to address demand from other districts, said Co-operation and District in-Charge Minister S.T. Somashekar.

Speaking at a meeting held at MCC premises here this morning to review COVID-19 situation in Krishnaraja (KR) Constituency, he said as of now, there was no shortage of oxygen in district. All steps will be taken to ensure that a Chamarajanagar-like tragedy  will not occur in any Hospital in the State. Two Nodal Officers, one for oxygen and another for Remdesivir injection, have been appointed. Besides, oxygen manufacturing and refilling plants have been told to first supply to Mysuru District and later to other districts, he said.

The Minister said with a view to checking the misuse of Remdesivir injection, it has been decided that every Hospital, be it Government or Private, has to place an order for the injection in the patient name. The Government will deliver the vial in his/her name. Unfortunately, some miscreants were misusing the situation by selling the injection for thousands of rupees in black market. To check this, a Task Force headed by Mysuru-Kodagu MP Pratap Simha has been constituted, he stated.

Somashekar said Private Hospitals have surrendered around 740 beds as against 1,429 beds. Suttur Seer has been requested to reserve 100 beds for Covid patients but he has agreed for 28 beds.

KR MLA S.A. Ramdas, who presided over the meeting, expressed grave concern over Corona positive patients moving freely on the streets. He gave an example of a person in his Constituency who came running to his office to complain about his father  missing from COVID Care Centre. After sharing information with the Cops, the missing man was found walking back to his house. Later, the missing person’s son informed that he too was a positive patient.

According to an estimate, his KR Constituency had 3,265 positive patients. It was better to put up a white flag on the houses of Corona positive patients or those under home quarantine for easy identification. Fine must be imposed on those who come out of houses, he added.

Two ambulances will be stationed from tomorrow for the sake of needy patients. The Health Department officers must share information about the availability of beds in both Government and Private Hospitals for shifting patients depending upon their health condition, the MLA said.

Mysuru City Corporation Commissioner Shilpa Nag said Ward-level Task Force will be constituted under the Chairmanship of the area Corporator. The Task Force will have a doctor, Police and volunteers. They will strive to bring down positive cases in their respective Wards.

District Health Officer Dr. T. Amarnath has revealed that nine new-born babies have tested Corona positive and warned that the number may increase in coming days.

Speaking at the COVID review meeting here this morning, he said Smt. Lakshmidevamma Shankarashetty Maternity Hospital in Jayalakshmipuram had been converted into Covid Maternity Hospital since May 1. This Hospital has 30 beds and all of them are filled now.

Other Hospitals have been requested to reserve beds for normal delivery cases. Those who want ICU, ventilators and oxygenated beds, were accommodated in Cheluvamba Hospital.

Meanwhile, it was found that nine new-born babies have tested positive. To house more number of pregnant women, the District Administration must reserve beds in Seth Mohandas Tulsidas Hospital where Covid Health Centre has come up, he added.