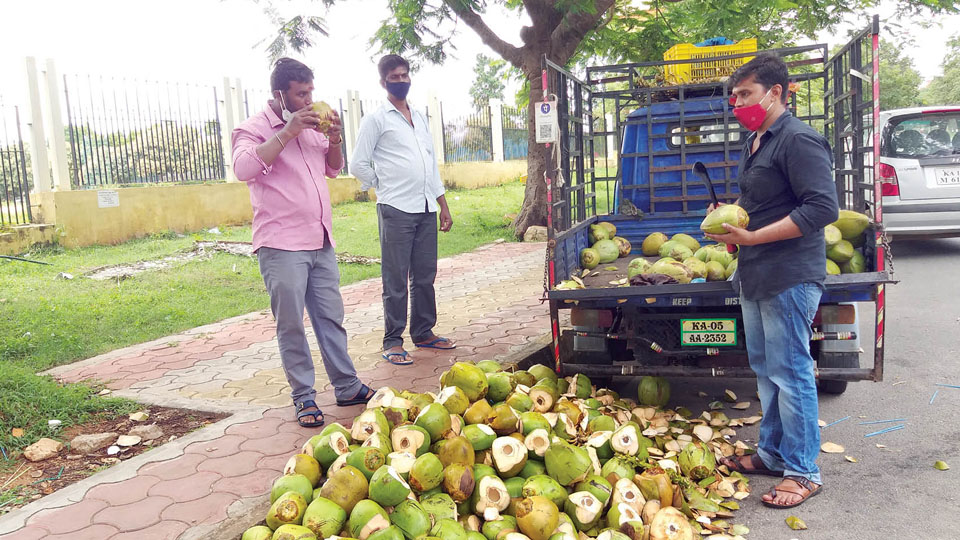 Acid test for city as tender coconut is in short supply

If you are thirsty to the core or want to get relief from excessive body heat and wondering why you are unable to find your favourite tender coconut water by the roadside, blame it on short supply as all the tender coconut produced in the Mysuru-Mandya-Channapatna belt are being sent to other places and Mysuru is receiving only a part of the stocks.

The usual tender coconut vending places in the city are not dotted with vendors ready to chop the most desired and the healthy nut with a green pile of stocks either in the goods autos or on the ground. At most of the places you only find discarded and rotting coconut shells.

Even if you manage to find a vendor, he will ask you to pay Rs. 40 or even Rs. 50 per nut. Mysuru gets its share of coconuts from villages around the city like Hullahalli, Kadakola, Srirampura, Jayapura, Nagawala and even from Mandya, Maddur, K.R. Pet and Channapatna. But since the last one month, the nuts are in short supply and whatever is produced is being sent to Bengaluru and parts of North Karnataka.

Looks like people have been downing tender coconut down their throats to the maximum after the second wave of the pandemic. The usual spots of tender coconuts like Krishnaraja Boulevard, Agrahara, Chamundipuram, Ballal Circle, near Crawford Hall, Chamarajapuram Railway Bridge, Jockey Quarters, Yadavagiri Circle, Vontikoppal Circle, Mathrumandali Circle have a few vendors but not to their maximum.

Some vendors say that the coconut farm owners are bargaining for higher prices. “The demand is more from every region and as such, the farm owners are drifting away to areas where they can make profit. If we want to build stocks, we too must be ready to cough up more money. But if we pay more, naturally we have to pass it on to customers and they refuse to pay more,” Rangaswamy, a vendor, told Star of Mysore.

While Maddur and Hunsur are the major suppliers of tender coconuts to Bengaluru, now the nuts are taken from Mysuru belt also and added to the problem is that coconut trees are drying up and dying, drastically cutting production. Mysuru district has 23,000 hectares of coconut farms but there is no dedicated market for either tender coconut or the fully grown nut.

Though there is enough demand for tender coconuts from everywhere, there are many reasons for the lack of supply to the demand. Chiefly, because of the lack of water, the yields have dropped. The coconut trees are being affected by a variety of diseases because of which they are dying off.

Almost 100 to 150 tender coconuts are sold by Dheeraj near Maharaja’s College Grounds. Sometimes, these numbers may rise or fall. But on most days, there is a good sale.

“But now the supply is not enough. The profit margin has decreased as I pay Rs. 24 per nut and the farms sell them at Rs. 18. Other expenses include plucking the nuts from the tree and I have to pay Rs. 2 per nut and transportation cost to Mysuru is Rs. 2 per nut. I have to sell it at Rs. 30 and even if I increase it by Rs. 5, people go away frowning,” he said.

Vendor Thimmanna at Ballal Circle said that there are a few wholesale merchants who take trucks and pluckers to homes of estate owners and they offer Rs. 5 more than what the Rs. 18 we offer per nut. “Owners prefer such deals as there is no risk for them and even the wholesale merchants make a profit by selling the same for Rs. 30. If we buy from them, we have to sell it at Rs. 35 or Rs. 40. But who will buy it for Rs. 40,” he asked.

A tender coconut market will be established at APMC premises in Bandipalya soon and a decision has already been taken in this regard, said APMC member Anand. The dedicated market will help the growers get their produce to the yard so that they can directly sell to the vendors.

The building and 2-acre land that had been handed over to APMC State Unit in Bandipalya premises have been withdrawn and the same land will be used to set up a tender coconut market, he added.