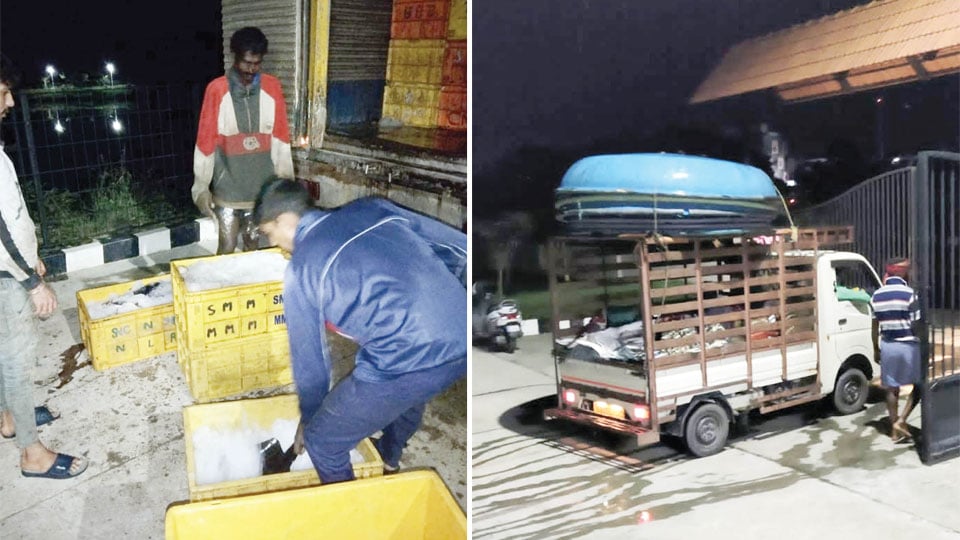 Over fishing depriving migratory birds of food; Fishing tender handed over for a paltry Rs. 1,450 per year; Residents demand its scrapping

Mysore/Mysuru: The State Government’s move to hand over the rejuvenated Hebbal Lake for rampant fishing activities has upset the residents, morning walkers and environmental activists.

The Zilla Panchayat Department of Fisheries has already awarded the fishing tender to another fishing co-operative body for a paltry Rs. 1,450 per year and fish is being caught from the Lake on a day-to-day basis. The caught fishes are being transported in vehicles that come to the Lake campus after dark.

The 54-acre Hebbal Lake was recently given a new lease of life by the Infosys Foundation that spent a whopping Rs. 105 crore. As part of the Corporate Social Responsibility (CSR) initiative, money was pumped in to revive, beautify and infuse fresh water into the water body after blocking polluting industrial and commercial waste-carrying channels.

The Foundation, under the Chairmanship of Sudha Murty, tied up with the Mysuru City Corporation (MCC) and incorporated various works and technologies, including the Sewage Treatment Plant, which fully recycles sewage before leaving it to the Lake.

After rejuvenation, the Infosys Foundation has been maintaining the Lake.

Now with the pristine water body being handed over to fishing, residents, morning and evening walkers are upset with the fact that hundreds of kilograms of fish is being transported from the Lake, dirtying the whole atmosphere and also robbing the migratory birds of their food.

To register their anger against the Government move, a protest was organised at the Lake this morning by Hebbal Kere Samrakshana Samithi where they demanded immediate scrapping of the fishing tender and allow the Infosys Foundation to maintain the Lake as before.

Addressing the crowd, M.R. Ravikumar of the Samithi said that the Infosys Foundation had given new life to a once dead lake. “Sudha Murty has spent Rs. 105 crore to rejuvenate the Lake and has set up a water treatment plant and also fenced the surroundings to prevent encroachments. After life was breathed into the Lake, thousands of migratory birds come here in all seasons and roost. If fishes are caught on a large scale, there will be no food for the birds,” he said.

MCDCC Bank President G.D. Harish Gowda, who is the son of Chamundeshwari MLA G.T. Devegowda visited the protest site and assured that the Lake will be maintained by the Infosys Foundation as before and all efforts will be undertaken to protect the Lake from pollution and large-scale fishing.

“The Government’s attention will be drawn to the issue and the Lake will be protected. I will speak to my father on the issue,” he said.