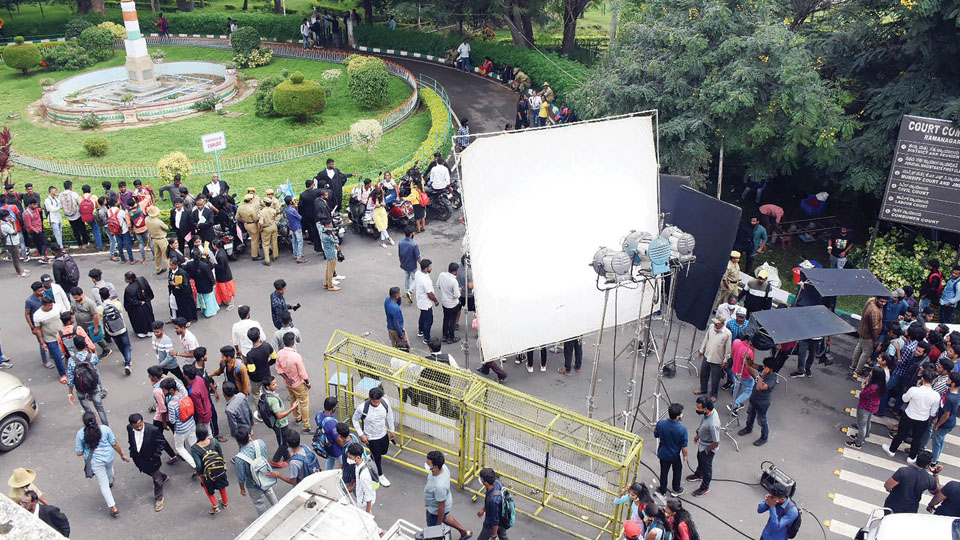 Mysore/Mysuru: The Maharaja’s Degree College in the heart of the city turned into ‘District and Sessions Court, Ramanagara’ today with lots of advocates dressed in their black attire and also litigants mobbing them to represent their cases in the ‘Court’.

Reason: A Malayalam movie shooting was taking place inside the campus and two sections of the College were given a complete makeover to make the heritage building look like a Court, complete with display boards, lawyers, judges and litigants. The movie, Jana Gana Mana was being shot there since Sunday last and yesterday and today being working days, students were pulled  towards the shooting.

Lights and camera trolleys were set up as part of the shooting and the film crew had engaged private security guards for crowd control. While one shooting session was held in the morning as the classes began at 9 am, the other sessions would be held later in the day when the classes end.

The shooting was being held at the College in two sections — opposite the Journalism Department near the main building and Centenary Hall and near Junior BA Hall near the Grounds. Usually, the University of Mysore gives permission for such shoots to rake in revenue as Maharaja’s Degree College is one of its constituent colleges.

But students and teachers have objected to the University’s move to allow film shooting during academic hours. Teachers and students, on condition of anonymity, said that they have no problem if the University allows shooting during holidays and Sundays. “Classes have just begun and students are adjusting to the physical classes after months of COVID lockdown and allowing a shoot during class hours is not acceptable,” a lecturer said.

While the College Principal refused to comment saying that the issue is beyond the College’s control, students said that their parents had written to the University many times asking it to desist from letting out the campus for shooting during academic hours. University charges money for shooting and puts the risk on the shooting crew. The crew has to ensure that peace is maintained and the classes are not disturbed. The heritage building is a preferred shooting destination for Kannada, Tamil, Telugu and Malayalam movies for the scenes of college, court and Govt. offices.

When University Registrar Prof. R. Shivappa’s reaction was sought, he clarified to SOM that the shooting did not disturb classes. “See, these students are mature and they are not small children. Moreover, we have mentioned in the conditions that shooting must not be held during classes and loudspeakers must not be used,” he said.

“The campuses are handed over to film crew irrespective of language. We cannot discriminate and all conditions are laid down before granting permission. Even Puneeth Rajkumar’s ‘Yuva Rathna’ was shot for weeks here,” he added.