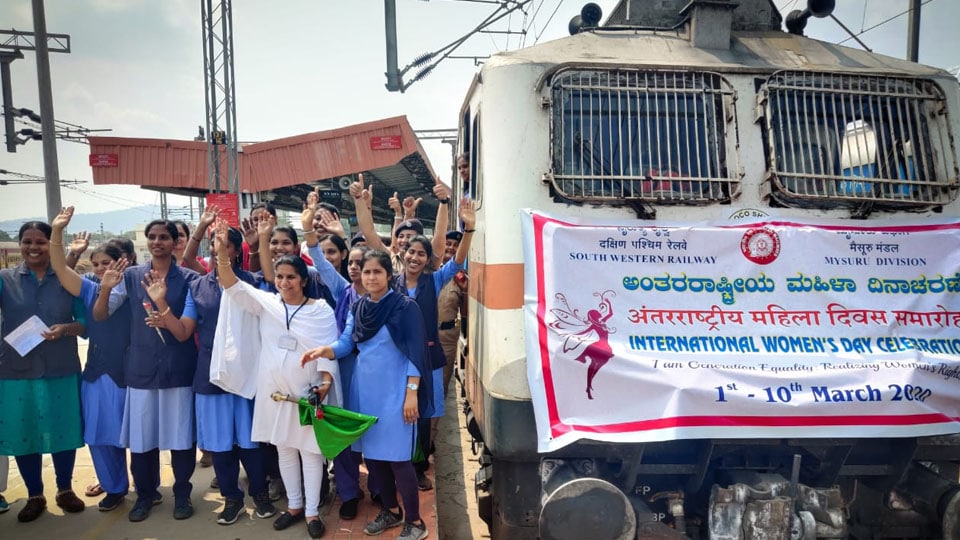 Mysuru/Mysore: Marking International Women’s Day to be held on Mar. 8, the country’s largest employer, the Indian Railways, as a tribute to women, ran the Tipu Express train between Bengaluru and Mysuru and back to Mysuru with all-women staff this morning. The crew included Loco Pilot Bala Sivaparvathi and Assistant Loco Pilot (ALP) Rangoli Patel, Guards, Railway Protection Force (RPF) personnel and safety-check team.

The Mysuru Division of South Western Railway, as part of Women’s Day, with the theme ‘Equal for All,’ is celebrating the event from Mar. 1 and the event will conclude on Mar. 10.

The Mysore Railway Station was brimming with happy faces of women passengers who were elated to travel today with this all-women crew. Some of them, including Railway staff, even clicked selfies with the loco pilots. The train also carried a banner representing ‘International Women’s Day.’

The train’s Loco Pilot Sivaparvathi, who has eight-and-a-half years of experience in steering trains, speaking to SOM, said, “It is a proud moment for me to be steering this train today along with my Loco Pilot Rangoli and the all-women staff.”

Rangoli Patel is just six months into the Railway job. The 22-year-old is from Bandar district in Uttar Pradesh and she joined Railways in August 2019.

The technician team which is responsible for the safety-check of the train as it leaves the platform and starts its journey towards its next destination, was led by Ramya, a senior technician along with five other women crew members and Point-woman P. Pushpa.

Aparna Garg, speaking to SOM, said, “The theme ‘Equal for All’ is an effort of the Railways to promote more women workforce and empower them. Women of today are no less to any men, be it in any field. I hope through such initiatives, more number of women are motivated to take up jobs in their respective fields of interest.”

2 COMMENTS ON THIS POST To “Ahead of International Women’s Day: All-women crew steers Mysuru-Bengaluru train”