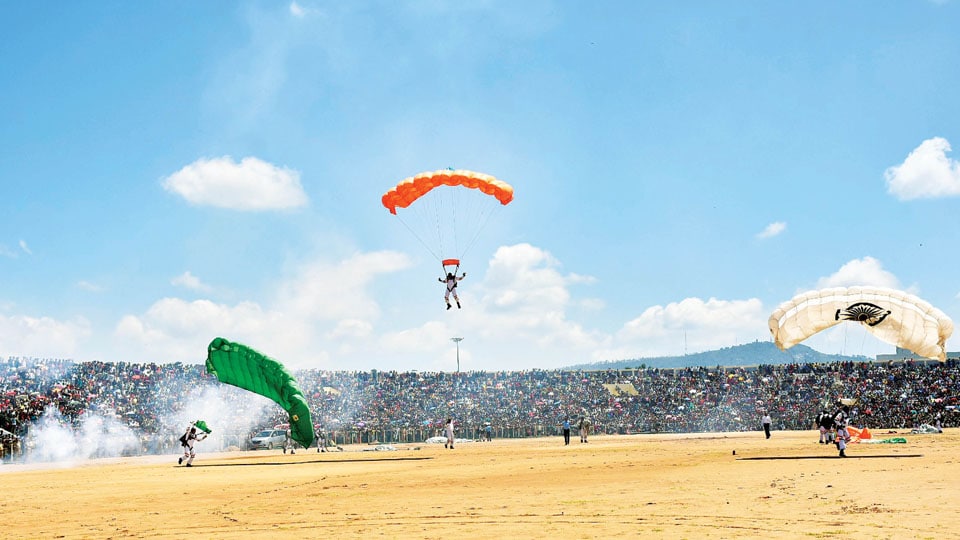 Mysuru:  A special air display by an Indian Air Force (IAF) team captivated the crowd at Bannimantap Torchlight Parade Grounds this morning. It was a clear sky though it rained last evening and the 35,000-strong crowd cheered the IAF teams as they performed breath-taking manoeuvres in the air and on the ground.

The crowd had gathered as early as 9.30 am and due to technical glitches, the show began at 12.20 pm. The performance was for one hour and first it was the MI-17 Helicopter dropping millions of flower petals on the cheering crowd. The chopper was steered by Wing Commander Baliga and Srikumar. The other feats included slithering operation and sky diving.

The show began late as the MI-17 Helicopter that was on its way to Mysuru from the Air Force Station, Yelahanka in Bengaluru developed a technical snag and force-landed at Arakere Police Station limits in Mandya. The Chopper, however, landed safely due to the presence of mind and manoeuvring by Wing Commander Baliga. After some time, the helicopter took off to Mysuru and showered flowers on the crowd.

The slithering operation was performed by a MI 17 Chopper with 8 Dare Devil troops on board. Ropes were drawn from the chopper and the men slithered from them from a height of 50 to 80 feet, much to the excitement of the onlookers.

The MI-17 helicopter, other than its para-drop role, is extensively used in casualty evacuation, flood relief, combat, counter insurgency, watch and rescue. National Anthem was played and slogans like ‘Bharat Mataki Jai’ were chanted aloud.

The last display was of Akasha Ganga where paratroopers jumped from the MI Chopper. The cheering crowd closely followed the chopper and saw the jumpers actually fall towards the earth before they opened their parachutes. As they dropped to the ground, two jumpers displayed a ‘V Shape’ that looked like an Indian flag. Next was three jumpers forming the Tricolour with Orange, White and Green colours. While the Akash Ganga team took off from the Mysore Airport at Mandakalli, the Dare Devil team flew from Air Force Station at Yelahanka.

Paratroopers and other IAF personnel later mingled with the crowd and even posed for selfies. Young men and women were asked by the Defence personnel to join the Forces for a fruitful career. They cheered as IAF pilots manoeuvred skilfully in the sky, sought details on aircraft from the uniformed men and expressed their hopes of donning the IAF’s wings someday. After the scintillating air show, the Fire Service personnel displayed a fire extinguishing performance.

2 COMMENTS ON THIS POST To “Air Show captivates crowd”