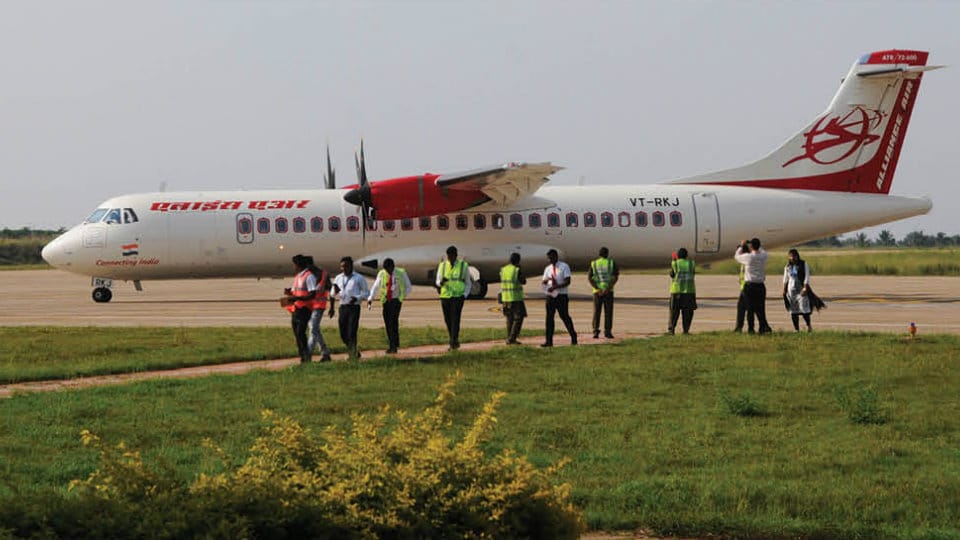 Mysuru: The Mysore Airport expansion plan has hit a fresh roadblock with farmers refusing to part with the land and demanding a higher compensation. The District Administration needs around 300 acres of land near Mandakalli on Mysuru-Nanjangud Highway for acquisition to expand the Mysore Airport for facilitating international flights.

The Centre has already cleared the proposal to construct a runway above the Mysuru-Nanjangud Highway and has earmarked Rs.700 crore for the first phase of work. At present, the Airport at Mandakalli has a single runway of 5,700 feet in length which is only suitable for ATR planes providing short-haul flight operations.

The existing airport is spread over 490 acres and under the expansion project, the length of the runway will be increased to 7,900 feet and 45 metres width that allows jet aircraft such as Boeing 737 and Airbus A320 to land at Mysore Airport.

At a meeting held between farmers, land owners and the District Administration at Agricultural Marketing Training College on Hunsur Road on Saturday farmers demanded more compensation. As such, the meeting, chaired by Deputy Commissioner Abhiram G. Sankar failed to come to any consensus.

In the earlier two meetings held on the same issue, the farmers had demanded a compensation of Rs. 2 crore per acre and the report regarding this was sent to the State Government. But as per the Karnataka Industrial Area Development Board (KIADB) Act, Rs. 2 crore cannot be provided per acre and as such, the State Government had returned the proposal to the District Administration.

Speaking to Star of Mysore, President of Hasiru Sene Badagalapura Nagendra said that when the Nanjangud-Mysuru State Highway was upgraded to National Highway, the National Highways Authority of India (NHAI) had paid a compensation of Rs. 2.5 crore per acre.

He alleged that the District Administration was adopting a discrimination policy as the land for the Airport expansion too is commercial in nature and the farmers deserved similar compensation as was paid by the NHAI. He said that when the NHAI itself paid Rs. 2.5 crore, the KIADB too can pay the same amount to the farmers who are set to permanently lose their land.

Commenting on the outcome of the meeting, DC Abhiram Sankar said that while the KIADB proposed Rs. 1.50 crore, farmers were demanding Rs. 1.80 crore. “We will send the report to the Government and the final decision on the compensation will be taken by the Government,” he said.

The expansion of the Airport is dependent on extending the runway which in turn depends on the 400-metre to 600-metre-long underpass that will be built on Mysuru-Nanjangud Highway. This is because the alignment of the runway and the Highway bisect each other. The underpass idea was mooted as the road diversion was an expensive proposition. Once the underpass is constructed, the Highway will pass below the extended runway.

The underpass will be constructed by the National Highways Authority of India and the project cost of Rs. 700 crore has also been factored in the cost of the underpass. The Bureau of Civil Aviation Security (BCAS) has already given the security clearance for the underpass.