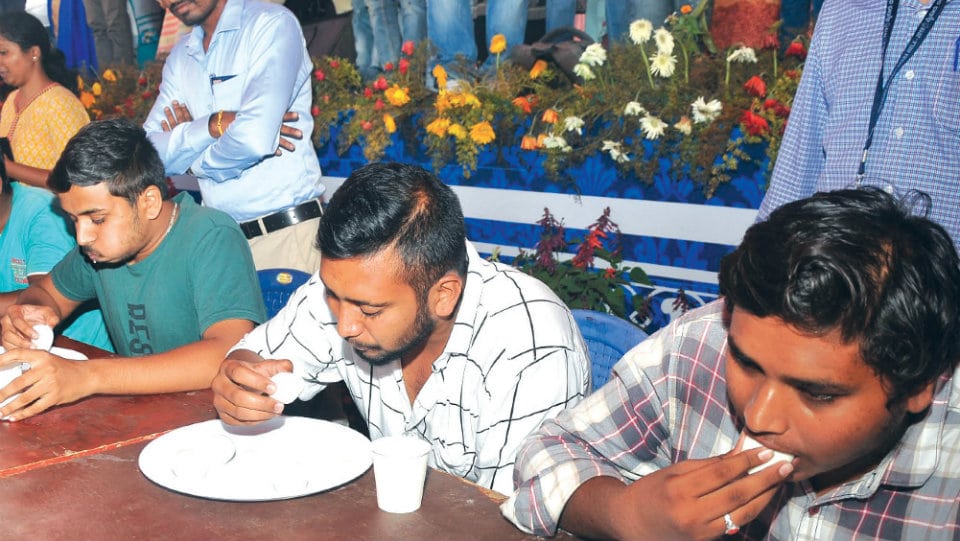 Mysuru:  The 1967 film ‘Cool Hand Luke’ tells the story of a man (played by Paul Newman) in prison for vandalism who refuses to be a cog in the wheel of the system. Inside the prison, he earns respect by demonstrating abilities of leadership and endurance. One of the feats of endurance is his task of eating 50 hard-boiled eggs within an hour.

Would it be possible for a man to really eat 50 eggs in less than an hour? Yes. Going by the record created at yesterday’s boiled egg competition organised as part of Dasara Aahara Mela where a man ate 6 eggs in just 60 seconds, it is quite possible to eat 50 eggs in one hour. Of course, you have to possess that appetite to digest 50 eggs in one go and bear its effects on your stomach and digestive systems. And more importantly, you must not choke.

The Aahara Mela egg eating competition was organised at Scouts and Guides Grounds and Kaushik of Srirangapatna, with quite ease, ate 6 eggs in just 30 seconds. Audience cheered as he ate the eggs one by one and bagged the first prize. The hard-boiled eggs were peeled and kept ready for the competitors to eat and a glass of water was placed before them.

The second prize was bagged by Prajwal of Chamarajanagar while Manjunath from Hunsur stood third. Interestingly, all the three participants ate 6 eggs each and Kaushik was the fastest among them.

Later speaking to reporters, said that he has been participating in different Dasara competitions since 2016. “I have participated in cooking competitions held for men and have won the second place,” he said.