Home » News » All Indians are one people with one DNA 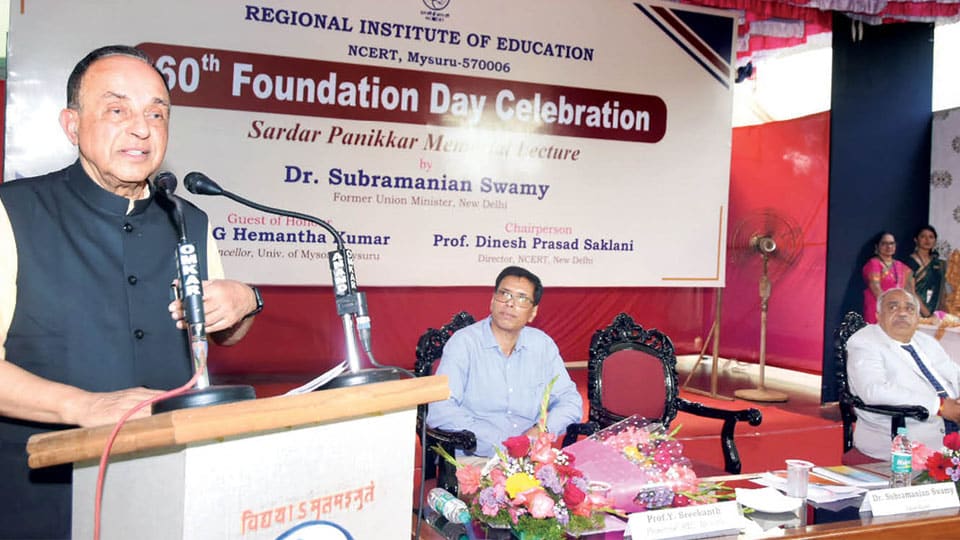 All Indians are one people with one DNA

The Sardar Panikkar Memorial lecture series was introduced in 1964 in memory of the valuable services rendered by late Panikkar for the development of education in India. As the Vice-Chancellor of the University of Mysore, he evinced a deep interest in the development of RIE.

Delivering the lecture to a packed audience, Dr. Swamy said that it was Sardar Panikkar who first saw India as a continuing civilisation. “The British taught us that Indians came from elsewhere. It was Sardar Panikkar who demolished this deeply ingrained British propaganda. Unfortunately today, Panikkar’s work on Indian history does not figure in any history syllabus,” he said.

“Indians had an influence on Chinese too. 1,500 years ago in China, there lived an emperor named Wu. He was a great patron of Buddhism and it was Bodhidharma — who was born a prince in Pallava Kingdom Tamil Nadu — who went to China as a monk to spread Buddhism. At the age of 22, Bodhidharma was fully enlightened, and that was when he was sent as a messenger to China. He started physical training of the monks of Shaolin Monastery which led to the creation of Shaolin kungfu. Even now it is there,” he recalled.

“We Indians need to refocus on our people. At present, we are reading the history written by the British and are taught by people who were tutored by the British and they are just teaching us what the British wanted us to know. According to the British, we were a scattered society and it was the British who united us. This is false. I am glad that the NCERT (National Council of Educational Research and Training) is doing great work in rewriting history,” Dr. Swamy added.

He explained how caste, a colonial tool of divide and rule, is wholly distinct to but often conflated with the Indian system of Varna. All Indians are one and this has been proved by the research conducted by the University of Mysore (UoM) and the Centre for Cellular and Molecular Biology (CCMB) in Hyderabad, he said.

“It has been established through genomic analyses that people in North India were no different from those in the South and that all shared the same genetic lineage. It also established that people of the North and South were part of the same culture. It has been proved that there is no difference between the people and castes and it is impossible to make a distinction between them,” he said.

“You should understand that whoever lives in this country is Hindu, or his forefathers were Hindus. All those residing in this country are Hindus, which I can prove through a DNA test. Even the DNA of Muslims and Christians are like ours (Hindus’). They are all products of the same soil and should accept that they have not come from outside,” Dr. Swamy said.

Sanskrit is a uniter in India

Dwelling on the Varna system, Dr. Swamy, a seasoned economist, said that hereditary castes did not exist in the Vedic times but children were placed in different varnas according to their qualities and also according to what they chose to do. “Caste is a temporary factor and Varna is not God-given. Unfortunately, in India, Varna is creating a divide,” he said.

“The history that Britishers have written should be changed so that truth could come out. We should all learn a language that binds all languages. That is Sanskrit. In USA, they have started learning Sanskrit. But if you talk about Sanskrit in our country, you will be branded communal, fringe element,” he said.

“Sanskrit is a uniter in India and it is a reviving language. It is the mother of all languages.  It will also help unite the Hindus and create a spirit of oneness in them. Research in the West (especially by the National Aeronautics and Space Administration – NASA) focuses on Sanskrit among the pool of many human languages, explaining that it is one of the most suitable ones for computing techniques. The grammar also makes Sanskrit suitable for machine learning and even artificial intelligence,” Dr. Swamy said.

Dr. Swamy on humanism and materialism

“While the West is fully materialistic, Indians in the past maintained an outlook based on humanism. Now we are making the mistake of investing in materialism where we weigh each other in terms of material wealth and completely ignore humanism. We need to have a balance between spiritualism and materialism. They must be synchronised,” he explained.

Dr. Swamy stressed that the task of uniting Indians should be taken up and the mindset that all of us are Indians should get deep-rooted. “Many in the West are seeing Hinduism as the best religion as it is not rigid like other religions. Hinduism does not treat other faiths with animosity,” he added.