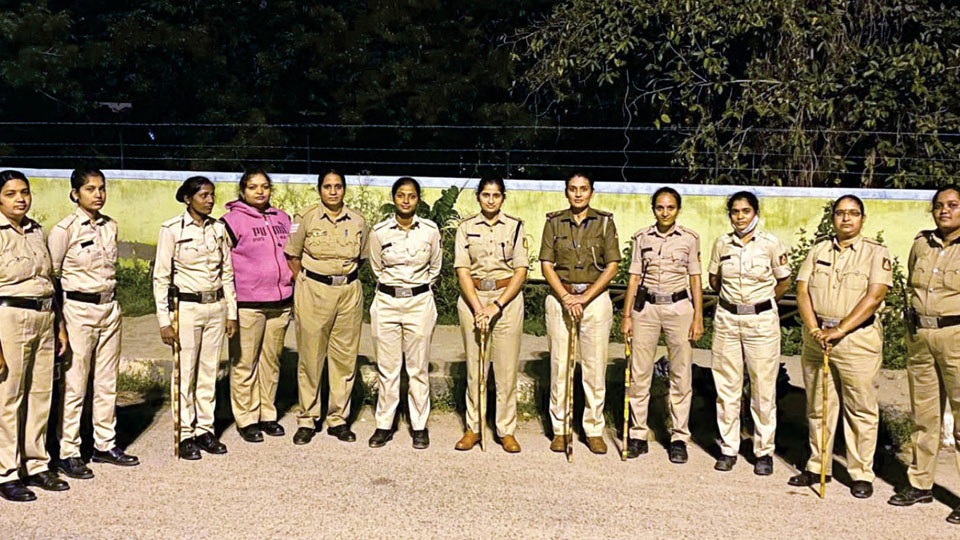 Mysore/Mysuru: As part of the on-going National Integration Week and to instil confidence among women Police personnel in performing night duty on streets as their male counterparts have been doing since years, the Mysuru District Police conducted a unique experiment of putting only women Police force on after-dark duty last night in Nanjangud Sub-Division.

Over 30 Police Constables led by four lady Sub-Inspectors and supervised by probationary Dy.SP Nikhita efficiently performed the night-long duty and returned to their offices this morning. The duty included beat policing, keeping an eye on the accused who are out on bail for heinous crimes, checking vehicles moving to and fro Nanjangud, monitoring suspiciously moving vehicles and also registering their presence in e-beat system (thumb impression).

The all-women night beat was assigned to the Nanjangud Sub-Division comprising Nanjangud, T. Narasipur, Bannur, Nanjangud Rural and Varuna as per the directions of Superintendent of Police R. Chethan and was monitored by Additional SP R. Shivakumar. Even women home guards were part of the operation. Only the drivers of vehicles were men and all other duties were handled by the women force.

For years, women Police from the ranks of a Constable to officers have been working in day shifts. Compared to the industries or any other private employment, policing is a totally different job as there are no fixed working hours involved and often Police personnel have to work beyond the shift timings depending on the situation, said a Police officer.

This is probably for the first time in Karnataka such an initiative has been taken in Mysuru and the women’s team have performed well. All through the night and in the wee hours, all vehicles entering and exiting Nanjangud including heavy vehicles were checked for documentation and purpose of visit. Even the drivers licences were checked, the officer said.

These women have proved that there are no issues working in night shifts, as it is a part and parcel of the duty being a part of the Police force. “Like men, the women Police were posted on night patrolling, naka bandis and also as duty officers,” he added.