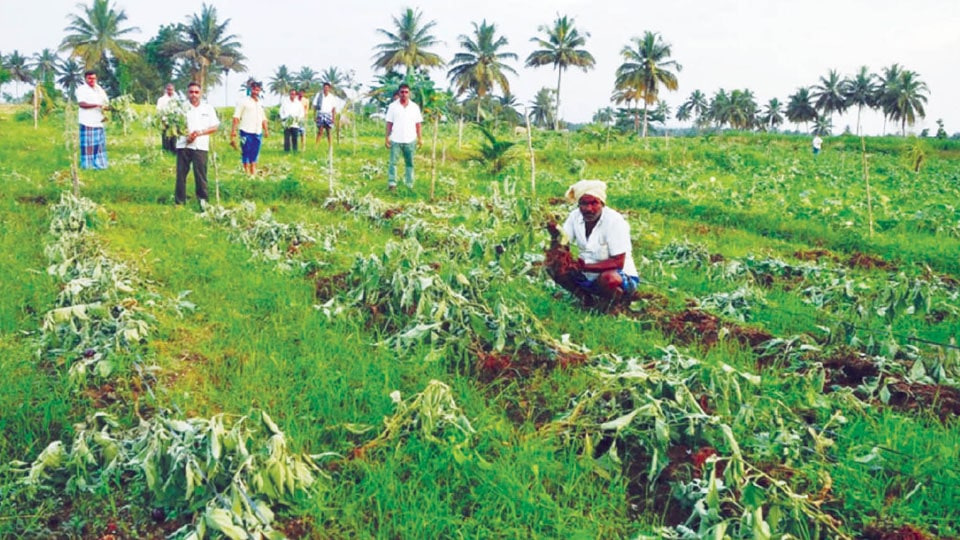 Pandavapura/Bannur: While continuous rains have damaged cauliflower crops in Bannur, miscreants have destroyed brinjal crops at Pandavapura, causing huge loss to the growers.

Farmer A.J. Chandrashekar had grown round brinjal in his land at Aralakuppe village in the taluk and the crop was destroyed by miscreants on Sunday night.

Chandrashekar had grown brinjals in 1.5 acre land at Hosakoppal Survey No. 22 and despite rains, he had received good yield. He was to harvest brinjals on Monday but on Sunday night miscreants destroyed all the plants and the brinjal yield.

Chandrashekar and his brother Dayashankar had grown round brinjals after taking crop loan as round brinjal had good demand in the market. Now, they have suffered a loss of more than Rs. 5 lakh.

Village elders, who inspected the damaged crops, have expressed anger on the miscreants. Urging the authorities concerned to provide compensation, they also demanded Police to trace the culprits. A case has been registered at Srirangapatna Rural Police Station.

Shivananjegowda, a farmer, had grown cauliflower in his 35 gunta land at Madigahalli village near Bannur. He is said to have taken Rs. 60,000 loan to grow cauliflower, which is now completely damaged due to incessant rains. Shivananjegowda has urged the authorities concerned to provide compensation for the crop loss.