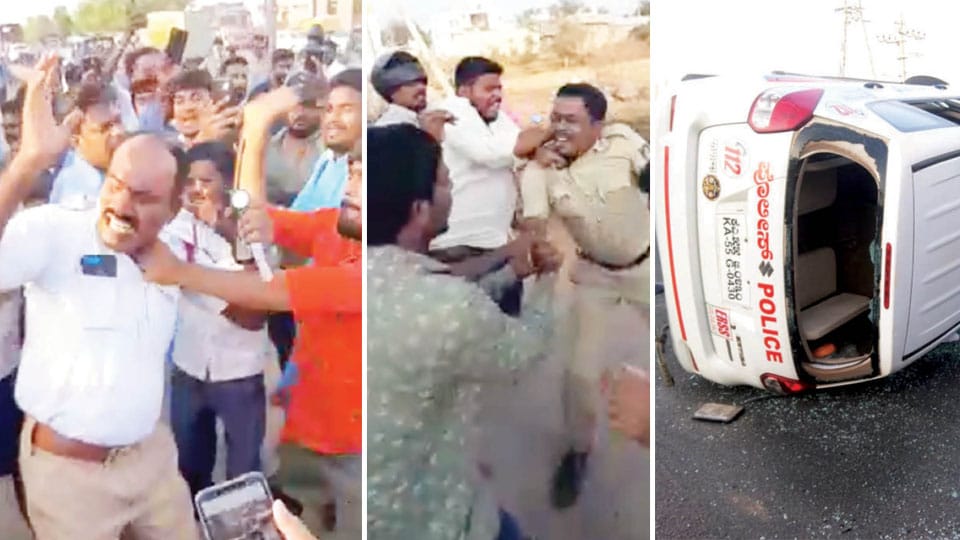 Mysore/Mysuru:  A two-wheeler rider was killed on the spot and the pillion rider sustained injuries when a tipper vehicle hit the bike from behind and ran over the rider when the latter allegedly attempted to escape from Police checking.

The accident took place yesterday evening on the Ring Road, near RMP Quarters, between Hinkal and Bogadi and the public, angered over the incident, have assaulted four Police personnel including an Assistant Sub-Inspector (ASI) besides damaging the Police vehicle (KA-55-G-0430).

While the deceased has been identified as Devaraju (42), a Civil Contractor, native of K. Kannenahalli in H.D. Kote taluk and was presently residing at Bogadi along with his wife and two sons, the injured pillion rider is Suresh, who is undergoing treatment at a private hospital in city.

Details: Yesterday evening, Devaraju and Suresh were proceeding on the Ring Road from Bogadi towards Hinkal. Devaraju, who observed Traffic Police conducting checking of vehicles at a distance, allegedly took a turn suddenly to escape from being caught by the Police. But a Police Constable, who was hiding nearby, reportedly tried to catch Devaraju from escaping.

Shocked on seeing a Cop rushing towards him, Devaraju, lost control of the bike and fell on the road and the tipper vehicle, which was proceeding towards Hinkal, ran over Devaraju killing him on the spot and pillion rider Suresh sustained injuries.

Public alleged that as the Police Constable who was hiding nearby hit the riders, they fell on the road and the tipper vehicle ran over one of the riders.

Irked public assault Cops, damage Police vehicle: As soon as the news that a rider was killed when Traffic Police were conducting checking spread, hundreds of people, who assembled at the spot, took the Police personnel to task. Though the Cops tried to convince them that they had nothing to do with the accident, the public said that the Traffic Police think motorists as thieves and they hide in road corners to target unsuspecting motorists, which was resulting in such accidents.

The public, angered over the incident, chased a Traffic ASI and a staff and assaulted them. The two Cops somehow managed to escape from the public and ran away. Not satisfied, the public threw a metal barricade on the ‘Garuda’ vehicle, broke the wind shield and window glasses and toppled it. The public also assaulted three more Policemen, who were conducting checking.

As hundreds of people had gathered at the accident spot, traffic was disrupted and tension prevailed for some time. Vijayanagar Police, who rushed to the spot, managed to disperse the large crowd and brought the situation under control.

Do not play ‘Thief & Police’ game with motorists: Expressing their anger over the death of a motorist, the public have urged the Traffic Police to stop playing ‘Thief & Police’ game with motorists. They said that Traffic Police have a strange way of conducting checking of vehicles. Instead of creating awareness on following traffic rules and conduct checking in a scientific way, they indulge in checking on busy roads, near markets, prominent circles and on roads with dense traffic. To catch motorists avoiding checking, a Cop is made to hide at a distance to catch those taking a turn and going back and the motorists on seeing a Cop suddenly rushing towards them while going back, lose control over their vehicle (two-wheeler) and fall on the road sustaining injuries some time a vehicle, which is coming from behind runs over the fallen rider, killing him or her.

The public said that the Traffic Police have installed CCTV cameras on prominent roads and junctions under M-TRAC Project and there are Interceptor vehicles stationed at vantage points to check speeding vehicles. There is a scientific way to book traffic rules offenders. Police send notices to traffic rules offenders based on CCTV footages and photos clicked by Interceptor vehicles and fines are being collected. The Traffic Police are also checking parked vehicles using their hand-held device, check for previous cases, lock the wheel of the vehicle and collect fines when vehicle owners come to take their vehicles.

Though there are various scientific ways to collect fines, the Traffic Police play ‘Thief & Police’ game with motorists, stop unsuspecting drivers and riders by hiding near street corners and impose fines, which is unscientific, the public said.

This unscientific way of conducting checking is not only a problem to motorists but also to the Police as there are instances of a few motorists ramming vehicles into Policemen and pushing them when they suddenly appear in front of the vehicle to stop them. This has also resulted in loss of lives and many families have come to the street after losing the family’s lone bread-winner. To prevent such incidents from happening, Home Minister Basavaraj Bommai has issued instructions not to conduct checking by stopping vehicles, but still such an incident took place in Mysuru and a motorist has lost his life.

Traffic Police did not stop us: Pillion rider

Meanwhile, a video of Suresh, the pillion rider, explaining about the incident has stated that there was no connection between the Police and the incident. He has stated, “We both are contractors. As there was no car, we had gone to the city on Devaraju’s bike and were returning back after completing the work. On the way, I told Devaraju, that I had left my car for repairs at a garage on Bogadi Road and I will go home after visiting the garage.”

Suresh has further said, Devaraju told him that he would drop him and go to meet an auditor on Hootagalli Main Road. “We both left on the bike and we saw Traffic Police conducting checking on the Ring Road. As we both were wearing helmets and had all documents, we were proceeding towards our destination. When the Traffic Police were checking at about 250 mts distance, a tipper hit the bike from behind and I was rendered unconscious. When I regained conscious, I asked about my friend and the Police told me that he has been taken to a hospital and they then took me to a hospital. It is false that the Traffic Police stopped us,” Suresh said.

After observing Traffic Police conducting vehicle checking from a distance, the rider took a U-turn all of a sudden which resulted in the accident. The Police staff did not even attempt to catch them. The Police went to the spot only after the accident, but the public, assuming that Traffic Police were responsible for the accident, assaulted Police personnel and damaged ‘Garuda’ vehicle. Injured Cops are being treated at a hospital and have lodged a complaint.— DCP M.S. Geetha Prasanna

5 COMMENTS ON THIS POST To “Alleged attempt to escape Police checking: Rider killed as tipper vehicle runs over”