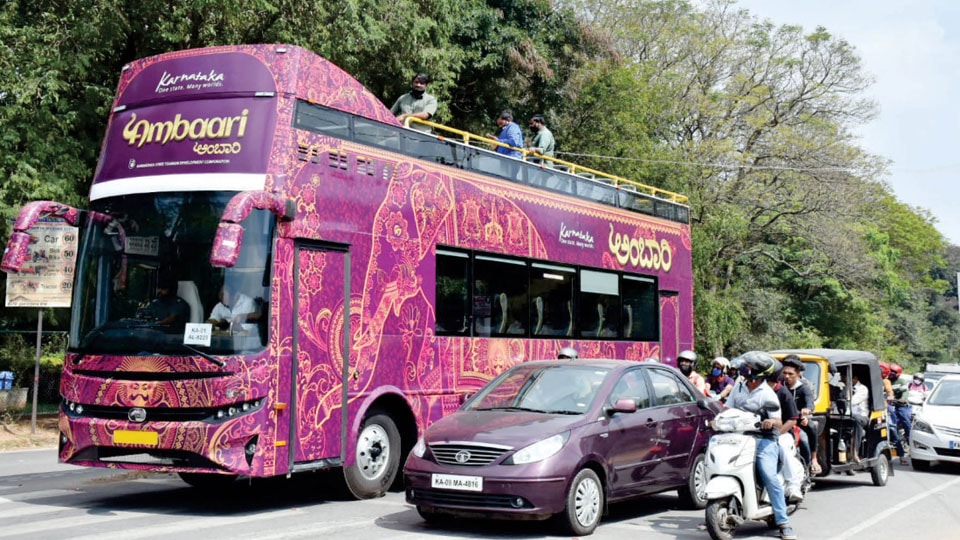 Mysore/Mysuru: The trial run or route inspection of ‘Ambaari,’ a specially-built open roof top double-decker bus to identify the potential obstacles — dangling electricity and cable wires, tree branches and LED illumination sets on procession route, electricity poles and arches — began in city this noon. This was the second route inspection of the bus.

The ‘Ambaari’ is a Hop-on and Hop-off initiative for tourists to experience the magnificent City of Palaces and other heritage and cultural structures.

Later, the bus moved towards DC Office, Crawford Hall, Manasagangothri Entrance Gate, Oriental Research Institute and Ramaswamy Circle. As the vehicle moved, the occupants on roof-top identified and noted down if there were more obstacles to be cleared.

The first route inspection was conducted on Jan. 5 where the obstructions were identified and reported to CESC that later took steps to clear the same.

CESC even issued warnings to cable companies that the cables would be disconnected if they are not removed from the route. Today’s inspection was to make sure that the route is clear or if furthermore cables have to be cleared or if trees had to be pruned.

Today’s route inspection team had the responsibility of ensuring that the bus is not in any way held up by dangling cables or wires or struck due to branch overshoots. Only after this team reports to KSTDC, the final launch date for ‘Ambaari’ ride will be finalised, said KSTDC officials.

KSTDC had procured six such buses of which four were meant for Mysuru and two for Hampi in Ballari district. The first bus came to city in March with an ambition of launching it to attract tourists. But that did not happen due to outbreak of Coronavirus.