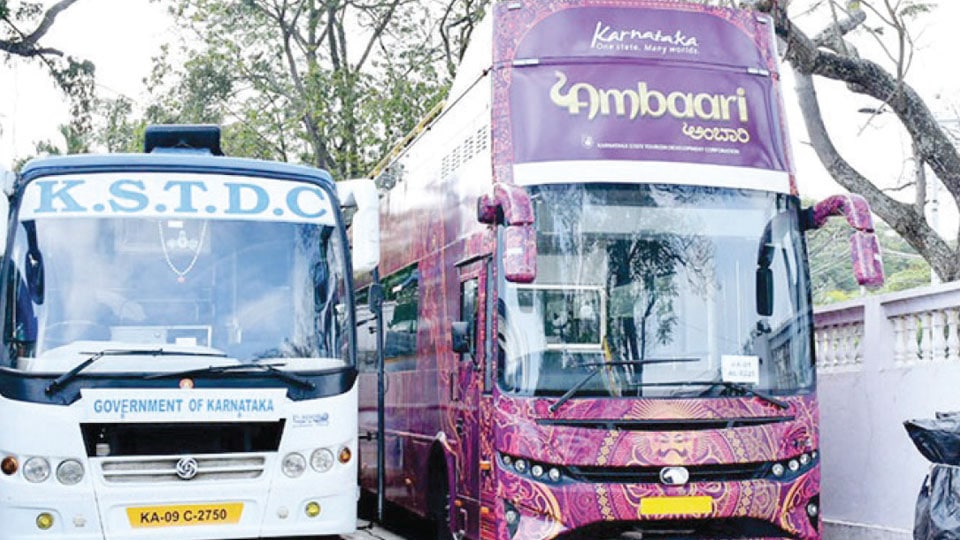 At the scheduled time today, however, the buses did not start and neither there were tourists at KSTDC Office. Moreover, not a single bus from the Bannimantap KSRTC Depot where the four buses have been parked came to the KSTDC office for the scheduled launch.

The KSTDC had publicised that the Ambaari tours would begin today and had fixed Rs. 250 per person for a two-hour ride to 35 places. Facilities were made for ticket-vending at the KSTDC office and also through the online mode. However, there was poor response from the tourists.

Sources said that the reasons for poor response might be a spike in COVID cases in Mysuru and also a lockdown has been declared in Kerala     that is reporting thousands of cases every day.

“Mysuru gets a lot of tourists from Kerala and the prevailing situation in Kerala and the restrictions in Karnataka (mandatory not less than 72-hour RT-PCR negative certificate) have made many from the neighbouring State to cancel their Mysuru visit,” sources said.

Also, there are other factors like the Chamundi Hill and Sri Chamundeshwari Temple being shut for devotees during weekends to prevent Ashada rush. In addition, the launch date of Aug. 1 was announced in a hurry before the scheduled trial runs are completed, officials said.

READ ALSO  Dasara Ambari only during Navarathri, but this Ambaari all round the year

However, the Ambaari has already completed three trial runs and linemen from Chamundeshwari Electricity Supply Corporation (CESC) have already cleared obstructions like tree branches and dangling cables. Now the authorities are planning more trial runs before deciding on the next launch date.

Speaking to Star of Mysore this morning, KSTDC Regional Manager Uday Kumar said that the KSTDC Managing Director Vijay Sharma has to take a call on the launch date of this. Sources, however, said that today being a Sunday all the Regional Transport Offices (RTO) offices are closed and as such the tour did not begin.

The project, based on the model of London’s ‘Big Bus Tours’ of taking tourists around the city in open-roof buses, is worth Rs. 5 crore and was announced for tourism destinations of Mysuru and Hampi in the 2019-2020 Budget.

Mysuru has four buses and are at present parked in KSRTC Depot at Bannimantap.