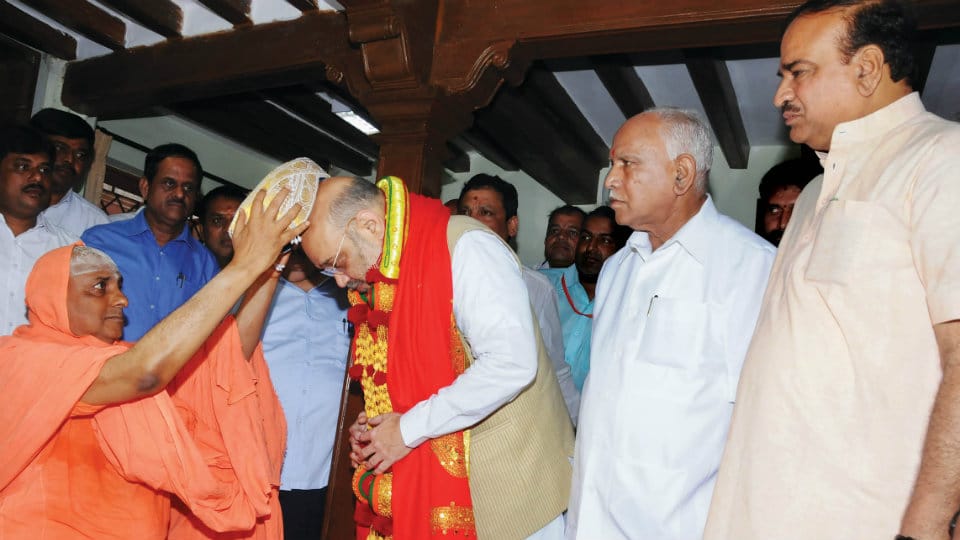 Shah, who arrived in the city yesterday night stayed at Hotel Radisson Blu Plaza near Race Course. This morning he went to Suttur Mutt at the foot of Chamundi Hill to meet the Swamiji. He was accompanied by Union Minister H.N. Ananth Kumar, BJP State President B.S. Yeddyurappa, MLA C.T. Ravi and former Minister S.A. Ramdas.

Suttur Mutt is a powerful Mutt in the region as it wields tremendous influence over the Lingayat-Veerashaiva community.

Amit Shah seeking the blessings of Suttur Seer assumes significance as the Lingayat and Veerashaiva community was reportedly upset when Congress President Rahul Gandhi did not visit the Suttur Mutt during his two-day tour programme of Old Mysuru region last week. Days before Rahul’s visit to Mysuru, party leaders in Bengaluru had announced that the Congress President would visit Suttur Mutt to meet Sri Shivarathri Deshikendra Swamiji. But his tour programme was later changed and the visit to Suttur Mutt was dropped without  any explanation. 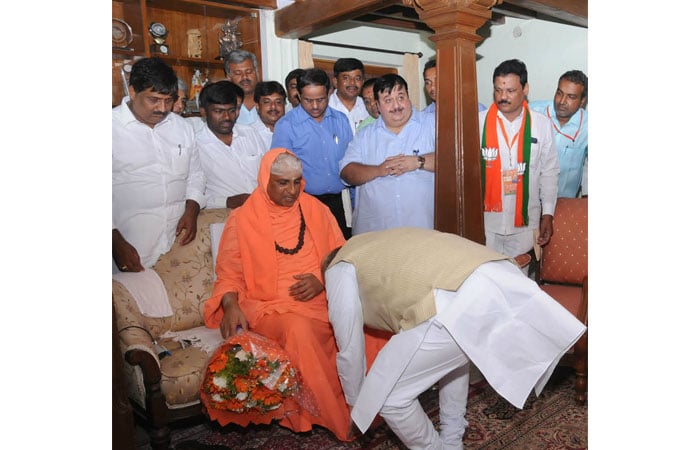 The BJP President arrived at the Suttur Mutt at 10 am and sought the blessings of Shivarathri Deshikendra Swamiji. The seer welcomed Shah and felicitated him with the traditional Mysore Peta, shawl and a memento. Shah later held a closed-door meeting with the Seer and only Ananth Kumar, Yeddyurappa were present.

Sources said that Shah told Suttur Seer that it was not a secret anymore that the next elections will be fought on the lines of caste and community. He requested the Seer’s support in consolidating votes in favour of the BJP so that the party could gather at least 150 seats.

Party sources added that Shah was impressed by the Mutt and its activities and following an invitation extended by Sutur Seer, today evening, the BJP Chief will visit the Srikshetra Suttur Gaddige at 7 pm and will meet Sri Siddeshwara Mahaswamiji of Vijayapura Sri Jnanayogashrama at Suttur.

From the Mysore Palace, Shah visited the house of late Raju’s home at Kyathamaranahalli. Raju, an RSS and BJP activist, was murdered by miscreants in March 2016. Raju’s mother Chandramma, sister Rani, brother’s wife Kumari and her children Dhanush and Damini were present. 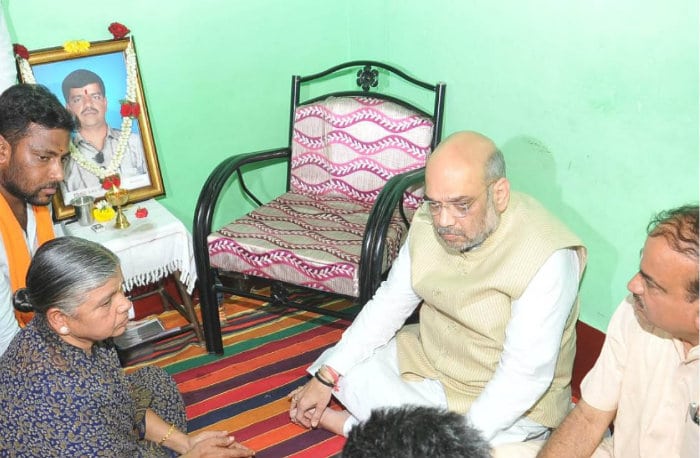 Sitting on the floor with Union Minister Ananth Kumar, Shah spent over 15 minutes at the house where Chandramma submitted a memorandum to him demanding a National Investigation Agency (NIA) probe into her husband’s death. She also demanded a government job to one member of the family. Shah assured her that if BJP comes to power in Karnataka, the culprits will be arrested and justice will be done. Shah directed BJP State President B.S. Yeddyurappa to give Rs. 5 lakh as compensation to Raju’s family from the party funds.

Former Minister S.A. Ramdas was reportedly upset as he was not invited to the closed-door meeting with Suttur Seer that was only attended by Amit Shah, H.N. Ananth Kumar and B.S. Yeddyurappa.

Party sources said that Ramdas wanted to be in the meeting but when he was not invited, he left the venue even before Amit Shah concluded his visit to Suttur Mutt. Ramdas was conspicuous by his absence at the Mysore Palace too when the BJP President called on the Mysore royal family. However, he was present when Shah visited Raju’s house at Kyathamaranahalli.

Even as Amit Shah was holding the meeting with Dalits at Rajendra Kalamandira, a few Dalit leaders wanted to know from him, his reaction to Union Minister Anant Kumar Hegde’s statement that the Constitution should be changed.

Distancing himself from the comment, Shah said the BJP had nothing to do with the statement by the Minister as it was his personal opinion. Not satisfied with the answer, the Dalit leaders shouted slogans.