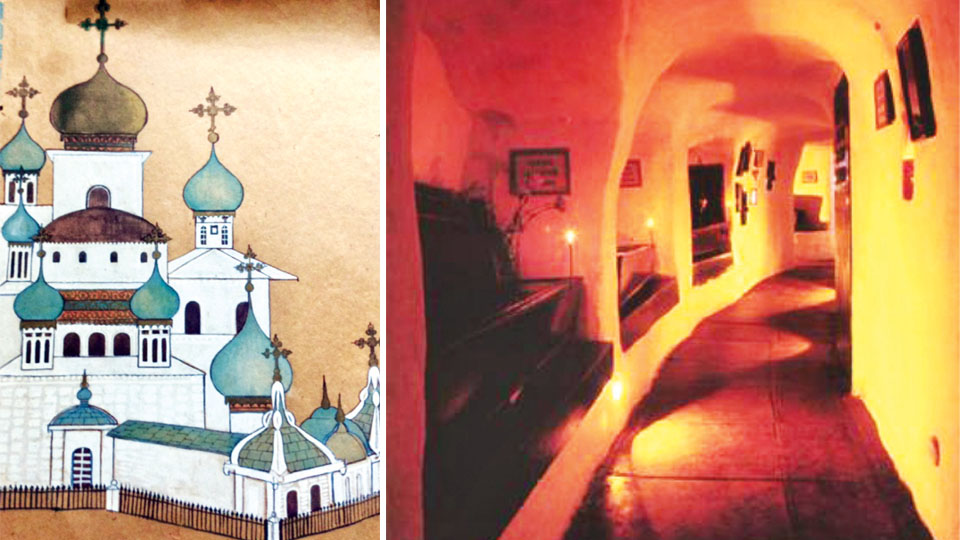 An old memory of Kyiv

A far-off memory of gold and green domes glittering atop white cathedrals, is now overshadowed by images of present day Kyiv; shattered apartment buildings, billowing smoke from missile strikes, courage in the face of devastation.

Posted to the Indian Embassy, Moscow, during the days of the erstwhile Soviet Union, my husband, A. Madhavan, and I planned a trip to the Ukraine. Our tour started with a visit to Odessa on the Black Sea. We saw the Potemkin Stairs, the symbol of Odessa city, made even more famous by the powerful, silent film “The Battleship Potemkin,” by Sergei Eisenstein in 1925, which remains a cinematic classic to this day. The fourth sequence in the film depicts the massacre of citizens who supported the rebels on the battle ship. It also features the poignant scene of a pram with a young baby in it that tumbles down the steep steps. The mother fatally shot, is unable to save her infant.

From Odessa we travelled to Kyiv. From the window of our hotel we could see  golden domes and spires above the foliage of the trees that lined the avenues. With nostalgia I recognised them as Horse chestnut trees. They grew around our home in London where we lived a few years and were called “Conker” trees by the English. With delicate white and pink blossoms, the trees are decorative but their nuts are not edible. The botanical name is Aesculus hippocastanum. Called “Kashtan” locally,  it is the symbol of Kyiv. Many were  planted in the 1830s for the visit of Tsar Nicholas 1st.

Below the ground in Pechersk Lavra is a labyrinth of loess caves and catacombs. “Pechera” means cave. This  Monastery of the Caves was established by “Theodosius” or “Antony of Kyiv” in 1051 as a centre of Eastern Orthodox Christianity. He chose to live in a cave at Berestov Mount near the Dnieper river and the monastery was founded in that area. Relics and the bodies of mummified monks have been  set into embrasures in the walls over many years. There is a list in the museum of the names of famous saints interred there. The cool and equable temperature of the loess caverns helped to keep the bodies in a remarkable state of preservation.

Kyiv has endured warfare, including pitched battles, during the Second World War when Nazi forces invaded Ukraine. The Dormition cathedral was badly damaged during the fighting and restored later. An apocryphal story tells of German soldiers exhuming the mummies in the Lavra catacombs to throw them in the Dnieper river. However, it is said they were unable to mobilise their trucks to move the mummies and abandoned the project.

Our sightseeing trip to the Catacombs began after the standard Soviet breakfast; heavy on dairy, bread with slabs of butter, Smetana [sour cream] cheese, gherkins, oily preserved fish and meats. I cannot recall eating anything that could be called typically Ukrainian. Now some Ukrainian dishes, with their recipes, are available on the internet. I also remember feeling very hungry on the Aeroflot plane back to Moscow.

A light silk sari felt comfortable on the sunny streets of the Kyiv. But as we entered the Catacombs, the chill made me draw my pallu tightly around me. The passageways were narrow and twisting, the walls retaining their original rough shapes. Niches in the wall were cleverly illuminated with spotlights on relics or skulls; which startled me initially. In larger wall openings, mummies in their shrouds, were very clearly visible under special lights through sheer glass covers. The cavern was dim in general, only exhibits being highlighted. As the tunnel turned to the right it was dark; and out of the darkness rose a dark, cowled figure, holding out its arm towards us, stopping us  in our tracks. An anonymous monk from the dim past? It was an elderly woman, a “Babushka” [grandmother] muffled against the cold in a hooded overcoat that reached to her ankles, who was wanting to check our tickets!

The antiquity of the Catacombs, the unknown monks who toiled there for hundreds of years and the force of their religious fervour, leaves an impact on visitors which was not dispelled on a return to the sunny streets of Kyiv that day; or for that matter, in sunny Yadavagiri NOW, so far away from Pechersk Lavra.