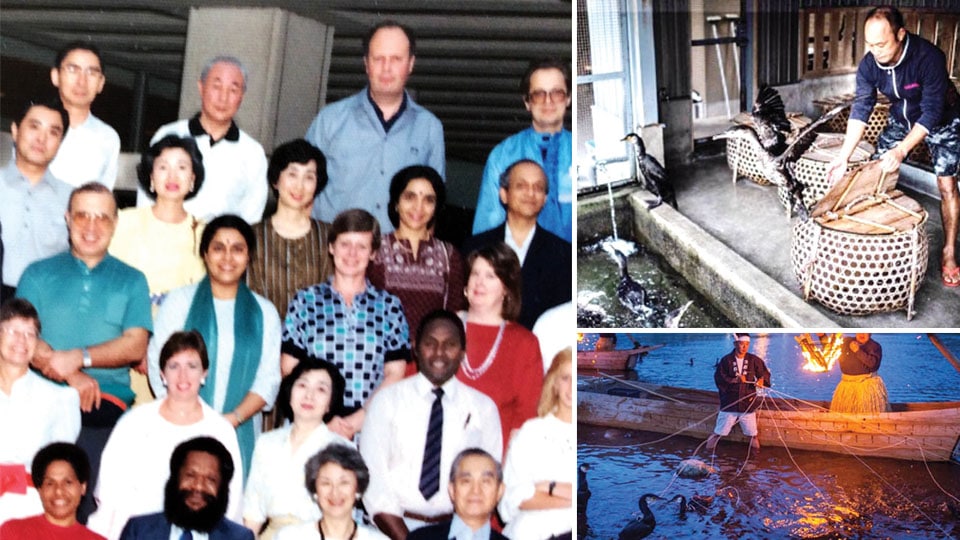 Indian diplomats enjoy a variety of cultural events when posted abroad; musical recitals, dances or ethnic programmes of the countries they are accredited to. In Japan, a different experience was to be  invited to witness an old fishing tradition in Gifu, Cormorant Fishing.

My husband, A. Madhavan and I were among a group of diplomats from Tokyo invited to the “Commemoration of Cormorant Fishing” on the Nagara River, 21st July, 1987” under the patronage of the Imperial Family. A group photograph shows about seventy of us; in the centre is the Ambassador of Papua New Guinea, a bearded, smiling man, the Dean of the Diplomatic Corps at that time.

Cormorant fishing or “Ukai” is an ancient technique practised in Japan, China and Korea, said to date back to the 7th century. Japanese Sea Cormorants called “Umiu,” are large birds belonging to the genus “Phalacrocorax capillatus.” Their sharp beaks and body build make them “the ultimate fishing machine.” In India we have several species of Cormorants. They can also be seen in Kukkarahalli Kere in Mysuru.

Japanese Cormorants are  caught young, wings clipped to prevent flight and trained for two or three years; first to accustom them to human touch, then later to catch fish which are called Ayu or “sweet fish.” They are trained by the Cormorant Master called “Usho.” The birds live in a separate hut and are hand-fed when young, creating a bond between man and bird. At nights they are kept in plaited bamboo baskets which are also used to transport them to the riverside. The Cormorant Masters will only work with the birds they have reared and the birds respond to the commands of the Masters they recognise.

On fishing trips, a cord, called “a snare”, is tied around the neck of the birds so that they cannot swallow big fish, only small ones. Upon catching large fish they are recalled to the boats by their Master and regurgitate the catch upon a cue from him. They have their own hierarchy on the boat side and will not allow other birds to sit in their place.

We made our way down to the river where the observer boats were moored. This fishing event is always held at night. Big red lanterns lighted the boats and gave them a festive air. It has long been attraction. Charlie Chaplin witnessed it twice.

Six fishing boats were poled along the river by the fishermen. They wore the old traditional garb; hats to shield them from the sparks of the lanterns, specially woven grass skirts to protect them from the icy river waters and plaited sandals. The scene was picturesque, boats flaring high and birds squawking.

Some onlookers clicked photos. The Cormorants were on long leashes, each connected to the fingers of the Usho who manipulates them like a puppeteer. The light of the flaming torches and the rhythmic tapping on the sides of the boat by the fishermen attracts shoals of the “Ayu” or sweetfish and they come up to the surface. These fish belong to the salmon family [Plecoglossus altivelis] and are found in pristine, free flowing rivers like the Nagara river in Gifu. The season is from May 11 to Oct.15, except  during the harvest moon or high water time. The first catch is given to the Imperial Family which has historically patronised these fishermen. There was much noise and excitement before the entertainment concluded with bowing and goodbyes.

Annually we received a gift basket from the Imperial household. It was work of art, gourmet savouries garnished to perfection, in the centre of which was a whole cooked fish. I never asked what kind of fish it was but now realise  that it was an Ayu. Japanese revere their Emperor and our staff were happy to share the delicacies in the basket, receiving them as we do  temple prasadam!

The spectacle of Cormorant Fishing has inspired Japanese artists and old wood block prints depict those colourful scenes. There are literary  references too.

Matsuo Basho [1644-1694]  was an acclaimed poet of the Edo period and was famous for his Haikus. After the death of his Samurai Master, he was unhappy and depressed. He then walked the perilous “Five Routes of Edo” with a “traveller’s  shade” on his head to protect him from the sun and “straw sandals” on his feet. Somewhere during his travels, he witnessed Cormorant Fishing and wrote these eloquent words in a Haiku:

“Exciting to see/ but soon after comes  sadness/ the  Cormorant boats.”

Bird and animal lovers think that this form of fishing is cruel. But, like the emotional ties that bind elephant and mahout, Cormorant and Master too share a bond; the men love the birds and care for them every day, in season and out of it. There are very few cormorant Masters left and younger generations may not be drawn to this hard profession.