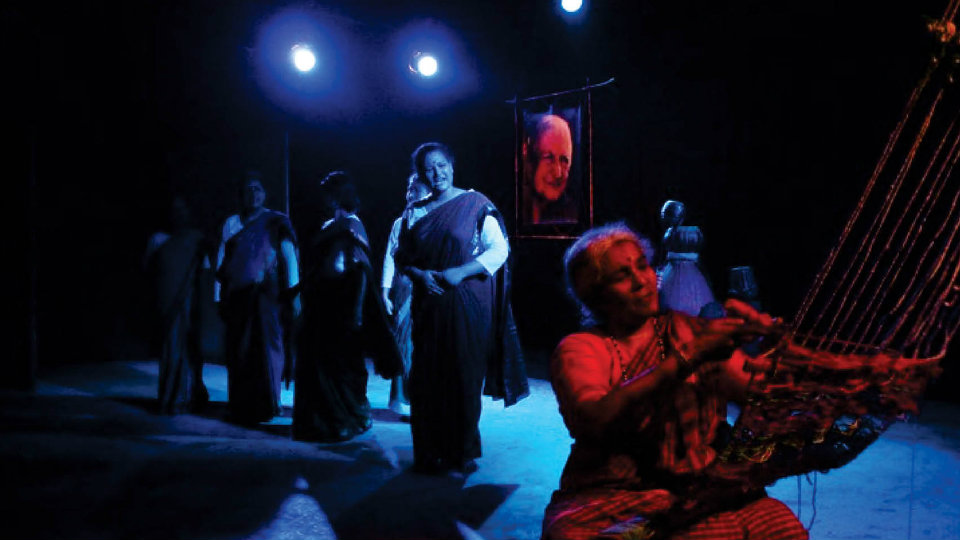 As Kamala blooms in Bhagirathi…

The Kannada play ‘Kamaladevi Chattopadhyay: Kelavu Nenapugalu’ will be presented by Seagull Theatre and Ba-Srushti at Kirurangamandira in Kalamandira premises tomorrow (Aug. 3) at 7 pm. The play, based on Kamaladevi Chattopadhyay’s autobiography, is written by Vaidehi while Design and Direction is by Rangayana Director Bhagirathi Bai Kadam. Here we publish a review of the play that was staged at Bhoomigeeta on July 1, 2018. Entry ticket is Rs. 50.—Ed

Bhagirathi Bai Kadam is a theatrical force to be reckoned with and her recent production ‘Kamaladevi Chattopadhyay: Kelavu Nenapugalu’ is an exemplar of that force. In her charismatic performance of Kamaladevi’s vibrant profile, there’s a nutritive love for life.

Kamaladevi Chattopadhyay is a multi-faceted woman — an authority on traditional knowledge, an adept artiste, a feisty freedom fighter, a voice for equality, a roar against injustice, a patron of handicrafts and a mother to theatre.

Kamaladevi’s life never glided like a river though. Fortuity struck with both pleasure and pain. So the play says: “The road is what you walk on; the goal is what you reach.” The play carries many such reflections, pensively uttered by a grey-haired Kamaladevi, who weaves the story of her entire life, sitting in front of the handloom she herself revived. By the way, Bhagirathi does not tread the easy path by letting a little girl prance around the stage as little Kamala — from eight to eighty, every facet of Kamaladevi is captured by Bhagirathi.

Kamaladevi was a rebel. She stood her ground defying the boundaries of a conservative society. The freedom that her efficacious resolutions gave her was. A peek into that freedom is through Kamala’s grandmother, a widow, who walks on stage and dauntlessly declares that her jaunts with Mapille won’t stop just because a few knuckleheads gossip about it. 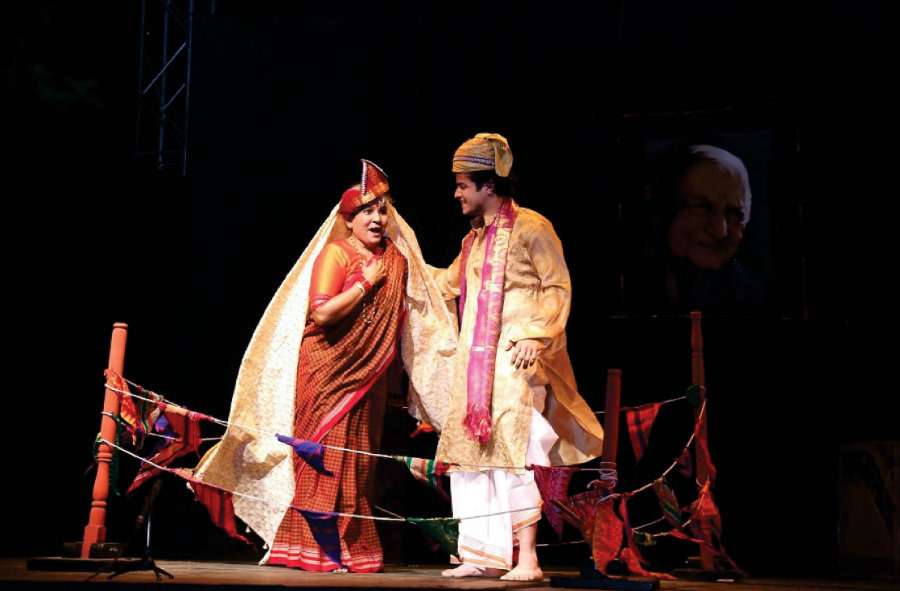 As soon as Bhagirathi moves to this wing of the stage — the setting reminiscent of old Mangalore homes — to introduce this grandmother and many other childhood stories, a youthful verve and naughtiness take over her. “Naa mundu, Taa mundu,” she chuckles. But who really is mundu (forward) is Bhagirathi. There isn’t a scene without her in the entire two hours.

This is a one-woman show, just like Kamaladevi’s life in a way. There is more than this to the uncanny resemblance Bhagirathi’s life has with Kamaladevi. Both celebrate the spirit of theatre. Kamaladevi was born and brought up in Mangalore, married Harindranath from Bengal, built theatre troupes with him, acted in a few noteworthy films, and established the erstwhile National School of Drama (NSD) in New Delhi.

Bhagirathi is a native of Gavadagere in Hunsur, Karnataka and was a student at that NSD. She married Baharul Islam from Assam, with whom she founded and runs the Seagull Theatre Company and is actively contributing to theatre since twenty-five years.

While B. V. Karanth served as Director of Kamaladevi’s NSD, Bhagirathi Bai is now the Director of Karanth’s Rangayana. And the final touch springs from the fact that this play is now being staged for the first time in Kannada, after successful shows in Hindi — offering Kamaladevi’s soul a contentment of mother-tongue and Bhagirathi, a comeback after several years.

In this innovative play — adapted from Vaidehi’s manuscript — one can see Bhagirathi’s dexterity as a Director. She understands the visual property of theatre.

The play braids the story of Indian independence with Kamaladevi’s. Bhagirathi strides saying “Kadam kadam badaye jaa…,” and it feels like a protest. She auctions salt, throws the invisible packets around, and we are almost compelled to catch them. Theatre is a live medium and Bhagirathi taps into this significance to her own benefit.

The scenes in the prison are assembled with just stage lighting, shadows forming the bars of the prison. On it lays Kamala. There’s visual meaning in just every scene: the fish-net drawn through the stage is the Radcliffe line of partition, Kamaladevi who crosses over that is the messiah, the Charaka is Gandhi, bursts of lights are shots of a gun.

And what can we say about Bhagirathi’s acting? It’s a spot-on performance that takes us in. When as a child, Kamala was pulled away from the stage by her mother, she is agitated and stomps the feet like a child whose candy has been snatched away. We see the child and all emotions in the persona — demure, innocence, agony, righteousness, amusement and ferocity. 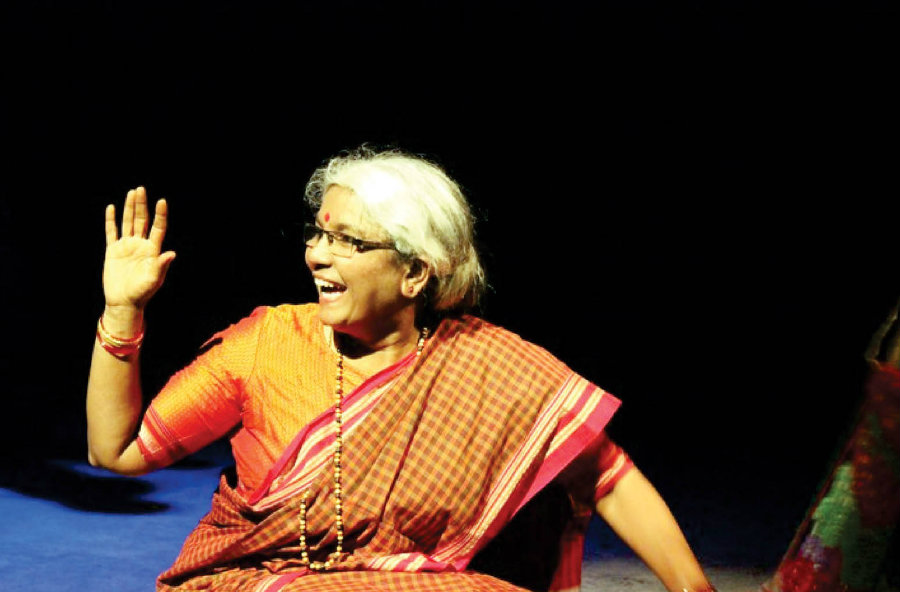 She even mimics Margaret Cousins, Gandhi and Nehru along the way. Even that feels real, because Bhagirathi captures the essence. The emotional truth of the performance makes it more real than impersonations because that truth contains the immortal beauty of Kamaladevi’s soul.

It is not often that we get to watch two female forces on a single stage, in a single evening. But there’s one more show. ‘Kamaladevi Chattopadhyay: Kelavu Nenapugalu’ is being staged at Kirurangamandira in city at 7 pm on Aug.3 (Friday).