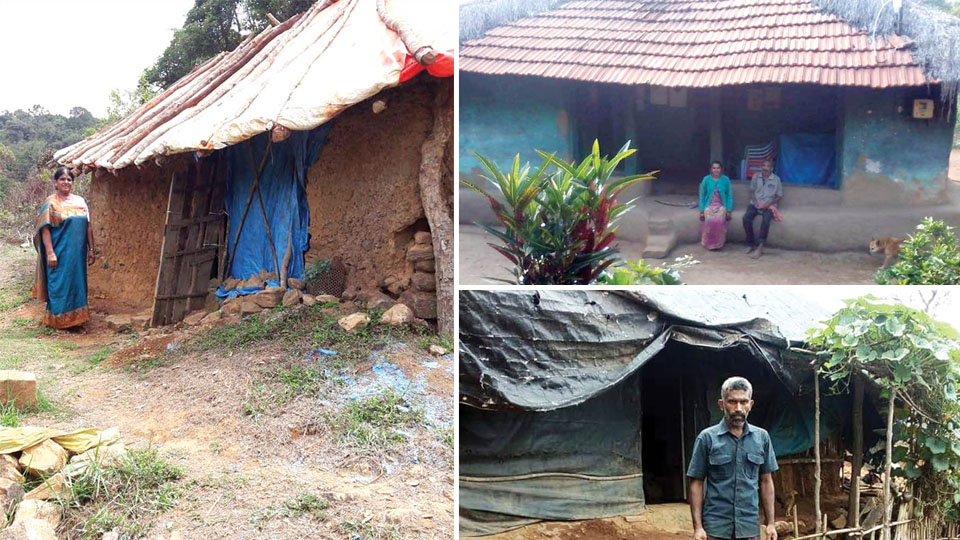 Fear of inundation is giving sleepless nights to residents of Kaloor village in Kodagu that was devastated by floods last August. So much is the fear that villagers shudder even if they hear a small sound of thunder or see a lightning flashing in the sky. As the monsoon is fast approaching, the residents are a worried lot over their future.

The heavy rainfall and the resultant landslide and cloudbursts that rocked Kodagu last August has made the residents of Kaloor to live amidst constant fear of a repeat this year. Whatever remaining of the houses that were destroyed last year and the portions that have been rebuilt by the villagers themselves have already developed cracks, say villagers.

Kodagu received the highest-ever rainfall for August last year, surpassing an 87-year-old record. It was in 1931 that the district received 1,559 mm rain during the entire month. Kaloor was one among the areas that was devastated along with Jodupala, Monnangeri, Second Monnangeri, Thantipaala, Madenadu, Meghathalu, Yemmethaalu and Hebbatageri.

Over 35 acres of paddy fields were washed away by landslides at Kaloor and the present state of the land is that it is filled with debris, wooden logs and bamboo waste. There is not even a shred of evidence to prove that paddy cultivation once existed at this place.

Loose soil from mountains slid over paddy fields and houses too were destroyed razing whatever they had accumulated over the years in terms of furniture, utensils, household equipment, gold and cash. The lives of people were permanently scarred and it may take decades for them to recover from the trauma.

As they are still rebuilding their lives brick by brick with whatever money they had in the bank and with help from friends and relatives (the government did not come to their rescue though tall claims were made) they now fear another catastrophe this monsoon.

Villagers find it ridiculous that after more than seven months of neglect, the District Administration is now telling them that the government would come to their rescue if it rains. “What did not come since the last seven months, will it come now? We have lost hopes and this time too, we have to fend for ourselves,” say villagers.

At Ballyamotte near Kaloor, eight families have their houses near a connecting bridge that is 25 feet high. Kaloor River flows under the bridge and all their houses face the threat of submersion this year too if it rains like last year. Even the bridge too is in danger of being marooned.

“It has not been possible to even repair our houses that were damaged last year. Neither any officer from the District Administration nor any officer or representative from the local Panchayat came to our rescue. We have not even got a single rupee as compensation though the government made tall claims about relief and rehabilitation measures,” said villagers.

Ready to move to Madikeri

At Devasthoor, a half-buried bike by the side of a road stands as a mute testimony to the devastation.  Here too, many acres of paddy fields were washed away and the government has not taken any steps to remove silt.

“In January, we were told that silt would be removed from March this year. However, officials sat quiet soon after the election schedule was announced and did not take up any relief measures. We are only hearing that relief teams will come to our rescue once it starts raining. But there is no guarantee. We are cursed and we have to live with it,” said villagers with a resigned note.

Thambukuthira Damayanthi was more vocal in her dissent over the official apathy. “I came to Kaloor after my marriage 28 years ago. I have not seen such a devastation and helplessness of our people. Officials did some work in towns as eyewash and completely neglected Kaloor and surrounding villages. I have no guarantee that officials will come to our rescue even if it rains more than last year. I have decided, I will move to Madikeri and stay at my relatives’ place till the rainy season ends this year,” she said.

No leave for officers

Kodagu Deputy Commissioner Annies Kanmani Joy has ordered district-level officers to be present at the district headquarters from June 1 to Aug. 31 and not to take leave during the period. In case of unavoidable circumstances, officials may move out of the district centre with the DC’s permission. The decision has come as a precautionary measure for the monsoon season in Kodagu.

The DC has asked Panchayat Raj and Public Works Departments to form separate Task Forces and keep earth movers and jeeps ready for emergency situations. Special attention should be given to rescue children in Anganawadis, schools and colleges.