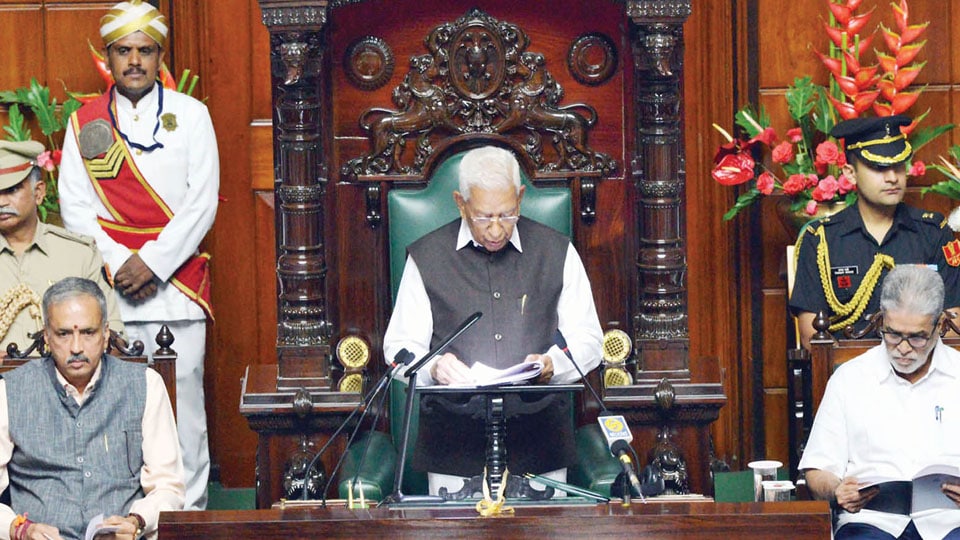 Bengaluru: The first Legislature Session of the year began here this morning with Governor Vajubhai Rudabhai Vala addressing the joint sitting of the Legislative Assembly and the Council at Vidhana Soudha, in Hindi.

Governor Vajubhai Vala read out the achievements, objectives and targets of the Government, highlighted in a    20-page booklet.

The four-day session is expected to be a stormy affair, as the Opposition, led by the Congress, is all set to put the State Government on the mat over several issues, including alleged misuse of sedition laws, Police firing on anti-CAA protestors at Mangaluru, which claimed the lives of two persons, delay in flood relief works, allotment of Forest portfolio to Minister Anand Singh against whom                                                          cases are pending under Karnataka Forest Act and a host of other issues that have rocked the State in the past few months.

On his part, Chief Minister B.S. Yediyurappa is keen to send out a message that the seven-month-old BJP Government has put politics on the backburner and the Government’s focus is on development and redressal of burning issues that have been haunting the State.

The members will debate on the Governor’s address during the four-day session, which concludes on Feb.20.

Meanwhile, Deputy Chief Minister Laxman Savadi, is expected to enter the Legislative Council unopposed  today. The Council bypoll was necessitated following election of Rizwan Arshad of Congress to the Assembly in Dec.5, 2019 bypolls.

The session, which concludes on Feb.20, will resume on Mar.2 and the State Budget will be presented by Chief Minister Yediyurappa, who also holds the Finance portfolio, on Mar.5.