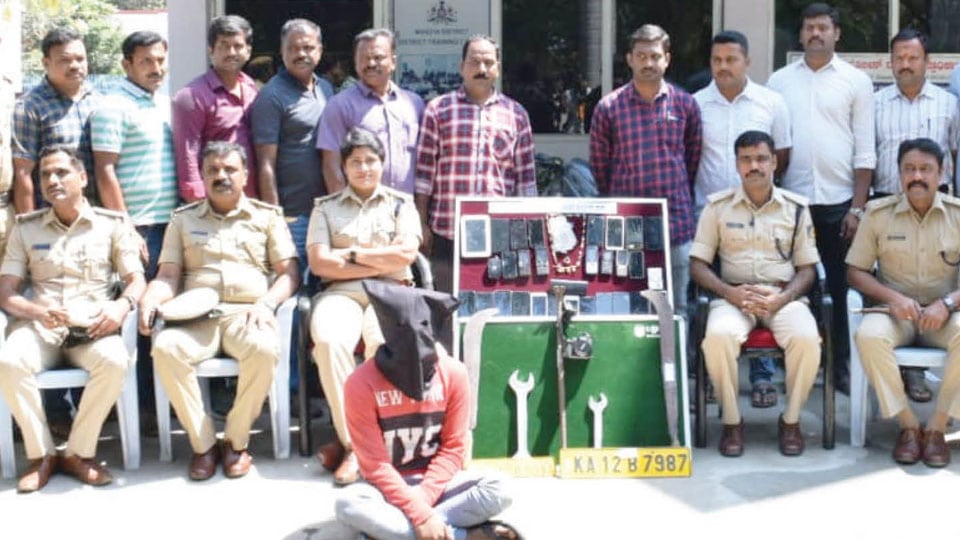 Mandya: Srirangapatna Police have arrested five persons including four minors on charges of committing highway robberies and have recovered four and two-wheelers and other valuables besides seizing machetes, iron rods and spanners  from them.

Addressing a press meet at his office yesterday, Mandya Superintendent of Police (SP), K. Parashuram said that the five arrested include 19-year-old Uday alias Goggaiah alias Kalakar, a resident of K.P. Agrahara at Bhuvaneshwari Nagar in Bengaluru and four other minor boys.

The SP further stated that the accused Uday had involved the four minor boys to commit crimes at Mandya, Bengaluru City, Bengaluru Rural and Tumakuru district, which was revealed during interrogation.

Continuing, the SP said that on Feb. 2 at about 5.25 am, the accused had waylaid one Manikumar of Srirangapatna near Gowripura on Mysuru-Bengaluru Highway, assaulted him and took away Rs. 500 cash kept in his purse, various documents and the bike (KA-07-U-5413).

On the same day at about 5.45 am, the accused threatened one Raymond D’Souza of Madikeri near Kodishettypura on the highway, who was on his way to Bengaluru in his Maruti Swift Dzire (KA-12-B-7987) by faking an accident and made away with Rs. 1,500 cash, documents and the car. A case was registered at Srirangapatna Rural Police Station.

Minor boys from Mysuru Balamandira used for the crime

Accused Uday, who used to commit various crimes, had involved three minor boys who were housed at the Balamandira in Mysuru. Uday, after threatening the staff of the Balamandira, had broke the doors of the Balamandira and had taken away four minor boys with him and used them to commit the crimes, which was revealed during interrogation, the SP said and added that apart from the two highway robberies, accused Uday and the three minor boys were involved in dacoity, extortion and robbery cases in Bengaluru City, Bengaluru Rural and in Tumakuru district and also in other 34 cases.

READ ALSO  Four of a family killed in road accident

Uday kept the minor boys at a house in Magadi

Uday, who took to crime when he was a minor, was housed at a Balamandira and after coming out, he continued the crime and was involving minor boys to commit crimes.

Uday’s brother too is a minor and after securing bail, he had come out of the Balamandira and had joined hands with his brother Uday.

Uday, after threatening the staff of the Balamandira in Mysuru and fleeing with four minor boys had housed them at a building in Magadi, Bengaluru, Police said.

Apart from the above cases, accused Uday has cases registered against him at Begur (three cases), Girinagara (one), Peenya (two), R.R. Nagar (two), Parappana Agrahara (two), Kumbalagodu (one), Talaghattapura (three), Surya City (one), Attibele (one), Tavarekere (two), Byatarayanapura (two), Byadarahalli (one), Sarjapur (one), Tirumalashettyhalli (three), Bommanahalli (three), Madiwala (three remand home escape cases), HSR Layout (one); Pension Mohalla in Hassan (one) and Madanayanakahalli (two) and other places totalling more than 32 cases. Uday, after involving the four minor boys has more than 34 cases registered at many Police Stations in various districts.

SP K. Parashuram lauded the special Police team and has announced a cash prize to them.

Accused Uday, who has committed various crimes may have probably though that he has achieved something and is proud of it. When media persons were clicking photos at the press meet addressed by SP K. Parashuram, Uday told the cameramen, “Publish a big photo  of me Sir…, mention it as Uday alias Goggaiah alias Kalakar Sir…”

When the Police brought Uday to the venue of the press meet, Uday told them, “What will you do to me Sir, you will send me to Balamandira. I will come out in 15 days, just wait.” Uday had told the Police that he was a minor. But Srirangapatna Police, who got the documents from the School in which he studied at Bengaluru, came to know that he was 19 years old and hence not a minor.