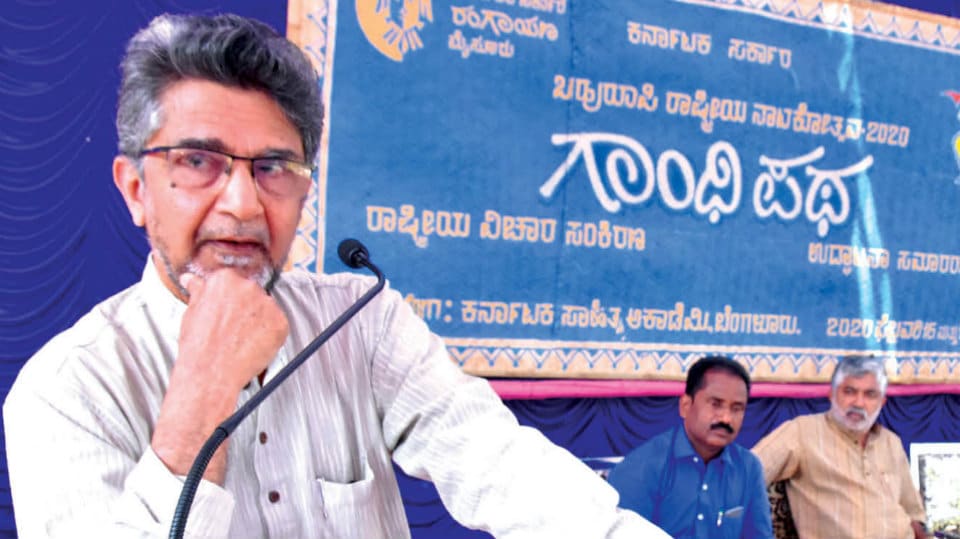 Mysore/Mysuru: Asserting that Mahatma Gandhi’s leadership qualities are relevant for all times, Puttur-based scholar, Lakshmisha Tolpadi said that the Mahatma used to refer to the Bhagavad Gita for solutions to mental anxiety and turbulence.

He was speaking after inaugurating a national seminar on ‘Gandhi Patha’ organised as part of the ongoing Bahuroopi National theatre festival at Kirurangamandira in Rangayana premises here on Sunday.

Lauding Rangayana Mysuru for organising  talks on Mahatma Gandhi with an intention of popularising Gandhian ideals at Bahuroopi, Lakshmisha said that Gandhiji  believed that reading a shloka from Bhagavad Gita would help people overcome their problems. Pointing out that Gandhiji always believed that anything he did in life was an experiment, he called upon the people to lead a truthful life.

Noting that there were many orators amongst us, Lakshmisha said that, “however, these orators cannot be Margadarshaks. Maintaining that Gandhiji used to look to the Gita during difficult times, he said that Gandhiji’s words were straight- forward in nature and in this backdrop the Mahatma was seen by the people as their only Margadarshak.”

Opining that Gandhiji had the strength to explore every thread of life, Lakshmisha said that it was the Mahatma’s strength that pulled us out from the clutches of Britishers. “Gandhiji was the only leader who could explore western culture, standing from the strong roots of Indian culture, while also ensuring that our society does not look up to the western culture,” he added.

Stating that many of our women folk who became victims of sexual abuse during the country’s partition were treated as untouchables by keeping them out of the house by their own kith and kin, Lakshmisha said that it was Gandhiji who came to the rescue of the women victims by calling these women victims as his sisters. Gandhiji asked the society to accept them as they were, as pure as ‘Sita’ of Ramayana.

Asserting that Gandhiji always believed that devotion and fondness must not be limited to words alone, he said that he wanted everyone to face the test of truth (Agnipariksha) for attaining a life of value.

Calling Mahatma the biggest votary of peace, Lakshmisha said that Gandhiji only targeted the souls of his opponents and not their physique.

Recalling his younger days, he cited an instance when he went to a Mutt to learn Sanskrit. The Mutt seer taught him a Sanskrit work, ‘Angla Samrajya Vaibhavam,’ written by a scholar. Stating that he still remembers a line from that great work, ‘Bhoomandale landana Namadhyeyam,’ Lakshmisha  said that the poem had made him wonder whether we are following everything that is British.

Referring to Gandhiji’s opposition to mechanisation, he recalled an instance when Gandhiji gave a befitting reply to a journalist’s query on why he opposed mechanisation. Gandhiji had said that the cattle used in farming gives us milk. The cow also gives us cow dung, which is a very good natural  manure, while a tractor used in cultivation does not give us any substance of use in return.

Stressing the need  for everyone to understand Mahatma Gandhi and Dr. B.R. Ambedkar, he said that the arguments and counter arguments between the two were interesting and awakened us on many societal issues. Stating that reading about Mahatma and Ambedkar will help us develop social conscience, Lakshmisha called upon everyone to inculcate Gandhiji’s ideals in life.

Stating that today’s society is divided between two groups, with both groups accusing each other, Lakshmisha opined that both of them were on the wrong side, as they stick on to their own logic and mind without giving scope for discussions.