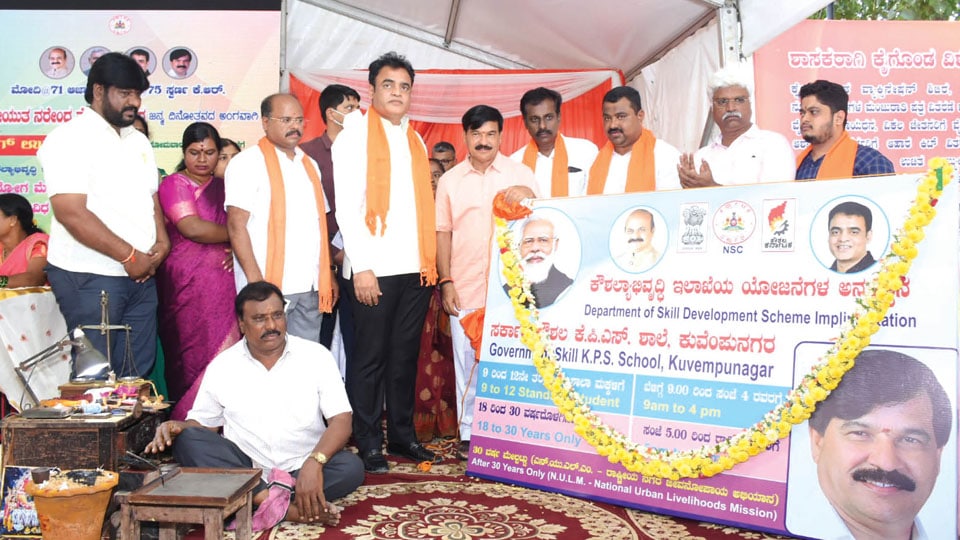 Mysore/Mysuru: Maintaining that acquisition of latest skills is the need of the hour to get jobs, Minister for Higher Education, IT and BT Dr. C.N. Ashwathnarayan said that the Government is giving a big push for ensuring that students  at all levels learn the required skills for shaping their career.

He was speaking after inaugurating the day-long Job Mela and implementation of skill development programmes organised by K.R. Unit of BJP as part of ‘Azaadi Ka Amrut Mahotsav’  and ‘Modi Yug Utsav’ at the Park near Ramalingeshwara temple in Vidyaranyapuram here this morning.

Observing that the country is lagging behind western and other developed countries in terms of skills acquirement among the population, Dr. Ashwathnarayan said that while USA has 56 percent and Japan and Germany have 80 percent of skilled population, India has a skilled population of just 5 percent, which needed to be increased quickly in  keeping pace with advancements in science and technology.

Maintaining that the Government has identified 150 of the over 1,200 ITIs (Industrial Training Institutes) in the State for upgradation in keeping with modern standards, he said that the Department will be funding Rs.30 crore to each of the identified ITIs, where over one lakh students will be collectively trained in skill development and enhancement.

Highlighting the measures taken by the Government for ensuring that all skilled and trained candidates get full employment, he said that the Government is working on making this initiative a cent percent success.

Lauding the efforts of MLA S.A. Ramdas in taking Government schemes and welfare measure to the doorsteps of the people, he said that the MLA very well knows what is needed for the people and as such, he has taken pains to organise this job mela, for the benefit of skilled candidates.

MLA Ramdas, in his address, said that he has organised three such Udyoga Melas post the outbreak of COVID pandemic last year, in which more than 10,000 candidates participated and around 3,000 of them succeeded in getting jobs.

Emphasising on the need for learning skills in keeping with latest advances, he said that there are 495 two-wheeler and four-wheeler  repair shops in the city and he has planned to train 3 mechanics from each of these  shops for upgradation of skills.

Minister Dr. Ashwathnarayan symbolically issued appointment letters to eight candidates who were selected by different companies that participated in the Job Mela.

Students from Government KPS School in Kuvempunagar presented a demonstration on basic IT developments.