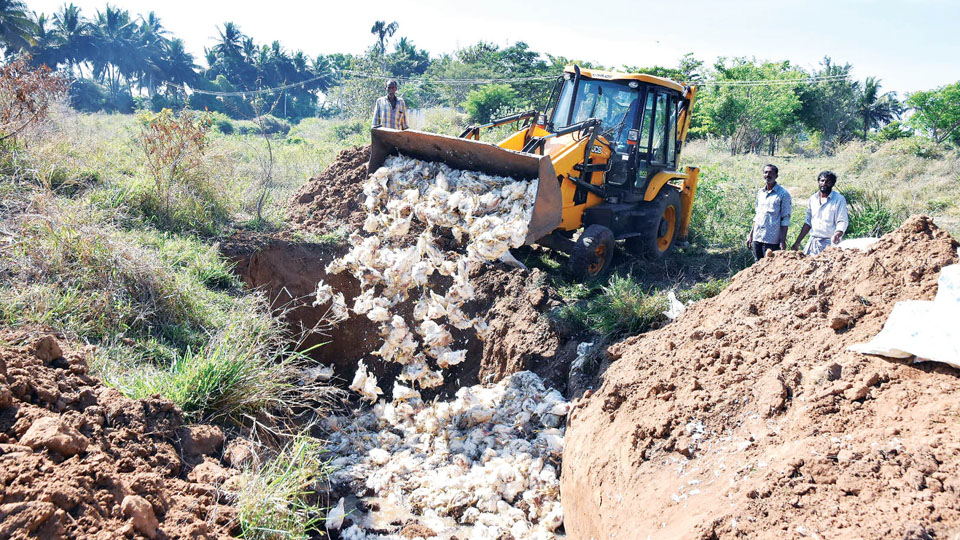 Government to pay Rs.90 per bird as compensation to Poultry owners

Mysuru/Mysore: With Mysuru District Deputy Commissioner Abhiram G. Sankar on Monday ordering culling of birds in 10-km radius of the spot at Kumbarakoppal where a few birds were found dead recently and Lab reports confirming that two of the dead birds had died of Avian Influenza or Bird Flu (H5N1), the city authorities began mass culling of chickens today.

A 20-member team of Veterinary doctors and other staff from the Veterinary Department and the Mysuru City Corporation (MCC), comprising Veterinary Dy. Director Dr. Ajith Kumar and Asst. Director Dr. S.C. Suresh, visited a poultry farm on Ring Road this morning and launched the day-long operation for mass culling of 4,500 chickens there.

Mass culling is done as per Bird Flu management  protocol, according to which the officials will begin their operation by methodically marking the area as Avian Flu infected. Later a public announcement is made regarding mass culling, following which the chickens are buried in a huge pit dug up for the purpose and the process will complete by this evening.

Then, the chickens are dumped en masse (4,500 today) into the pit and buried. Thereafter, the pit is covered with excavated mud, following which bleaching powder and Sodium-Hypochlorite liquid is sprayed around the entire premises of the poultry farm as a sanitisation measure. All the Veterinary Department and MCC staff involved in the operation were provided protection kits and N95 face-masks.

Tomorrow, the second day of the operation, the team of Veterinary Doctors, Livestock Inspectors and attendants, will cull birds at a poultry farm in B.M. Shri Nagar and on the third day on Thursday, the culling will be taken up near Hebbal burial grounds.

With the District Administration launching mass culling operation of birds, the Government has proposed to pay the poultry owners a compensation of Rs.90 for every culled chicken.

A poultry farmer in Srirangapatna taluk buried thousands of chickens this morning at his farm amidst the Bird Flu scare.

Vinay Kumar of Naguvinahalli in Srirangapatna taluk, Mandya district, said that he found some chickens at his poultry farm dying all of a sudden for the past one week. Fearing that he may not be able to sell them, he culled 4,000 chickens at his farm by burying them in a pit. He said that he has been rearing chicken in his poultry farm located at Brahmapura near his village since 6 months.

“This is the second batch of chickens that I am breeding. There were about 3,500 to 4,000 chickens in my farm. Since the past one week some birds started dying enmassse, may be due to a disease. Due to decreasing demand, I have already lost lakhs of rupees. I had to bury them to avoid further spread of Bird Flu,” Vinay Kumar pointed out.