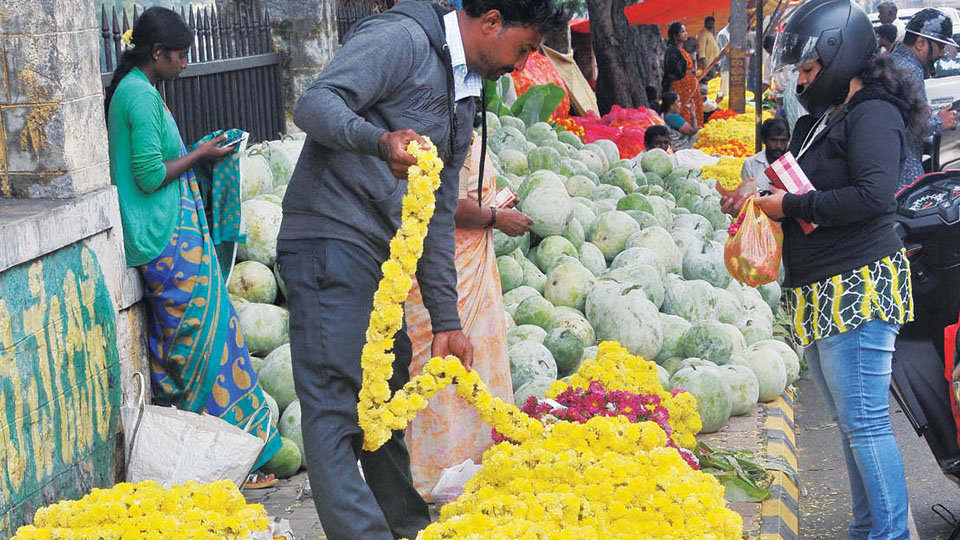 As the weatherman has predicted rainfall during evenings, people rushed to the markets early this morning to purchase materials for the puja. And the vendors were not at all complaining as they too were in hurry to sell off their produce and head home before it starts pouring again.

Markets and places including Devaraja Market, Sayyaji Rao Road, Chikka Gadiyara, by the side of J.K. Grounds, Dhanvanthri Road, Valmiki Road, Nanjumalige Circle, Ballal Circle, Kuvempunagar Com¬plex, Agrahara, Bandipalya and M.G. Road Market were teeming with people. Though the prices of puja items were high, it did not deter the people from buying.

Puja items like kadle puri, khara boondi, ash gourd, flowers, banana and mango leaves sold like hot cakes and the vendors were calling their customers with attractive offers. On the Dhanvanthri Road, vendors had set up make-shift tents to sell flowers and puja items. Some enterprising vendors had all the items that are required for pujas at one place.

Ash gourd, which is in great demand during Ayudha Puja, was being sold at rates varying from Rs. 30 to Rs. 300 depending on its size and weight. Vendors had brought flowers, banana stalks, mango leaves from Mandya, Srirangapatna, villages adjoining Krishna Raja Sagar, Mallanahalli, Katteri and Siddapur.

The District Administration has left no stone unturned for smooth and safe conduct of Jumboo Savari, the stellar event of Dasara festivities.

The colourful Vijayadashami procession along with 40 tableaux and cultur¬al troupes, will be inaugurated by Chief Minister Sid¬dharamaiah on Sept. 30 (Saturday) at the Mysore Palace premises at 4.45 pm in the auspicious Kumbha Lagnam. Prior to the CM inaugurating the procession, puja will be per¬formed to Nandi Dhwaja near the Balarama Gate of Mysore Pal¬ace at 2.15 pm in the auspicious Makara Lagnam.

The CM will perform puja and shower flower petals to the idol of Goddess Chamundeshwari, the presiding deity of Mysuru placed inside the 750-kg Golden Howdah (Ambari) mounted on the broad back of Howdah Elephant Arjuna.

Torchlight Parade: Governor Vajubhai R. Vala will receive the salute at the Torchlight Parade at Bannimantap Grounds at 8 pm on Sept. 30. CM Siddharamaiah will be the chief guest along with his Cabinet colleagues.

Vajramushti Kalaga: Among main attractions during Dasara is the Vajramushti Kalaga which is held on the day of Vijayadashami every year. It is the centuries-old traditional wrestling contest held in the Kannadi Thotti of Mysore Palace. This year, the Kalaga will be held on Sept. 30 from 11 am to 11.30 am.

Palace geared up for Ayudha Puja

Dasara celebrations always adds a royal flavour to the festivities. It showcases the culture and the efforts of the Wadiyar family to keep their tradition alive. On the day of Ayudha Puja (tomorrow), the ancient tradition unfolds on the famous Mysore Palace premises during the Navaratri festivities, bringing alive memories of a bygone era.

The Mysore Royal family has always played a significant role in the rituals and festivities and even today the family members perform the Ayudha Pooja inside the courtyard of the Palace. During Ayudha Pooja, a special puja is performed on the weaponry of the bygone era as well all the vehicles and animals in the Palace. From the BMWs owned by the family to the cows and horses, all of them form a part of the ritual.

Yaduveer Krishnadatta Chamaraja Wadiyar, the titular head of the Mysore royal family in his third Dasara will perform puja to the royal armoury (Khas Ayudhas).

The rituals will begin with Chandi Homa at 6.15 am.  Pattada Aane, Pattada Kudure, Pattada Hasu will arrive at Aane Bagilu and 6.45 am. Sending of Khas Ayudhas to Sri Kodi Somesh¬waraswamy Temple through Aane Bagilu will be at 7.25 am, and the weapons will be brought back from the temple between 8.20 am and 8.40 am.

From 8.45 am to 9 am, there will be Purnahuthi at Chandika Homa room. Arrival of Patta¬da Aane, Pattada Kudure and Pattada Hasu at Savari Thotti will be at 11.30 am. The actual Ayudha puja will begin from 12.15 pm to 12.45 pm. Durbar by Yaduveer at Amba Vilas Durbar Hall will be held from 7pm after which the process of Simha Visarjana and Kankana Visarjana will be taken up. Later, Yaduveer will arrive at Sri Amala Devatha Sannidhi.

On Sept. 30, at 11 am, Pattada Aane and Pattada Kudure and Pattada Hasu will arrive at Aane Bagilu and from 12.10 pm, Khas Ayudhas will be sent to Bhu¬vaneshwari temple in the Pal¬ace premises after Uttara Puja by Yaduveer. He will also take out a Vijaya Yatre and perform Shami Puja and after Vijaya Yatre, the idol of Goddess Chamundeshwari will be returned from Kannadi Thotti to Chamundi Thotti.