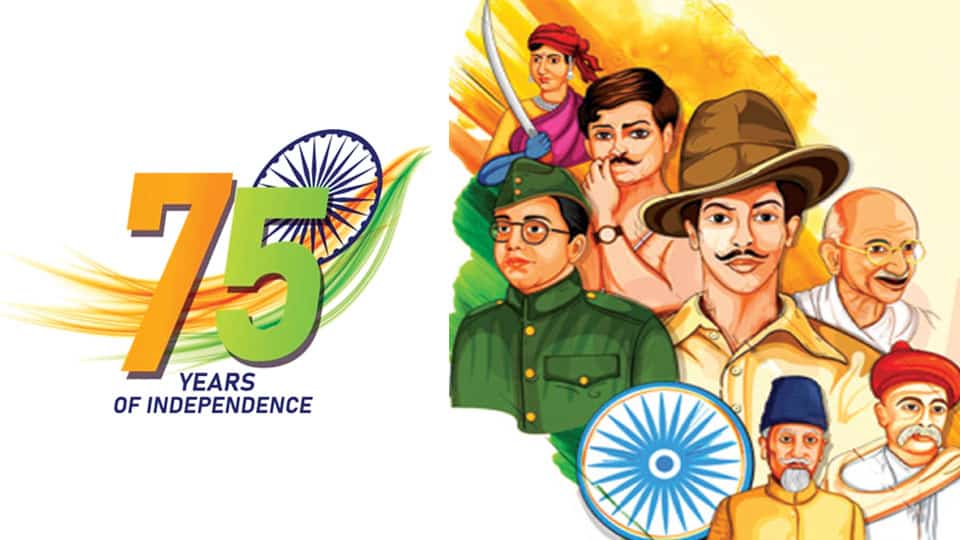 We celebrate 2022 in a special way as it is the 75th year of Independence. At this juncture, it is necessary to remember our people’s struggle for freedom — many known and unknown heroes have sacrificed their lives. Here is a glance at our freedom struggle from 1857 to 1947.

The events are in chronological order for easy understanding.

Mangal Pandey started the first revolution against the British in Meerut in 1857 but he was caught and hanged to death. Inspired by this, Kunwar Singh  from Bihar, Bakht Khan from Delhi, Nana Saheb and Tatya Tope (Tantiya Tope) from Kanpur and Rani Lakshmibai from Jhansi as well as the Sikh regiment of Punjab joined the struggle unitedly.

The Bengal region could not remain silent in this movement and in 1862, it joined hands to oppose blue agriculture; hence it was called as Blue Revolution of Bengal. Swami Dayananda Saraswati started creating awareness through ‘Arya Samaj’ in 1875.

In Kolkata, Surendranath Banerjee founded the ‘Indian National Association’ in 1876. In the same year, ‘Vande Mataram’, full of patriotism was penned by Bankim Chandra Chatterjee in Sanskrit. Only this song has the capacity to be placed equivalent to our National Anthem.

Madras did not remain untouched by all these activities. Dr. Annie Besant founded the Theosophical Society of India in 1882 which helped people unify action through intellectuals. In 1885, the Indian National Congress (INC) was founded by A.O. Hume.

In 1893, Swami Vivekananda reached Chicago, America and delivered his world famous speech about India and its philosophy. He gave the message of awakening —  “Arise awake and stop not until the goal is reached.”

In 1905, Bengal was divided as per the British policy of ‘Divide & Rule’ and the Muslim-dominated area of Bengal was separated and East Bengal was created.

In  1906, the Congress session was held in Calcutta where Lal Bal Pal joined hands to strengthen the freedom movement — Lala Lajpat Rai from Punjab, Bal Gangadhar Tilak from Maharashtra,  and Bipin Chandra Pal from Bengal. They were at the forefront and had a unified thought as far as independence strategies were concerned and infused new strength.

In 1908, in Calcutta, Khudiram Bose and Prafulla Chandra Chaki prepared a bomb and threw it on the then Magistrate Douglas Kingsford, who was killed. In 1909, the British announced a major reform to bring change to the Indian administration, which was called Morley-Minto Reform.

In 1911, the magnanimous Delhi Durbar was organised in honour of King George V. The division of Bengal was cancelled. Till this time, the functioning of East India Company and the British Government was being done from Calcutta, but from 1911 it was shifted to Delhi and a big function was arranged.

Nobel Prize recipient Rabindranath Tagore penned a poem in praise of King George V —  Jana-gana-mana adhinayaka — which was sung by the topmost singer of that time. Gauhar Jaan of Calcutta sang it in the Delhi Durbar and received big honour. From 1911, Delhi became the British capital.

Gauhar Jaan was a Hindustani classical singer and it is quite interesting to know that she was invited to perform at the Mysore Palace. The Maharaja was the patron of all performing arts and as such he offered Gauhar Jaan a permanent place in Mysore. She was staying in Mysore near today’s Chamundi Vihar Stadium in a spacious bungalow and breathed her last in K.R. Hospital in 1930.

The year 1919 was the year of  Montagu-Chelmsford Reforms and the Rowlatt Act were passed. This is the year when the Jallianwala Bagh massacre took place where thousands of people were brutally killed under the orders of General Dyer.

While people started protesting, they were punished mercilessly. In this protest, Lala Lajpat Rai was badly hit and died. In 1930 Gandhiji met Bhagat Singh who was just 18 years old and when Bhagat Singh said ‘Sat Sri Akaal’ to him, Gandhiji advised him to say ‘Vande Mataram’. This motivated Bhagat Singh.

In 1930, Rajguru was caught and in 1931, patriots Rajguru, Bhagat Singh and Sukhdev were hanged to death. In 1940, Muslim League Session was conducted and they proposed total freedom.

The year 1941 was a crucial and equally important year when Subhas Chandra Bose organised Indian National Army. He firmly believed in the policy of ‘tit for tat’ to the British and he also thought that only by our mental and physical strength we can remove the British Government.

For this, he wanted to unite people so that he could train them in his Army. His popular slogan was ‘Give me blood, and I shall give you freedom.’ Thousands of people joined him while others donated money and women voluntarily offered jewellery. Such was his forceful voice.

The Quit India Movement began in 1942 and the country came under one banner. All united to protest and oppose the British strongly. In the coming year, the movement became strong. As a result in 1946, the British Cabinet Mission came to India to solve the problem. At this time, the interim government rule was implemented.

The total and solid effect of all the sacrifices by the brave patriots and freedom fighters was so powerful that a day soon came when the British had to agree to freedom and granted it on Aug. 15, 1947. But before that India was partitioned as per the demand placed by the Muslim League.

The long years of slavery ended but we have to keep alive in our hearts the sacred memory of those great martyrs who made tremendous sacrifices for the attainment of freedom. The real celebration this I-Day is to worship those patriots who shed their blood for achieving freedom for us.