Home » Columns » Back to James Bond & my quest for his Gun ! 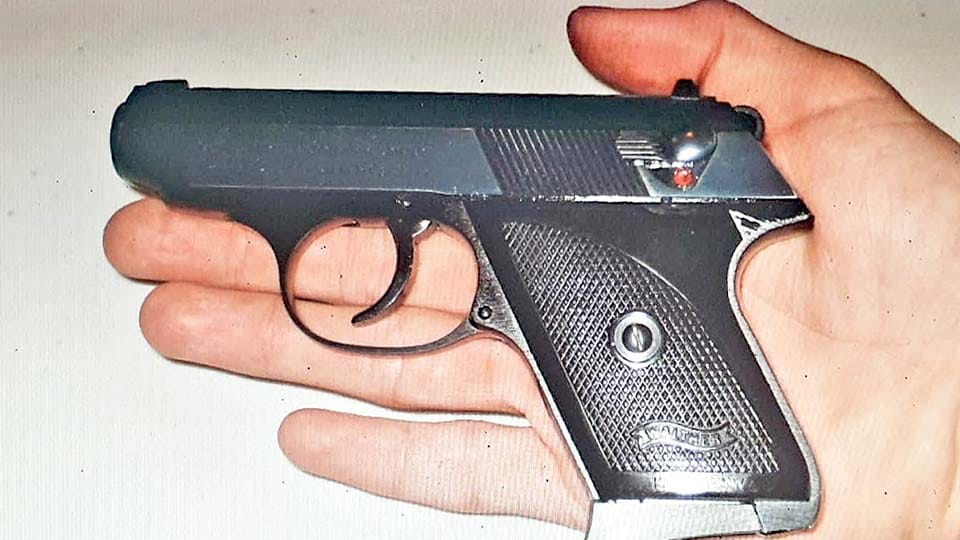 Back to James Bond & my quest for his Gun !

Last week I told you about my great desire to possess the legendary Walther pistol of the James Bond fame and how I had so far been unsuccessful in acquiring even a licence for it, let alone the gun itself. Today I’ll tell you about how luck smiled on me, through someone else’s pain! Sheer serendipity can sometimes shower you with unexpected gifts if luck is on your side.

Late one night while I was on duty as a post-graduate student in the Department of Medicine, the wife of a very senior DIG of Police was brought to the emergency room with very severe chest pain which came on suddenly as she was watching the Bollywood movie, ‘Star’ with her husband in a theatre. The pain was so sudden and so severe and accompanied by such profuse sweating that she seemed to have had a massive heart attack although she was certainly much too young for it. Thankfully, my examination, aided by an ECG, ruled it out but she had to be hospitalised for the necessary diagnostic tests and appropriate treatment.
Since she was a VIP patient, very soon, my professor, Dr. N.A. Jadhav himself arrived at the hospital in a Police car with a retinue of Police Officers following him in two jeeps. After examining the patient, he advised the requisite treatment to relieve her pain and the necessary investigations to make a diagnosis. He also announced that I would be in sole charge of looking after the patient for the entire duration of her stay in the hospital. To reassure her very anxious and visibly perturbed husband, he spoke very highly about me and my abilities and said that I would personally oversee all the investigations the next morning.

That is when I very apologetically told my professor that since I had an important appointment with the Superintendent of the Deputy Commissioner’s Office the next morning, I should kindly be excused from this responsibility. The visibly jolted DIG immediately asked me the reason for my appointment when I explained to him that I had to go over and meet the Officer the next day to sort out the slight difficulty that I was having in getting my gun licence papers cleared. That is when the very distressed man clasped my hand in both his hands firmly and pleaded, “Doctor, I request you to please concentrate on my wife’s treatment on top priority tomorrow. She is in great pain and I want her to get well at the earliest. You can leave your entire gun licence problem to me and I promise you that I’ll sort it out for you, on top priority.”

That is exactly what I wanted and that is exactly what I did! How could I not follow such a high-ranking Police Officer’s orders? After that I almost became a high-ranking Police Officer myself for a good many days, with a gleaming Police car with a red beacon, picking me up from home every morning and dropping me back from the hospital every evening, to the astonishment of all my neighbours. As if this was not enough, all the Traffic Policemen along the three-kilometre route would spring to attention and salute me every time I passed by in the Police car with a very embarrassed me nodding my head or waving my hand at them. And, this embarrassment lasted all through the VIP lady’s stay in the hospital!

Thankfully, in a remarkably short time she recovered sufficiently for her to be discharged, although she had to be advised a fairly long period of convalescence at home. About a week after her discharge, while I was sitting in the Medical College canteen chatting with a small group of friends, a Sub-Inspector of Police and two Constables came looking for me. For a brief moment everyone around me naturally seemed a little perturbed by this development, thinking that I had run into some kind of trouble with the law. But after confirming that I was the man they were seeking, the trio sprang to attention and saluted me smartly after which the Sub-Inspector handed me a sealed brown envelope. When I opened it, I found the gun licence I was seeking so hard, for so long! A special endorsement in it also said that it was valid all over India which was a very rare privilege! My joy knew no bounds and at that moment I realised that it is indeed true that in pain lies our pleasure… as long as the pain is somebody else’s!
When I immediately called up the DIG from the hospital telephone booth to thank him, he said that the licence was a very small token of his gratitude to me and asked me to meet his friend the Deputy Commissioner personally and thank him too. Following his orders this time too, I proceeded to the Deputy Commissioner’s Office immediately. And, that is when I ran into what seemed like some very unexpected trouble.

Upon being ushered into his office by the turbaned durban, the Deputy Commissioner motioned me to sit down and said, “Doctor I must tell you that on seeing you in person today I’m a little surprised and perturbed too. As an applicant for a pistol licence I was expecting to see a much older man and certainly not the youngster who is now standing before me. I really don’t understand why such a young man like you should own a pistol too when you already have a gun. Had I seen you before signing your licence, I’m sure I would have cooked up some excuse for refusing it. But sadly, now that it is in your hands safely, it’s too late for me to do it and so I wish you a safe life with the pistol that you are going to acquire and carry! Good luck to you.”

Not to be outdone, I had the last word by telling him, “Sir, please don’t worry, I too will grow up and very soon become the much older man you wanted to see!”

Sometime later, the DIG informed me that it would be better for me to buy my pistol from Singapore as it would be considerably cheaper there than here in India. And, he also got me the requisite clearance letter from the Deputy Commissioner for importing the weapon. But he advised me to do it as early as possible because he felt that with the militancy problem in Punjab gaining much momentum, the import of firearms into the country would most likely be banned to stem the brisk inflow of arms into the strife-torn State.

Once again, I followed his orders, most obediently. We came to know that the discounted cost of the round-trip to Singapore under a special limited time offer, which also included Hong Kong, Thailand and Malaysia was just rupees nine thousand, without food and accommodation. So, at the time of booking my ticket, my father on hearing the surprisingly low cost of the round trip, decided to book it for our entire family of six instead of just for me.

Incidentally, it was during this trip that at the famous Bangkok snake show, I stunned the large audience of tourists and locals and nearly frightened the showman himself to death, by accepting his challenge and boldly tasting the king cobra venom that he extracted and offered, even as he warned me that a drop of it was enough to kill an elephant! But that is a different story about which I have already written some years ago in my narration of the many rash and foolhardy things I’ve done in my life.

At Singapore which was our last stop, after getting the requisite clearance from the Indian embassy, I finally bought the gun of my dreams from Hock Ann Sports on Beach Road there. The cost of the gun which used to then sell for about one lakh rupees here in India, was the equivalent just two thousand five hundred Indian rupees there. But the dealer warned me that I would have to pay a full one hundred percent customs duty for it in India which I said I would be happy to do. He was so impressed by my knowledge about guns in general and the Walther range of pistols in particular, that he happily showed me the different kinds of guns he had in stock although I had no intention of buying them. We sat discussing various guns and their inherent virtues and vices for a long time, a discussion which we both enjoyed very much.

And, when it was time for us to part after my purchase, he included one spare magazine for my pistol and fifty rounds of the best American self-defence ammo completely free of cost! Since Singapore has some of the strictest gun control laws in the world, my pistol and its ammo were packed and sealed in my presence and delivered by the dealer directly to the check in authorities at the Changi airport who in turn handed it over to the pilot of the aircraft by which we travelled.

We flew back to India after a happy, two-week-long family holiday, with me exiting the airport, triumphantly holding Bond’s legendary gun in my hand! And, that is the gun I still keep under my pillow, fully loaded and ready to fire, every passing night and play the role of James Bond in all my dreams, even to this day!

Note: Just two months after I brought my pistol into the country, the import of all firearms into India was banned and this ban is still in place. The DIG who helped me to get my licence went on to become the Director General and Inspector General of Police for the State and till he passed away, he remained very close to me.