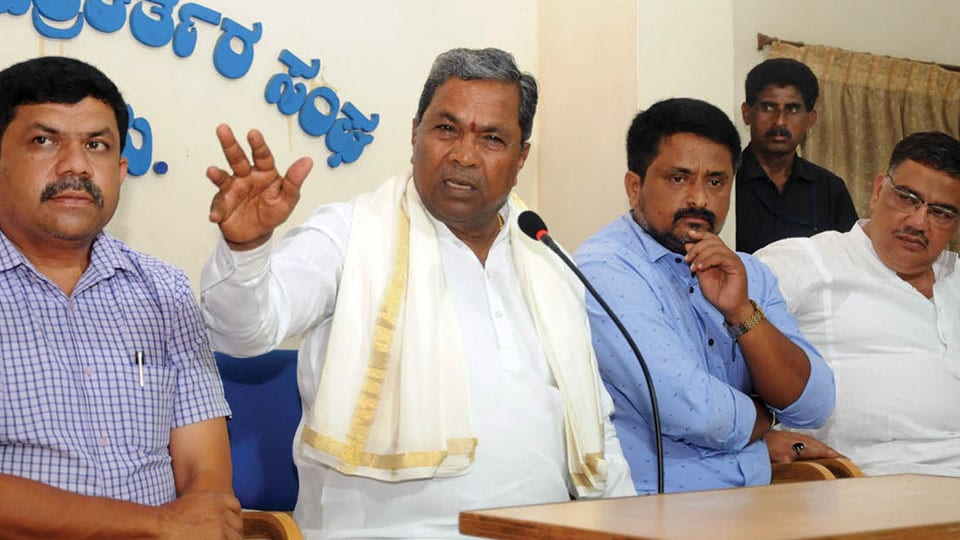 Mysuru:  The suspense over Chief Minister Siddharamaiah contesting in two seats — from Badami in Bagalkot District and Chamundeshwari in Mysuru District — continued even today as the Chief Minister is playing cards close to his chest. He said, “You will know tomorrow.”

At an interaction with journalists organised by Mysuru District Journalists Association (MDJA) at the jam-packed Pathrakarthara Bhavan in city this morning, Siddharamaiah spoke at length for over 45 minutes. He answered a series of questions posed by the journalists on his contest   from Badami.

The questioning by journalists was intense as CM’s son Dr. Yathindra had tweeted and posted on Facebook this morning that his father will contest from Chamundeshwari and Badami and the CM will file his nomination papers for Badami on   Apr. 23, a day before the last day of nomination filing.

Fielding questions with a smile, Siddharamaiah told journalists to wait for a day. “Yes. There is pressure on me to contest from Badami and many leaders and party workers have met me. I will speak to Congress President Rahul Gandhi this evening and will let you know tomorrow,” he said and added that things were hazy at the moment and it will be clear by tomorrow morning.

When asked about the purpose of his son’s social media posts if things were not clear, the CM, defending his son, said, “Yathindra was there when leaders from Badami had come to meet me and he could have posted the same. Yathindra’s decision is his and not mine.”

Speaking on other wide-ranging topics, Siddharamaiah, the longest serving Chief Minister (full five-year-term) in 40 years after D. Devaraja Urs, said he is confident that his party will return to power. “If the national scene has to change, the Congress has to come back to power in Karnataka. Look at how the communal forces are spreading disharmony in the country. Minorities, Scheduled Castes, Scheduled Tribes and Backward Classes are living in fear,” he claimed.

Training his guns on BJP and JD(S), Siddharamaiah said, “The BJP is set to destroy the secular fabric of this country. The BJP cannot be allowed to continue if democracy has to be restored and the Constitution respected. The JD(S) is a party of opportunists. Both the parties are dreaming that they will come to power,” he said. 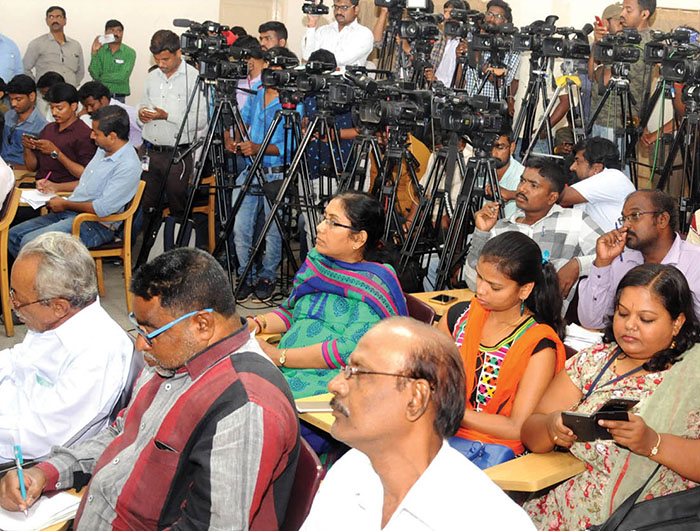 On questioned how confident was he that the elections will not result in hung Assembly, the CM said that they had conducted many internal party surveys  that showed Congress was popular than the BJP and the JD(S). “There is a pro-Congress wave in Karnataka and not anti-Congress. This is due to the achievements of my government that has fulfilled all the 165 promises that were listed in 2013 manifesto,” he claimed.

On the law and order front, the CM claimed that his government has an ‘excellent’ track record that has been proved by the statistics released by National Crime Records Bureau (NCRB). “The JD(S) and the BJP have colluded and are single-handedly targeting me. But all these do not matter as people of Karnataka are intelligent,” he said.

The Pathrakarthara Bhavan that is usually empty whenever some political leader holds a press meet or interaction was packed today and the hall was teeming with journalists and cameramen from print, visual and online media.