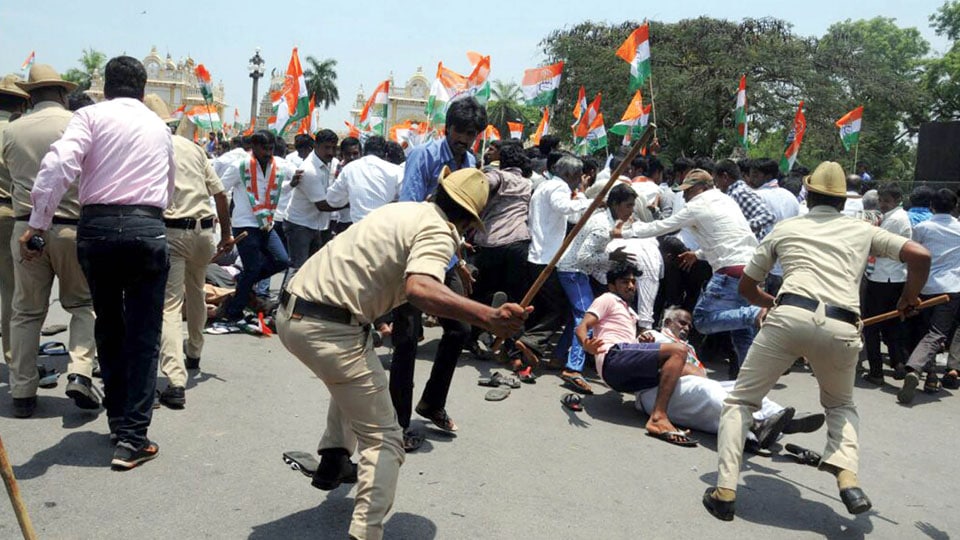 Mysuru: Even as both Chief Minister Siddharamaiah and JD(S) MLA G.T. Devegowda (GTD) were on a temple-hopping spree before filing their nominations separately for the Assembly election from Chamundeshwari, tense situation prevailed this noon at Kote Anjaneyaswamy Temple.

The CM, after performing puja at Siddarameshwara Temple in Siddaramanahundi (his native) offered puja at Chamundeshwari Temple atop the Chamundi Hill and then reached Kote Anjaneyaswamy Temple.

Meanwhile, GTD who had visited the Chamundeshwari temple along with his wife Lalitha Devegowda and son G.D. Harishgowda to offer puja, reached the Kote Anjaneyaswamy temple at 1.12 pm and after offering pooja accompanied by the leaders    and legislators left in a procession to the Taluk office in Mini Vidhana Soudha to file the nomination papers. 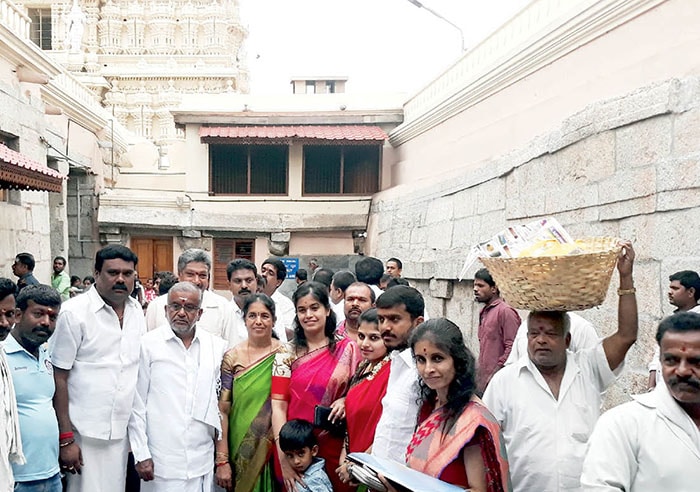 MLA G.T. Devegowda seen with his wife Lalitha Devegowda, son G.D. Harishgowda and others at the Chamundeshwari temple in city this morning.

The road from K.R. Circle to Hardinge Circle was completely jammed and traffic was disrupted. The supporters of both the parties were waving party flags and shouting slogans. Since both the parties were trying to display a show of strength, heated words were exchanged. As the situation was getting out of hand, the Mounted Police also arrived at the spot and controlled the situation.

Thousands of supporters of Congress and JD(S), who had assembled in front of Kote Anjaneyaswamy temple
before the arrival of Chief Minister Siddharamaiah and MLA G.T. Devegowda, who were scheduled to take out
separate processions before filing their nominations this afternoon.

The CM came after GTD left and offered prayers at the temple and then left to file his nomination papers to the taluk office where GTD had filed his papers earlier.

The Police were taken to task for mishandling the situation and allowing supporters of both the parties to gather near the Anjaneya Swamy Temple at the same time.