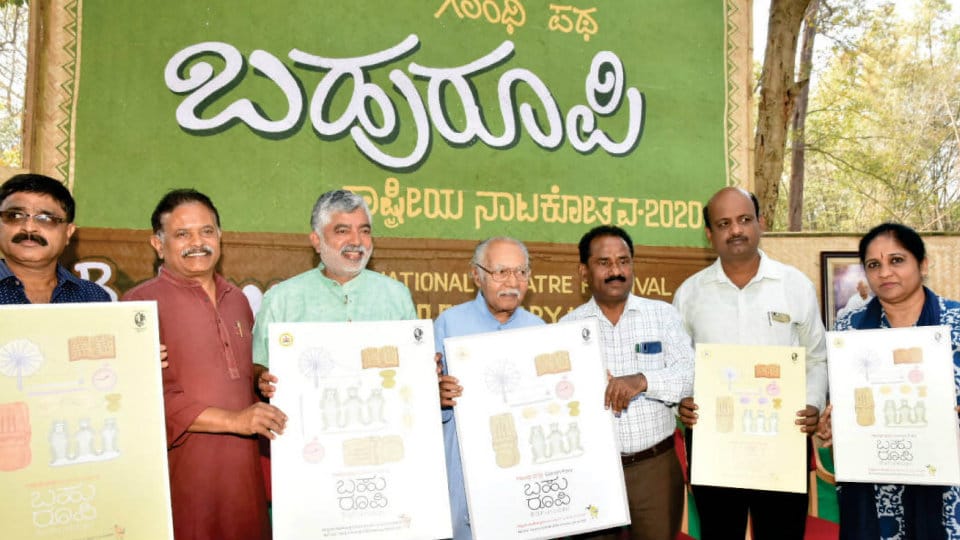 Mysuru/Mysore:  “The Bahuroopi National Theatre Festival, based on theme ‘Gandhi Patha’ (Gandhi’s Path), will be held at Rangayana from Feb.13 to 19. Officials must make all preparations for holding the Festival,” said Additional Deputy Commissioner (ADC) B.R. Poornima.

She was addressing the officials of various Departments at the preliminary meeting held at Kalamandira here yesterday.

With just 15 days left for the inauguration of much awaited annual Theatre Festival, which draws thousands of theatre buffs to the venue, Rangayana released the Fest Poster this morning.

Senior theatre artiste Dr. H.K. Ramanath released the posters and the final list of plays which will be staged during the Fest.

Speaking after releasing the posters, Dr. Ramanath said, “Rangayana is the dream project of B.V. Karanth. This is the 20th edition of Bahuroopi. Since its inception, Rangayana is working for promoting peace and harmony among people.”

Rangayana Director Addanda C. Cariappa briefed about the upcoming Festival and said: “On the occasion of 150th birth anniversary of Mahatma Gandhi, the theme for the Festival this year is ‘Gandhi Patha.’ Tomorrow is the Martyrs’ Day. It is in this light that we are releasing the posters today.”

Urging the Government to release at least Rs.1 crore exclusively for Bahuroopi, Cariappa said, “last year, Rs.5.75 lakh was collected from ticket sales and Rs.3 lakh from stalls, but the total expenses incurred was Rs. 60 lakh. This year, Bahuroopi will cost an estimated Rs.1 crore. The Government support is far from adequate. The State Government, therefore, should be generous and earmark at least Rs.2 crore every year for Mysuru Rangayana in its budget.

“Nowhere in the country we have a museum exclusively for theatre. We are planning to set up such a unique museum of theatre and exclusive library in Rangayana premises,” he added.