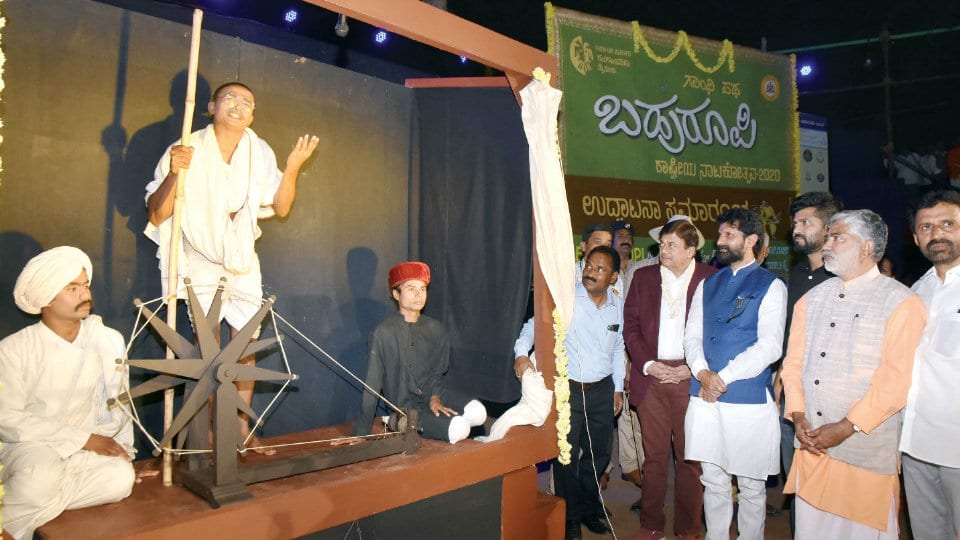 Mysore/Mysuru: O Lord Rama, descendant of Raghu, uplifter of the fallen… you and your beloved consort Sita are to be worshipped… all names of God refer to the same Supreme Being, including Eshwara and the Allah… O Lord, Please give peace and brotherhood to everyone, as we are all your children…

This “Raghupathi Raghava” Bhajan from ‘Nama Ramayana’ written by Sri Lakshmanacharya and adopted by Mahatma Gandhi to bring peace among Hindus, Muslims and other communities reverberated across Rangayana last evening and will continue to do so for the next five days as the six-day Bahuroopi Theatre Festival with the theme ‘Gandhi Patha’ (Gandhi’s Path) took off to a colourful start last evening.

A typical night celebrations with music and cultural events is usually held on the night of Mahashivaratri. But in Rangayana, the Shivaratri-like after-dark celebrations began last evening, eight days ahead of Mahashivaratri. The Rangayana premises that wore a deserted look last morning was transformed by evening with the entire Kalamandira campus dotted with colourfully-dressed people, youths, elderly, women and children while the interiors of Rangayana played out to the colourful inauguration amidst thunderous applause by people packed in every corner, including the balcony.

This year’s Bahuroopi has been built around the theme of ‘Gandhi Patha’ paying a tribute to the life, times and ideals of the Father of the Nation and commemorating Mahatma Gandhi’s 150th birth anniversary celebrations. We often witness questions that seek to know whether core of Gandhiji was ever explored adequately in modern literature and theatre. The truth of Gandhi, his life that continues to suffuse with time, should have made its way into our modern literature, performing arts and theatre.

Though truth and non-violence seem like a contradiction, they are not the only and final truth. The metaphors of ‘Salt-Charakha-Prayer’ can even be interpreted as ‘Poverty-Perseverance-Obedience’. ‘Gandhi Patha’ reminds us again about truth, non-violence, tolerance, equality, cleanliness, hard work, women empowerment, politics and philosophy.

Also, today we are faced with the question whether Gandhi is relevant to the younger generation. This relevance or the lack of it is open for debate at Bahuroopi.

Rangayana Director Addanda C. Cariappa describes Bahuroopi, “Our goal is to go beyond the ‘binaries’ and to walk towards the ‘path’. We are taking a small step from ‘Rashtra Pita’ to ‘Rashtra Patha’.”

Bahuroopi Theatre Festival was inaugurated at Vanaranga by acclaimed actor Anant Nag along with a host of dignitaries including Kannada and Culture Minister C.T. Ravi, Mysuru-Kodagu MP Pratap Simha, MLA L. Nagendra, Rangayana Joint Director V.N. Mallikarjunaswamy and Director Addanda Cariappa.  As Anant Nag unveiled the specially designed screen, the “Gandhi Patha” came alive with youth dressed up as a young Gandhi, a Gandhi who came to India from South Africa and the Gandhiji we all are familiar with — with his Khadi, Stick and a Charaka.

As the curtains of the Gandhi Patha unfurled, audience and the guests regaled as was evident in huge applause that echoed across, standing ovation and slogans “Mahatma Gandhi Ki Jai” that rent the air. Another attraction of the inauguration is three men depicting the proverbial principle “see no evil, hear no evil, and speak no evil” which are also Mahatma Gandhi’s favourite words.

Apart from the acclaimed play ‘Gandhi Vs Gandhi’, a bouquet of plays in various languages from across the nation will be staged at the fest. Folk artistes will sing and perform Lavanis and Tatva Pada based on Gandhi and poems written by renowned Kannada poets on Gandhi would be recited to a packed audience as part of the festival.