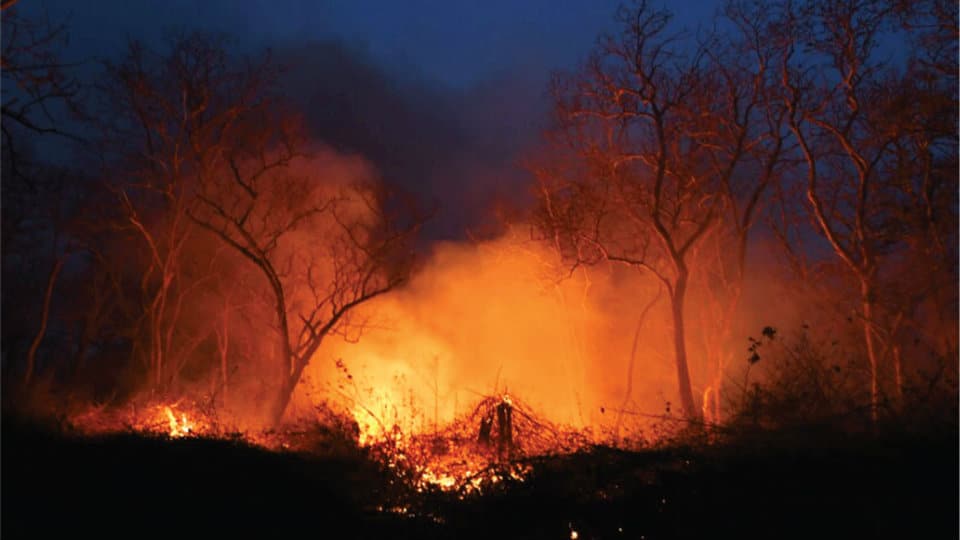 The wildfire that broke out on Saturday in Kalkare range of Bandipur National Park which claimed the life of a forest guard is yet to be brought under control.

The fire has now spread to N. Begur and Gundre ranges. This is the second major fire in region in the last three days

Reports from the inner ranges of the Tiger Reserve this morning said that more than 400 rangers and guards led by Bandipur Project Tiger Director T. Hiralal were fighting to bring the inferno under control since late yesterday night.

Counter-fire measures have been initiated and local people are helping the forest department to control the fire. Villagers are drawing water from bore-wells and are transporting it to the inner area of the forest, said sources.

The fire at N. Begur and Gundre ranges was first noticed on Sunday night and though it was brought under control, gusty winds carried burning cinders and fanned a fresh fire.

90% of the fire had been doused and it is yet to be controlled fully near Begur as the wind speed is a little high. The operation has become difficult due to scarcity of water as majority of the lakes in the region have dried up due to rainfall deficit, Hiralal told Star of Mysore.

“We are filling fire engines with water from bore-wells in nearby villages. Hundreds of ebony, teak and other valuable trees have been destroyed and even a few animals have died,” he added.

The officer said that dousing fire was their first priority and the extent of loss will be taken into account later.

Though the forest guards and tribals have formed small groups to extinguish the fire, gusty wind is making their task difficult as they are stoking fresh fires and there is little that fire lines can do to prevent it.

Along with dousing the fire, guards and watchers are also clearing dry lantana bushes so that there is no room for the fire to spread. Though major mammals may have escaped the fire, the young ones of animals, birds, reptiles and insects would have perished, officials said.