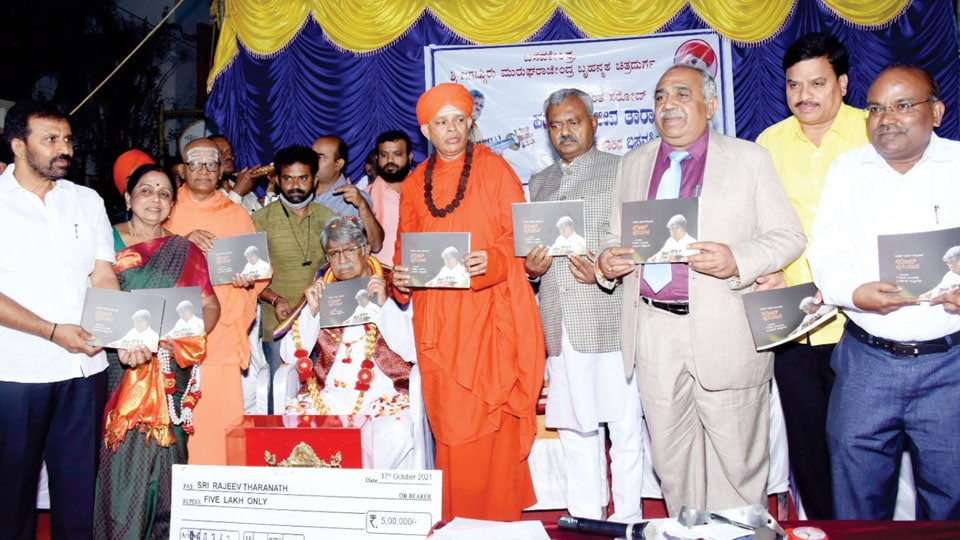 Mysore/Mysuru: Sarod Maestro Pandit Rajeev Taranath was conferred the prestigious ‘Basavashri’ award by Chitradurga’s Murugharajendra Bruhanmutt at a programme organised in front of the renowned musician’s residence at Saraswathipuram here yesterday. The award carries a cash prize of Rs. 5 lakh.

Speaking after receiving the award, Pandit Rajeev Taranath said that he was virtuous to have grown under the guidance of great musicians such as Ustad Ali Akbar Khan.

Pointing out that he will be completing 90 years of age next year, the Sarod maestro said that he will be often reminiscing on what all he has done as a musician in the past decades.

Observing that the contribution made by artistes from Karnataka for Karnatak music and Hindusthani music is unmatchable, he stressed on the need for carrying forward the rich legacy of Karnataka’s musical world for generations to come. He further said that he was blessed to become a recipient of the prestigious ‘Basavashri’ award.

Murughamutt Seer Sri Shivamurthy Murugha Sharana, who conferred the award on Pandit Taranath, said that the Mutt has been giving the award to outstanding achievers from different fields for the past 22 years.

The Seer also recalled his visit to the residence of late Sandalwood star Puneeth Rajkumar at Bengaluru sometime ago, when the two had discussed on why  ‘Basavashri’ award being given for exemplary social service can be considered as equivalent to Dadasaheb Phalke award in the film industry.