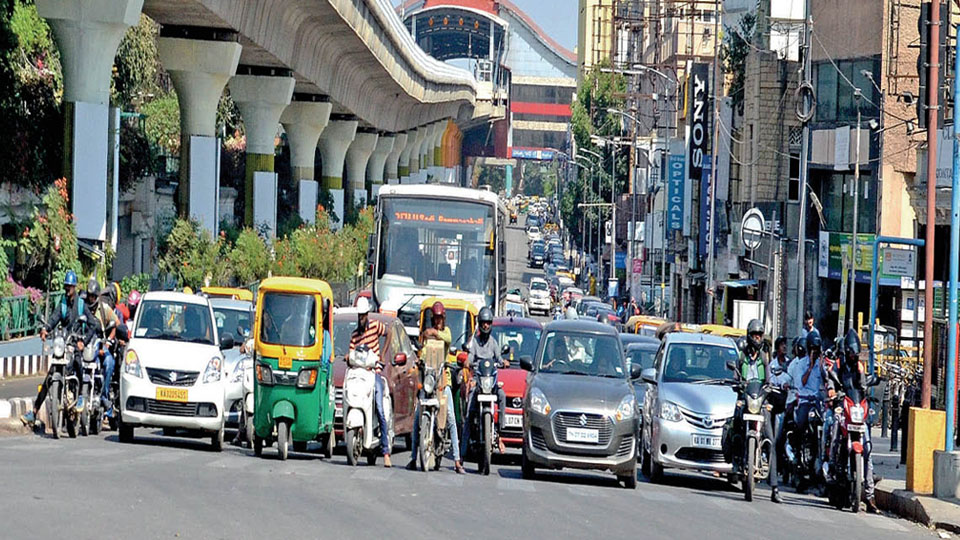 Mysuru/Bengaluru: After being under lockdown till now, many sectors in Bengaluru reopened their shutters this morning embracing the new-found normal and huge rush was witnessed in many parts of Bengaluru, especially at toll booths where vehicles made a beeline to enter the State Capital. The sea of humanity, however, sparked fears of the imminent third wave with more intensity and ferocity.

In Mysuru, however, things were normal as the lockdown is in place where shopping window has been allowed from 6 am to 10 am, on all days. It was business as usual for the Police, who were seen sending back shoppers to their homes soon after the clock struck 9.45 am. In Mysuru, the lockdown will be in place till 6 am on June 21.

Even as Bengaluru opened up today, the Mysuru Police took stricter measures to ensure that people followed lockdown rules. Barricades were set up on most of the roads and motorists were questioned about their whereabouts. “We just want to ensure that people do not assume that everything is open in Mysuru like Bengaluru. With different lock and unlock policies across the districts, things have become difficult for us in the field,” said a Police officer.

Traffic pours in on roads

India’s IT capital, Bengaluru, was among the first in Karnataka to see the easing of restrictions as the city recorded 1,348 new COVID-19 infections in a 24-hour period when compared to the daily infections that crossed 20,000 some days back forcing the Government to take tough measures.

The positivity rate in Bengaluru declined to 3.11 percent, according to Bruhat Bengaluru Mahanagara Palike (BBMP) yesterday. Chief Minister B.S. Yediyurappa has announced that Bengaluru and 18 other districts will see some relaxations of restrictions while 11 others, who are still witnessing a high positivity rates including Mysuru and Mandya, will remain under lockdown till at least June 21.

As Bengaluru city opened up this morning, over 50 to 65 percent rise was witnessed in the number of vehicles entering the city. Actually, vehicles started pouring in since last evening itself and the toll plazas witnessed huge rush.

Among the relaxations included are extended operational hours for essential shops (vegetables, groceries, milk, meat, etc). Industrial units can operate at 50 percent of the capacity but all other businesses will remain shut. Cloth and footwear merchants, jewellers and sweet vendors cannot resume business as yet. Standalone liquor shops are allowed from 6 am to 2 pm.

“Families that had left the city are returning. As the Government has not restricted intra-State and inter-State movement of private vehicles, the numbers are more since yesterday morning,” said a Police officer.

With the increasing crowds, however, the threat of a potential third also looms large, that is threatening the collapse of an already fragile healthcare system.