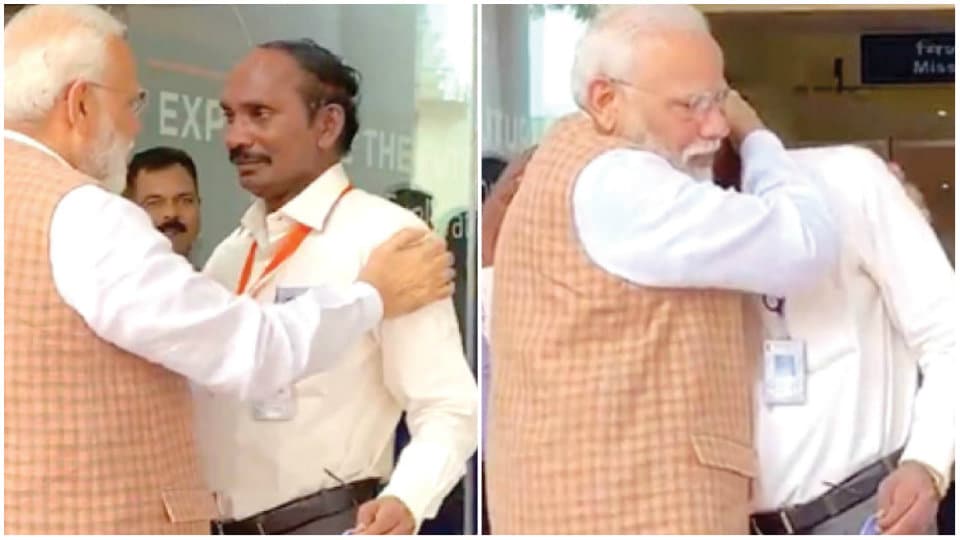 Best yet to come, PM Modi after contact lost with Vikram lander

Modi reaches out to ISRO Chief Dr. K. Sivan to shake his hand but the scientist broke down at which the Prime Minister hugged him with words of encouragement

Bengaluru:  India’s first attempt to land on the Moon may have gone off-script but the ambitious Chandrayaan 2 Mission has been far from a flop. With a mission life of one year, the Chandrayaan 2 Orbiter remains in operation and will continue to study the Moon from afar.

“Only 5 per cent of the mission has been lost — Vikram the lander and Pragyaan the rover — while the remaining 95 per cent — that is the Chandrayaan 2 Orbiter — is orbiting the Moon successfully,” an official of the Indian Space Research Organisation or ISRO said.

But following several tense minutes as the expected landing time of about 1:55 am lapsed, ISRO Chairman Dr. K. Sivan announced that communication had been lost with the lander. ISRO had acknowledged before the landing that it was a complex manoeuvre, which Dr. Sivan called “15 minutes of terror”.

The contact was lost with the Moon lander Vikram minutes before it was due to touch down near the lunar South Pole. If the landing was executed successfully as planned, India would have become the fourth country — after the United States, Russia and China — to soft land on the Moon.

Prime Minister Narendra Modi consoled an emotional ISRO Chief Dr. Sivan this morning after the space agency announced it lost contact with Chandrayaan 2 lander. PM Modi, who flew to Bengaluru last night to watch the planned touchdown of the Vikram lander, hugged the ISRO Chief as he broke down and patted him on the back after a speech at the space agency headquarters where he said: “Our determination to touch Moon has become even stronger and the best is yet to come.”

In his nearly 30-minute long address to the ISRO scientists, PM Modi said, “resilience and tenacity are central to India’s ethos”. “In our glorious history, we have faced moments that may have slowed us but they have never crushed our spirit. We have bounced back again and gone on to do spectacular things. This is why our civilisation stands tall,” he said.

“As important as the final result is the journey and the effort. I can proudly say that the effort was worth it and so was the journey. Our team worked hard, travelled far and those teachings will always remain with us. The learnings from today will make us stronger and better,” PM Modi added.

The successful launch of Chandrayaan 2 on board the giant GSLV Mark 3 rocket and its insertion in the lunar orbit was seen as a testament to India’s frugal space programme. The accomplishment has been likened by experts to firing a bullet from a moving train towards a target on another moving train hundreds of thousands of kilometres apart.

The Chandrayaan 2 mission stood out because of its low cost of about $140 million. The United States spent the equivalent of more than $100 billion on its Apollo missions. The mission also held great significance for future space exploration missions, including those to Mars.