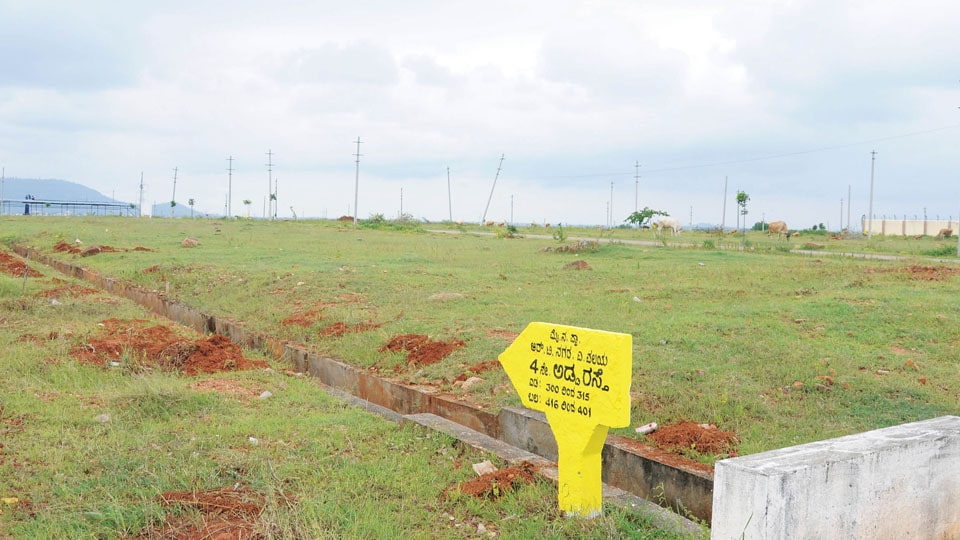 Mysore/Mysuru: Even as Mysuru Urban Development Authority (MUDA) has been warning citizens to double check the authenticity of documents before buying any landed properties, a 47-year-old person of the city has lodged a complaint with the Vijayanagar Police accusing some persons of cheating him Rs. 54 lakh by producing fake documents of a MUDA  site that did not exist.

K.P.  Sunil Kumar, son of K.C. Puttasiddashetty, a native of K.R. Nagar town and a resident of 11th Main, Vijayanagar 1st Stage, in a complaint lodged with the Vijayanagar Police on Dec. 19, 2020, said that he and his wife C.M. Jyothi stayed in the rented house and  planned to purchase a site in June this year, following which he asked one Shivakumar, who was known to him, to look for a suitable site in Vijayanagar for purchase.

Subsequently, Shivakumar introduced one person by name Anand, who said that a 60’x40’ site (Site No. 461) in Vijayanagar 4th Stage, Third Phase, was up for sale. Later Anand came along with his associates Manjunath and Puneeth and submitted Xerox copies of the said site (No. 461), when Anand said that the site belonged to one Ramalingegowda  and  he (Ramalingegowda) had pledged the original documents of the site with the City Co-operative Bank for obtaining a loan of Rs. 40 lakh.

Thereafter, Sunil Kumar visited the City Co-operative Bank to get confirmation regarding the pledging of documents, when the Bank Manager confirmed that the site documents had been pledged with the Bank as security for Rs. 40 lakh loan extended by the Bank to Ramalingegowda.

After getting confirmation from the Bank Manager, Sunil Kumar agreed to purchase the site for Rs. 54 lakh and entered into an agreement for the same on May 29, 2020. Later he gave two cheques for Rs. 3.5 lakh and Rs. 1.5 lakh to Ramalingegowda as advance after obtaining the documents from him.

Subsequently, Sunil Kumar  sought a Rs. 20 lakh loan from Navanagar Urban Co-operative Bank at Hootagalli upon presenting the documents pertaining to site No. 461.

After succeeding in getting the loan, Sunil Kumar asked Ramalingegowda to get the site registered in his (Sunil Kumar) name, to which he (Ramalingegowda) agreed.

On June 19, Sunil Kumar, his wife Jyothi, Shivakumar, Anand, site owner Ramalingegowda and his ‘wife’ Nagamma visited Mysuru South Sub-Registrar’s Office, when he paid Rs. 41,96,817 through RTGS from his account in Navanagar Urban Co-operative Bank and presented a cheque for Rs. 7,03,183 to Ramalingegowda.

Subsequently, Ramalingegowda got site No. 461 registered at the Sub-Registrar’s Office in the name of Sunil Kumar and Jyothi, with Ramalingegowda’s ‘wife’ Nagamma as witness. With the sale process completed after Sunil Kumar had paid Rs. 54 lakh in total for Site No. 461 at Vijayanagar 4th Stage, Third Phase, Sunil Kumar went to MUDA Office to seek Khata Transfer.

To his utter shock, Sunil Kumar was told by MUDA officials that one Ramachandra Nayak was the original site allottee. The MUDA had taken back the site after Ramachandra Nayak sought cancellation of the allotment and also there was no site in the name of Ramalingegowda.

The MUDA officials also told him that all the documents produced by Ramalingegowda were fake.

After realising that he had been cheated, Sunil Kumar went to Ramalingegowda’s native village Doddekoppalu in K.R. Nagar taluk when he learnt that Ramalingegowda owned no site and Nagamma, who signed as witness at the Sub-Registrar’s Office, was not his (Ramalingegowda) wife.

Following this, Sunil Kumar contacted Puneeth, who had introduced Ramalingegowda to him. Puneeth told him that two persons by name Riyaz Khan and Somesh had given the documents to Manjunath and Shashirekha, who in turn gave the documents to him (Puneeth) for disposing off the site, Sunil Kumar said in his Police complaint.

Sunil Kumar in his complaint has named Riyaz Khan, Ramalingegowda, Nagamma, Manjunath, Shashirekha, Somesh, Puneeth, Anand, Shivakumar, the Manager of City Co-operative Bank, Mysuru and some staff of the Bank as accused and sought criminal action against them for cheating him of Rs.54 lakh by producing fake documents for the said MUDA site.

2 COMMENTS ON THIS POST To “Beware of fake site documents: Man cheated of Rs. 54 lakh on ‘sale’ of MUDA site!”