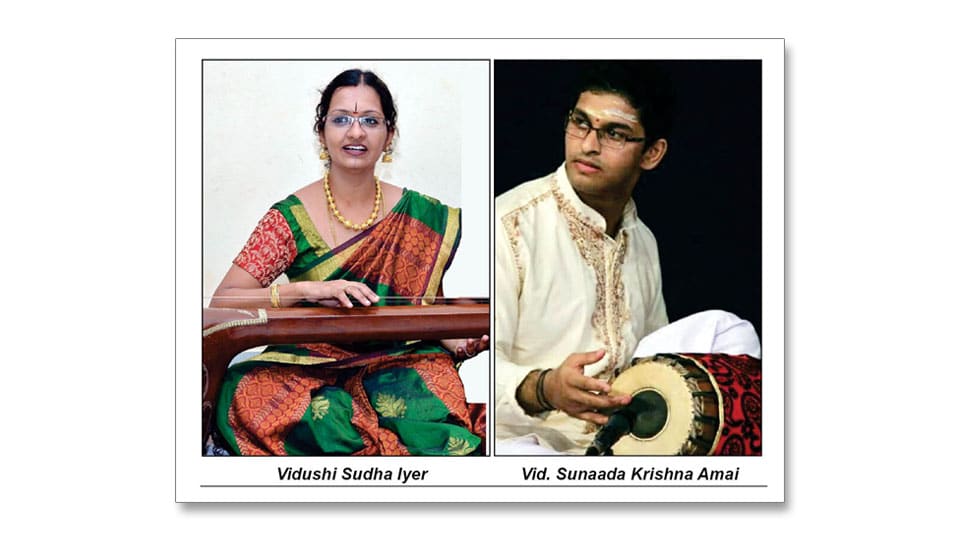 The award would be presented at a function on Mar. 24 (Saturday) at 6 pm at Alwar Kala Bhavana, Krishna Temple Complex, 6th Main, Gokulam 3rd Stage.

Sri Atmajnananandaji, President, Sri Ramakrishna Ashrama, Mysuru, will preside and deliver the benediction. Vidushi Koviladi R. Kala, an eminent vocalist and Vidwan S. Sudarshan, a renowned mridangist and advocate, will be the guests of honour. There will be a concert by the awardees following the award function. They will be accompanied on the violin by Vidushi Srividya Iyer and on the ghatam by Vidwan M.R. Manjunath.

Profile: Vidushi Sudha Iyer was born on Sept.28,1990 to Rama Subramanian and Gita at Kallidaikuruchi, Tamil Nadu.  She was initiated into vocal music by her mother (one among the Mayavaram Sisters Uma-Gita). She was under the tutelage of Vid. Calcutta  K.S. Krishnamurthy, till his demise, after which she continued her advanced training under Gita. She received training in violin from the age of five from Lalitha Raghavan, retired AIR staff artiste and top A grade violinist. She is the recipient of many prizes and awards.

She has performed before Dr. A.P.J. Abdul Kalam and also in many prestigious Sabhas in Chennai and other parts of India. She has toured the United States and Canada, as an accompanist on the violin in programmes of various organisations, including the Cleveland Thyagaraja Aradhana Festival.

Sudha has a Bachelor’s degree in Computer Applications; M.A. in Sanskrit and M.Music from The University of Madras; M.Phil — Study and translation of Harikeshanallur Muthiah Bhagavatar’s work, titled ‘Srimad Thyagaraja Vijayam’. She is currently pursuing her PhD. She is working as Guest Faculty in the Kalakshetra, Chennai.

Vidwan Sunaada Krishna Amai was born on March 20, 1999, in Karnataka to Dr. Kumara Subrahmanya Bhat and Vidushi Aruna K.S. Bhat. Vid. Krishna Amai hails from a family   of musicians. He has been trained in mridanga by Guru Vidwan Trichi K.R. Kumar, a Top Grade artiste, AIR, Mangaluru. He has passed Karnatak Tala Vadya Senior Grade Examination conducted by KSEEB, Bengaluru,  in mridanga (2015) and in vocal (2014), securing First Class Distinction in both. He has won many awards and prizes. Currently pursuing his B.A. in the Mylapore Samskrit College, Chennai, he has accompanied many top artistes.