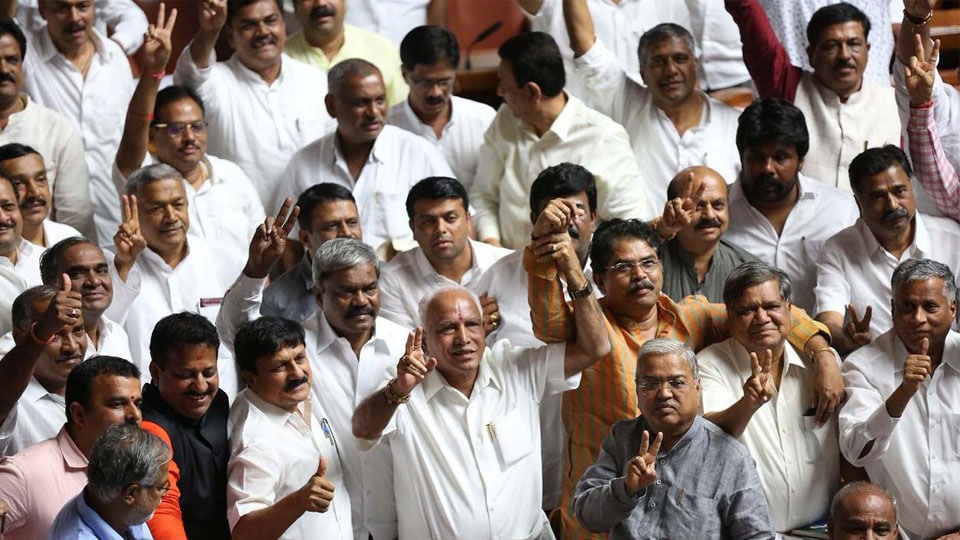 A day after the collapse of the Coalition Government, the residence of the Opposition BJP leader in the Assembly B.S. Yeddyurappa at Dollar’s Colony turned out to be a rosy one with large number of party leaders visiting and congratulating their leader who is all set to become the Chief Minister for a record fourth time.

Yeddyurappa said that he was awaiting advice from Central leadership to make the next move. Speaking to reporters  before meeting senior RSS leaders at ‘Keshava Krupa,’ the RSS Headquarters in Bengaluru this morning, Yeddyurappa said he had come to discuss issues with the RSS leaders and his next move on meeting the Governor or staking claim to form the BJP Government in the State will depend on instructions by the BJP Central leaders.

Yeddyurappa indicated that the BJP Legislature Party meeting will be held only after instructions received from the party Central leadership.

Sources in the BJP said that the Central leadership had asked Yeddyurappa not to come to New Delhi immediately until there was a final decision on formation of the next Government in Karnataka.

Meanwhile, reports reaching here said that the 15 dissident MLAs, whose resignation is yet to be accepted by the Assembly Speaker, have decided not to return to Bengaluru until there was clarity over the formation of the next Government. Currently they are staying in Mumbai and Pune.

Independent Lok Sabha member and film actor-turned-politician Sumalatha Ambarish, who won from JD(S) stronghold of Mandya with the support of the BJP, congratulated Yeddyurappa over the fall of the Coalition Government in her Facebook post and said, “I congratulate the future Chief Minister Yeddyurappa.”