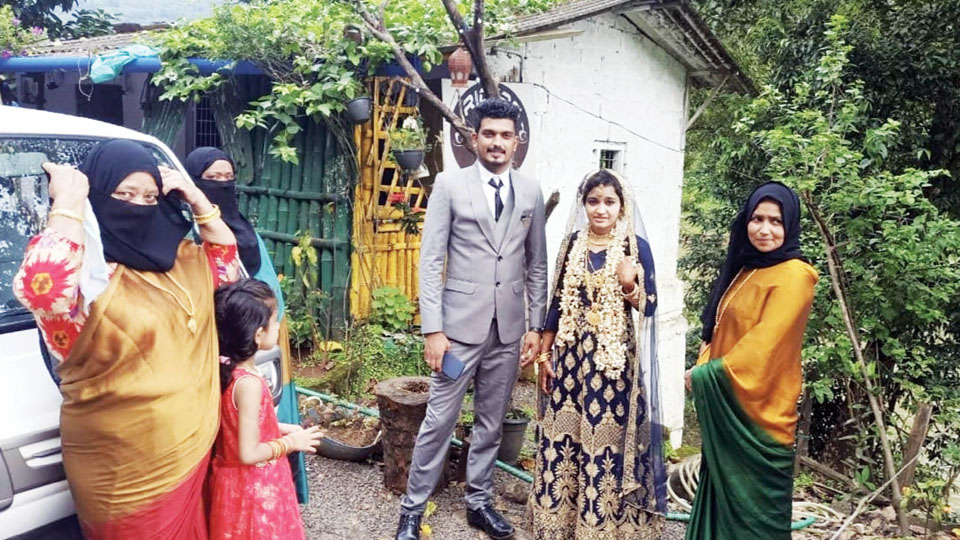 Kushalnagar: When COVID restrictions made it difficult for a Kerala groom to travel to Kodagu along with his relatives to fetch his bride, the bride did the next best thing — she along with her family brought the wedding to the Makutta border between the two States.

The incident occurred yesterday and the couple exchanged garlands by the side of the road amidst clapping by the relatives. As the pandemic is showing signs of revival in Kerala, the authorities of Kodagu did not allow the wedding party from that State to enter Kodagu where an elaborate ceremony was arranged at Pollibetta.

While the bride is from Pollibetta, the groom is from Mattanur in Kerala and as per plans, the groom was to come to Pollibetta but was stopped near the Makutta Gate. Negotiations with the border staff failed as RT-PCR negative reports not more than 72 hours were insisted to be produced.

Though the groom’s family claimed that they had undergone their tests and the reports were delayed, the authorities did not budge despite the wedding parties displaying the RT-PCR testing messages on their mobile phones. Without any alternative, the groom called up the bride and informed her that they were stuck at the border and were in no position to attend the ceremony.

Not willing to cancel or postpone the wedding, the bride and her family members took a couple of vehicles and rushed to Makutta from the wedding hall. Desperate attempts to gain entry did not yield any results. The staff manning the border did not relent and told them that the State Government rules had to be followed.

With no means of entering Karnataka, the bride and groom had to exchange garlands by the side of the road and the groom took her to his home at Mattanur. The bride’s family returned to the wedding hall and announced that the wedding was completed at Makutta and all had lunch and left the venue.

Virajpet Taluk Health Officer Yathiraj told Star of Mysore that they could not take the risk as COVID cases are on the rise in the neighbouring State. “Dasara is here and many in the wedding troupe from Kerala were showing symptoms. We prevented their entry as directed by the Government,” he said.