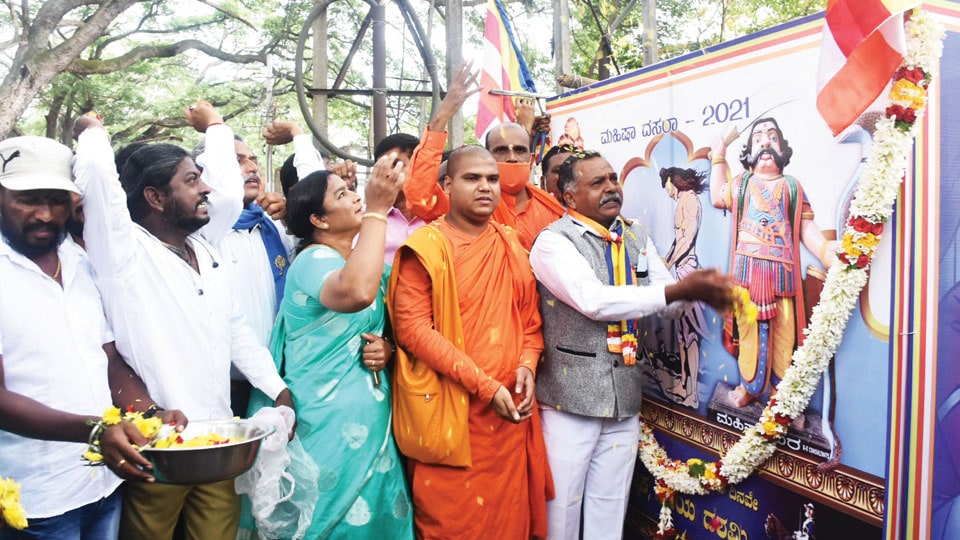 Mysore/Mysuru: Maintaining that Goddess Chamundeshwari does not represent Indians as a whole, former University of Mysore (UoM) faculty Prof. Maheshchandra Guru has warned of filing a PIL (Public Interest Litigation) in the Court against carrying of idol of the Goddess during the Dasara procession.

He was speaking at the Mahisha Dasara celebration organised under the aegis of Mahisha Dasara Aacharana Samithi at Dr. Ambedkar Park in Ashokapuram here yesterday.

Contending that carrying the idol of Chamundeshwari in the Golden Howdah during Dasara procession is an insult to the Constitution, Prof. Guru alleged that such a practice is an attempt to foist Hindutva forcibly on the masses. Observing that there is a big conflict going on between unilateralism and pluralism, Prof. Guru reiterated that Chamundeshwari is representative of only a uni-culture.

Urging the Government to carry the portraits of icons such as Mahatma Gandhi, Dr. B.R. Ambedkar, Mahisha and Nalwadi Krishnaraja Wadiyar in the Golden Howdah during Dasara procession, Prof. Guru asserted that Mahisha Dasara was not against the Government’s Dasara celebration.

Arguing that aborigines are celebrating Mahisha Dasara, he wanted the Government to stop carrying Chamundeshwari idol during Dasara procession at least from next year.

Demanding the Government to officially celebrate Mahisha Dasara, he said that it is the masses who should rule the country and not those who propagate a uni-culture.

Taking strong exception to NEP-2020 he said that this policy is aimed at driving the working class to slavery. He wanted the Government to come up with a policy that is inclusive of all sections of the society.

Gayathripuram’s Urilinga Peddimutt Seer Sri Jnanaprakash Swamiji, in his address, declared  that a grand  Mahisha Utsava will be celebrated next year under the title ‘Ashoka Vijaya Dashami’.

Pointing out that a mass ‘Dhamma Deeksha’ will be part of the celebration, the Seer insisted that they were not against anyone and only wanted the Government to officially celebrate Mahisha Dasara. Contending that the Samithi was only recalling history by celebrating Mahisha Dasara, the Seer said they believed in humanity and wanted to continue this tradition in the future too.

Earlier, a grand Mahisha procession was taken out from Vishwa Mythri Buddha Vihar near Ashoka Circle (Ballal Circle) to Dr. B.R. Ambedkar Park, passing through the main streets of Ashokapuram and Krishnamurthypuram.