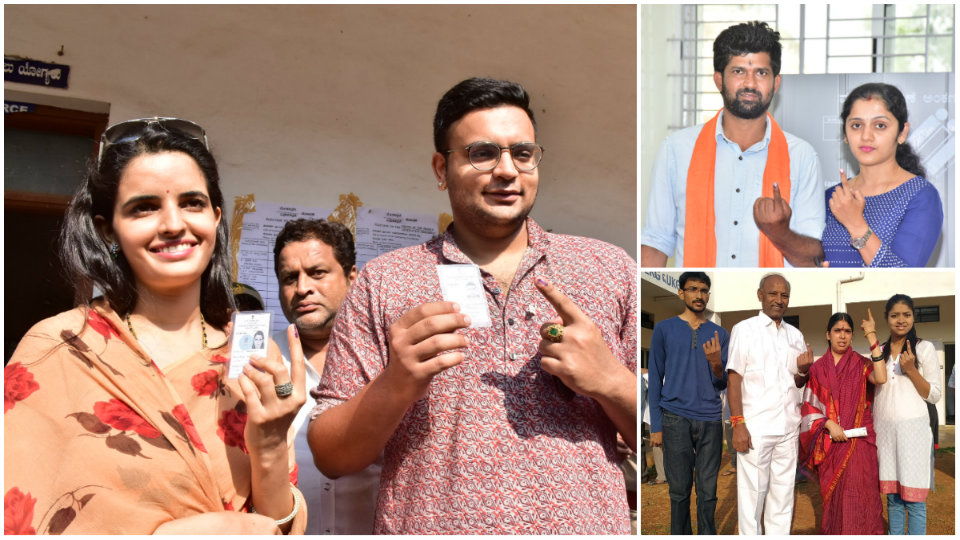 Mysuru:  With 14 Lok Sabha Constituencies going to polls today in the first phase of voting in Karnataka (second phase in the country), the polling for Mysuru-Kodagu LS seat began on a brisk note in the city this morning with voters seen lining up at many polling booths nearly 15 minutes before the voting began at 7 am.

Barring a few stray incidents, where polling began 15 minutes beyond schedule at a polling booth in Devaraja Mohalla (Booth No. 230) and at Booth No. 37 in JSS High  School, Vijayanagar 2nd Stage, as poll officials were reportedly late in conducting mock poll drill ahead of actual voting, polling went on smoothly across the city.

A copy of model ballot paper containing the list of all the 22 candidates in fray was seen pasted on a display board at all polling booths. Also, an official was posted at every polling booth to guide voters to their respective halls.

Former MLA Vasu cast his vote at a Polling Booth in Mahajana Educational Institution, Jayalakshmipuram, while former CM Siddharamaiah along with his MLA son Dr. Yathindra cast vote at his native village Siddaramanahundi in the taluk. District Minister G.T. Devegowda accompanied by his family voted at Gunghral Chatra in Yelwal Hobli of the taluk.

The Mysuru-Kodagu LS Constituency recorded a 20 percent voter turnout by 11 am, even as polling, which began on a brisk note, gained momentum as the day progressed and stood at 36% by 1 pm.

In Mandya, actress Sumalatha Ambarish, who is contesting as an Independent candidate backed by rebel Congress leaders, KRRS, BJP and other organisations, is engaged in a keen battle with coalition candidate Nikhil Kumaraswamy, son of CM H.D. Kumaraswamy, while JD(S) Supremo and former PM H.D. Deve Gowda is taking on veteran BJP leader G.S. Basavaraj in Tumakuru.

In Hassan, Prajwal Revanna, son of PWD Minister H.D. Revanna, has locked horns with A. Manju of the BJP, while Union Minister D.V. Sadananda Gowda is witnessing a tough battle with Minister Krishna Byregowda of the Congress, former Union Minister K.H. Muniyappa is taking on Muniswamy of the BJP in Kolar (SC) LS seat.

The Dakshina Kannada LS Constituency is witnessing a battle between sitting MP and BJP candidate Nalin Kumar Kateel and Mithun Rai of the Congress, while former Minister Shobha Karandlaje of BJP is taking on Pramod Madhwaraj in Udupi-Chikkamagalur LS seat.

Interestingly, the JD(S) which was allotted the Udupi-Chikkamagalur LS seat in a seat-sharing pact with coalition partner Congress, gave the ticket to Congress leader Pramod Madhwaraj, asking him to contest the seat on JD(S) ticket.

In Bengaluru (Central), two-time MP P.C. Mohan is taking on Rizwan Arshad of the Congress while in Bengaluru (South) greenhorn and young leader Tejasvi Surya of the BJP is taking on veteran Congress leader B.K. Hari Prasad.

Former Union Minister K.H. Muniyappa is taking on Muniswamy of the BJP in Kolar (SC) seat. Muniswamy, currently a BBMP Corporator, is giving a tough fight to veteran K.H. Muniyappa, who is seeking 8th consecutive term.

Another former Union Minister and former CM Veerappa Moily is facing veteran BJP leader B.N. Bachhegowda, a former Minister in Chikkaballapur. While Moily is seeking a third successive term, B.N. Bachhegowda who lost narrowly in the 2014 LS polls, is fighting for victory this time.

The rest 14 LS Constituencies located in the Northern part of the State will go the polls on Apr. 23, with Prime Minister Narendra Modi set to address BJP poll rallies at Chikkodi and Bagalkot later this afternoon.

The Bahujan Samaj Party (BSP) has fielded candidates in all the 14 LS seats that went to the polls today.

In Mysuru-Kodagu, B. Chandra is the BSP candidate while Dr. K. Shivakumar is the party candidate from Chamarajanagar and Lingaraju in Mandya.

The BSP has fielded former Karnataka State Backward Classes Commission Chairman C.S. Dwarakanath in Chikkaballapur to take on Veerappa Moily of the Congress and Bachhegowda of the BJP.

BSP Supremo Mayawati had addressed a poll rally at Maharaja’s College Grounds in city on Apr. 10.

Although the BSP is not a formidable force to reckon with the State, the number of votes it will get is expected to make an impact on the candidates contesting from the Congress and the BJP.

There are 22 candidates in the fray from Mysuru-Kodagu LS seat, including sitting MP and BJP candidate Pratap Simha, coalition candidate C.H. Vijayashankar of the Congress, B. Chandra of the BSP and 19 Independent candidates.

In Mandya too, there are 22 candidates in the fray, with the Constituency is witnessing a direct fight between Sumalatha Ambarish and Nikhil Kumaraswamy of JD(S).

After the voting ends at 6 pm today, the EVMs from all the 2,187 polling booths in Mysuru-Kodagu LS Constituency will be brought to the respective de-mustering centres at all the eight Assembly segments. Later, they will be moved to the strong rooms at Maharani’s College of Commerce and Management on Valmiki Road, Paduvarahalli (Vinayakanagar) in city under tight Police security till May 23, when the counting of votes will be taken up.