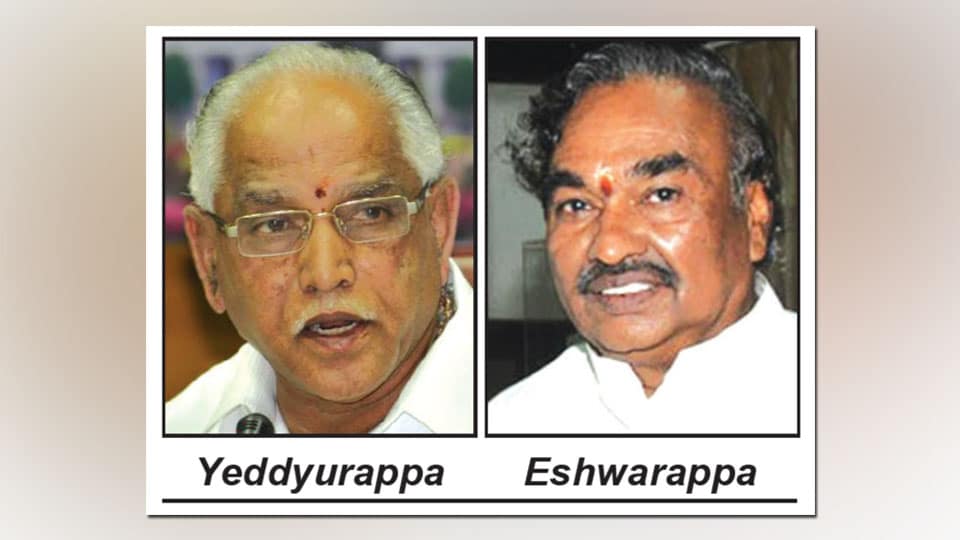 Bengaluru: Senior leader K.S. Eshwarappa’s tirade against State BJP President B.S. Yeddyurappa (BSY) may cost him the post of Leader of Opposition in the Legislative Council.

A section of MLCs in the Yeddyurappa camp, including D.S. Veeraiah, B.J. Puttaswamy and Lehar Singh Siroya, are said to be working towards divesting Eshwarappa of the post he holds in the Council, which is of Cabinet rank. These MLCs are of the opinion that Eshwarappa is misusing his position by running a campaign against Yeddyurappa.

The MLCs are likely to petition State Party in-Charge Muralidhar Rao, Union Ministers from the State and the BJP National President seeking the ouster of Eshwarappa, who has launched a tirade against Yeddyurappa.

Meanwhile, Yeddyurappa landed in the National capital on Friday to complain against Eshwarappa. Yeddyurapp’s intended meeting with BJP National President Amit Shah may not happen as Shah is set to leave for Jammu and Kashmir on a three-day visit.

As a result, Yeddyurappa is set to take up the issue with in-charge of the party affairs in Karnataka Muralidhar Rao and BJP National General Secretary (Organisation) Ramlal on Saturday.

Yeddyurappa, who is said to be carrying the CDs of the ‘Save BJP Rally’ organised by Eshwarappa group, is set to present a strong argument to expel Eshwarappa from the party. With this, he also wants to send a strong message to the dissidents.

“I will discuss the current scenario in the State BJP with my National leaders. I am keen to work unitedly with everyone in the party. But, a few leaders have crossed their limits,” Yeddyurappa said and added that it is a bit early to talk about the consequences if they refuse to change.

Yeddyurappa further said that several party MLCs were unhappy with the conduct and speech made by Eshwarappa at the Convention held at Palace grounds on Thursday. On the other hand, Eshwarappa, who is working to exert pressure on the party High Command to rein in Yeddyurappa, is planning to hit back at BSY by organising a rally under the banner of Sangolli Rayanna Brigade in Mysuru.

The Brigade is likely to hold a Convention at Mysuru on May 18, for which BJP National President Amit Shah and Union Home Minister Rajnath Singh will be invited, according to sources.

Meanwhile, Eshwarappa is said to have performed Ashlesha Bali Puja along with his family members at his Malleshwaranagara residence in Shivamogga yesterday. Former MLC Bhanuprakash too took  part in the rituals.