Home » News » BSY moves into ‘Cauvery’ on his 77th birthday 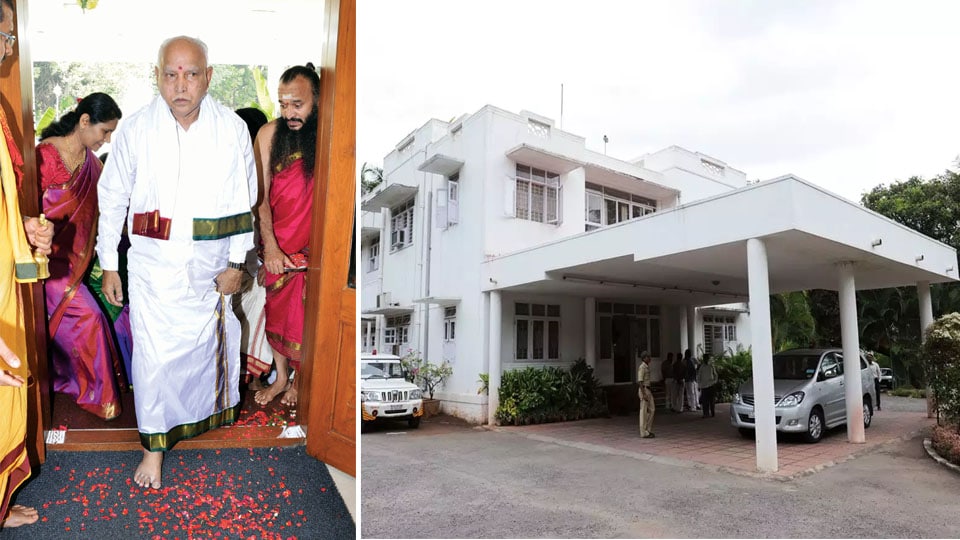 BSY moves into ‘Cauvery’ on his 77th birthday

Bengaluru: Chief Minister B.S. Yediyurappa now has  a new address. Yediyurappa, who is celebrating his 77th birthday today, moved into his official residence, ‘Cauvery’, this morning. The house was occupied by former Chief Minister Siddharamaiah for more than six years and he was reluctant to vacate the house.

Till now, Yediyurappa was functioning from “Dhavalagiri’, his Dollar’s Colony residence in Sanjaynagar. The CM was moving to and fro his office in Vidhana Soudha, CM’s home office ‘Krishna’ on Kumara Krupa Road and his residence in Dollar’s Colony. Since ‘Cauvery’ is located adjacent to ‘Krishna’, it will be convenient for the CM to switch between the two now.

Meanwhile, Yediyurappa is celebrating his 77th birthday on a grand scale at the Palace Grounds in Bengaluru this evening. There is a felicitation for him where many VVIPs are scheduled to attend.

A host of leaders are expected to gather under one roof, keeping political and personal rivalries aside to celebrate Yediyurappa’s birthday. From arch-rivals Congress leader Siddharamaiah and JD(S) leader H.D. Kumaraswamy to party colleague B.L. Santhosh, National Secretary (Organisation), BJP, a host of political heavyweights are expected to take part in the event.

A felicitation volume in Kannada with 78 articles from a cross-section of people, including politicians, writers, bureaucrats, and spiritual leaders, a coffee table book of photographs, and a documentary will be released on the occasion.

READ ALSO  Dr. Bhyrappa asks CM to Save Kannada from the onslaught of English

Yediyurappa is the only Chief Minister beyond the age of 75 to be in power from the BJP. The CM, however, has requested his well-wishers to refrain from presenting bouquets, garlands or gifts or bursting crackers to mark the occasion. Yediyurappa’s birthday comes barely a week ahead of the much-anticipated tabling of the State Budget on March 5.